Prime A Fascinating Irish Jewish Past and an Uncertain Future 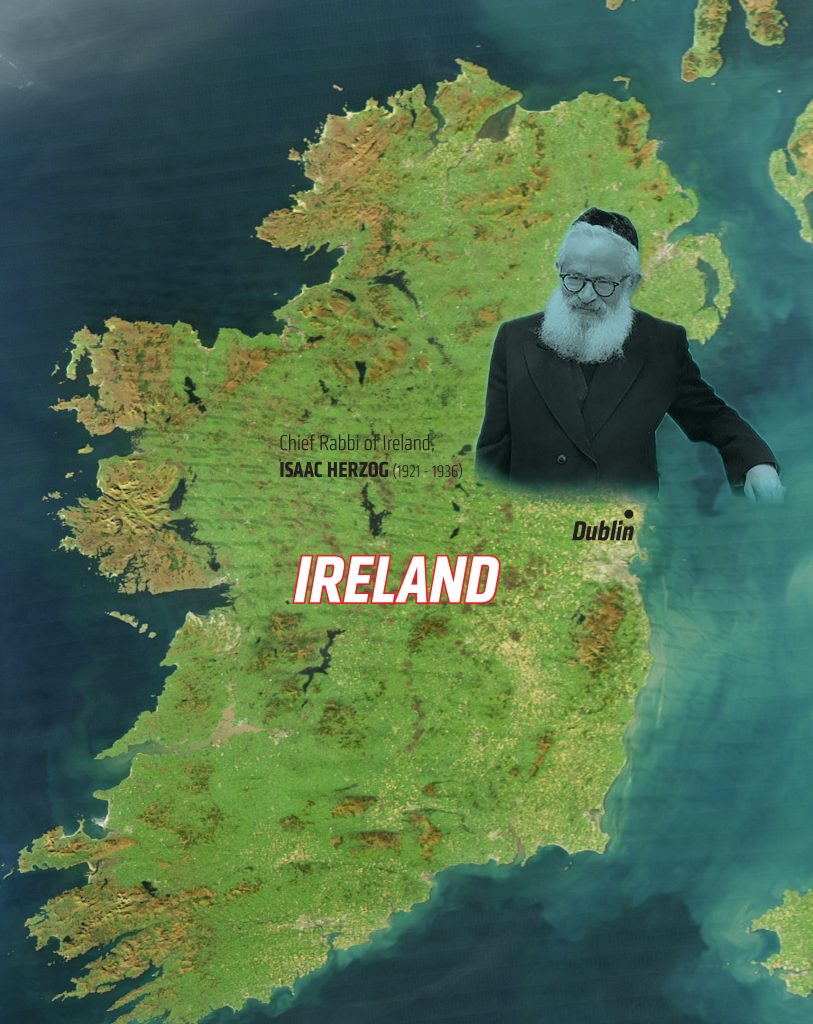 Hungarian and Polish Jews, or, for that matter, Yemenite or Moroccan Jews, are well known, with a great deal written about their history and customs, but raise the subject of the Irish Jew and your listener assumes you are about to tell a joke. No doubt a few people will know that former Chief Rabbi of Mandatory Palestine and then the state of Israel, Isaac Herzog, was previously the Chief Rabbi of Ireland, but with this sole exception they are unlikely to know much else about Jewish life in Ireland.

How can you be Jewish and Irish?

Without doubt, the small size of this Jewish community goes a long way to explaining why Irish Jewry merits little more than a footnote in the long saga of Jewish history. Popular ideas about this country and its inhabitants also make the concept of an Irish Jew seem more than a little incongruous. Many people seem to have the impression that you must be a Catholic, a heavy drinker and a tough brawler to qualify for the title of Irishman. When I lived in England some 40 years ago, I remember the English made a virtually automatic association between the Irish and bricklayers since so many Irishmen came to England to work in the construction industry. Perhaps Americans would make a similar instant association between the Irish and the archetypical New York police officer.

A Potted History of Ireland

From the early medieval period until the 1920s, the whole of the island we call Ireland was ruled by the English. After a revolt in 1916, the 26 southern counties gained their independence — as the Republic of Ireland or Eire. The six counties in the northeast of Ireland remained under English rule as Ulster or Northern Ireland. For the most part the Republic of Ireland is Catholic while Ulster is predominantly Protestant, and this religious divide has led to many years of violent conflict.

The Last Jews of Ulster

The Republic of Ireland’s Jewish community has always been the larger one, but the Ulster community also numbered well over 1000 up until the violent unrest in the late 1960s and 1970s. It is interesting to note that Jews were not specifically targeted in this sectarian violence. Apparently, once a Jew was stopped by one of the gangs and asked his religion. When he said he was Jewish, they asked, “But are you a Protestant Jew or a Catholic Jew?”

Yet the damage the unrest caused to the economy and a long period of political uncertainty contributed to the community’s decline. Today the Jewish community in Ulster is a pale shadow of its former self with just a few hundred members. If you see Israeli flags waved in Ulster today they are more likely to be in the hands of Protestant militants than Jews. These Protestants choose to identify with the Israeli side of the struggle simply because the Catholic IRA supports the Palestinian Arabs.

The First Signs of a Jewish Presence in Ireland

There is evidence of a small Jewish community in Ireland in the 1200s, but it appears to have disappeared with the 1290 Expulsion from Britain. Jews returned to Ireland in the sixteenth century after the Expulsion from Spain. One of these Sephardic immigrants, William Annyas, was appointed major of Youghal, County Cork, in the 1550s. Records exist of a synagogue in Dublin as early as 1660, but most of the current Jewish community came to Ireland from Eastern Europe fleeing czarist persecution at the end of the 19th and start of the 20th centuries. According to legend, some of these Jews mistakenly believed they had reached the U.S.A., and perhaps some unscrupulous shipping companies helped convince them this was so.

The Community’s Growth and Decline

The largest community was, and still remains, in the capital city of Dublin. By the mid-20th century, over 5,000 Jews lived in Dublin. Jews also settled in Cork, and Limerick, and a few other larger towns. For the most part the local population was friendly toward the new Jewish neighbors. In comparison with the Jewish experience in so many other countries, Irish Jews have not encountered much anti-Semitism. The sole exception came in the form of a pogrom against the Jews of Limerick in 1904. This episode deserves an article in its own right, but although it was a serious incident, nobody was killed or seriously injured. The Catholic priest who incited the riot launched a BDS-type boycott of Jewish businesses. He was widely condemned, and influential Irish Nationalist leader Michael Davitt even visited the homes of the Jewish victims to express his sympathy.

The Jewish community in the Republic of Ireland reached its peak in the 1940s and 1950s but then went into a rapid decline. Sadly, many Jews were lost to assimilation. The establishment of Israel in 1948 also encouraged many Irish Jews to emigrate. More observant Irish Jews have moved to Manchester or London with their larger and sustainable communities possessing all the educational, religious and cultural institutions to support a full Jewish life. Others have moved in search of spouses or a better livelihood.

Today the Jewish communities established in the south and west of Ireland have ceased to function. In the main Jewish area of Dublin there were once six synagogues, including the curiously named Mary’s Abbey Synagogue. What remains of the Republic of Ireland’s Jewish community today is a nucleus in Dublin with one mainstream Orthodox synagogue open around the year. Dublin also has a Machzekei haDas synagogue with a stronger Orthodox flavor, but they only support minyanim on Shabbos morning and Yamim Tovim. The decline in synagogue numbers and attendance is a clear sign that the capital’s Jewish community has also been on the retreat.

Over the last few decades, a hi-tech boom and membership of the European Union led to an economic upturn in Ireland. These opportunities have attracted a modest immigration of Jewish professionals from Israel and North America. Their arrival has reversed the decline in the Jewish population in Dublin, but a vibrant community is not simply a numbers game — it requires a strong identity and Jewish commitment. In this respect it is hard to see how the newcomers’ arrival is sparking a real revival of Irish Jewry.

One factor affecting the future of Ireland’s tiny Jewish community also affects the wider population of this country — the fallout from Brexit. The latest episode in the stormy relationship between the English and the Irish focuses on the future of the 310-mile border between Northern Ireland and the Republic of Ireland. This is not a dispute over the position of the border, but over the nature of the border after Brexit.

Free border passage was one of the main foundations of the 1998 agreement that ended 30 years of bitter struggle between the Loyalists who want the province to remain in the U.K., and the Republicans who want all of Ireland united under a single government. While both the U.K. and Republic of Ireland are members of the EU, it is easy enough to allow free passage across the border. Each day thousands of people cross in both directions for business and personal visits. The burning question is what will happen to this border post-Brexit. One thing that both the Unionists and Republicans agree on is they do not want to see a closed border with security and custom checks.

Former Prime Minister, Theresa May negotiated a temporary customs union with the EU that has come to be known as the “Backstop” deal. For some unspecified period certain EU regulations would continue to apply in Northern Ireland with goods imported from other areas of the U.K. having to conform to EU standards. Mrs. May faced fierce opposition to this deal from many MPs in her own party who want a full break with the EU. Her allies in the Northern Irish Democratic Unionist Party (DUP) also oppose a backstop. They argue that it would effectively move the border to the middle of the Irish Sea and create the political division between Northern Ireland and the rest of the U.K. that they have been opposing for well over a century.

The ideal would be to reach a comprehensive trade agreement between the U.K. and the EU, but this is proving very elusive. Since a majority of the British electorate voted to leave the EU, the British government faces strong pressure to make a total separation. At the same time, the EU is unwilling to significantly improve its Brexit offer. Prime Minister Boris Johnson believes that some technological solution can be found to monitor the Irish border without impeding the free flow of traffic and goods. This might sound like an attractive solution, but nobody has yet come up with a practical detailed plan explaining how it could be implemented.

French President Emmanuel Macron met with Boris Johnson and told him that Backstop is essential to “preserve stability in Ireland and the integrity of the single market.” However, Johnson’s weak political position leaves him with little ground to yield. Most commentators expect him to call an election in the autumn even though the prospects of any future British government coming to a satisfactory arrangement over the Irish question do not seem to be great. In connection with a much earlier Irish crisis, British Prime Minister W.E. Gladstone remarked, “Ireland! Ireland! That cloud in the west, that coming storm … Once again we can see the wisdom of King Solomon’s famous words: ‘There is nothing new under the sun.’”