Prime Druze on Annexation: Include Us Out 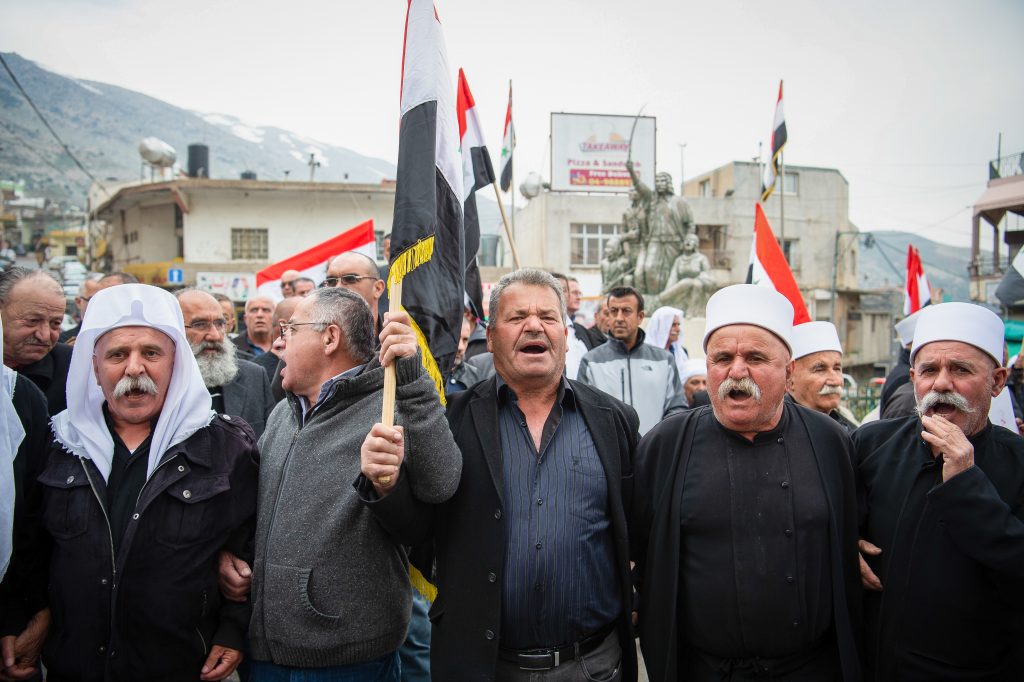 Nearly 30,000 Druze Arabs live in the Israeli Golan Heights. This week they came out en masse to protest against the American announcement recognizing Israel’s sovereignty over the Golan. Though they have been disengaged from Syria since 1967, they are still loyal to Damascus. Don’t they realize that the Syrians won’t be returning to the Golan any time soon?

The declaration by President Donald Trump that he views the Golan Heights as an integral part of Israel’s sovereign territory warmed the hearts of many Israelis this past week — including those who were suffering from the cold stormy rains, as well as those living in the Hamas rocket-targeted areas on the Gaza border.

But the joy was somewhat marred by the Druze protest demonstrations that were held on the Israeli side of the Golan. These rallies were marked by the waving of Syrian flags and repeated oaths of loyalty to Damascus and to Syrian President Bashar Assad. Israel definitely has a problem with these Druze residents; they reside here physically, but their hearts are in Syria. They are unquestionably a fifth column that is liable to cause us not a few problems if, Heaven forbid, any type of military conflict develops in northern Israel.

Don’t the Druze realize that the Syrians aren’t returning to the Golan in the foreseeable future?

To understand this matter, a little history of the region and of its Druze inhabitants is in order. The Druze faith sprouted in Egypt 1,000 years ago, amidst the encounter between the Shiite branch of Islam and Greek philosophy. The Druze religion is secret, with its main tenets passed down through the generations only by its elders and sages; rank-and-file Druze adherents do not study them. In addition, Druze religious texts are not printed or published, but are hand-copied in limited numbers. A Druze house of worship is called a khalwa, and only Druze wise men gather there for prayer. Although the religion originated in Islam, they do not view themselves as Muslims, and do not share Muslim beliefs.

The Druze in the Middle East live mainly in mountainous areas. They reside as minorities in three countries — Syria, Lebanon and Israel — yet they hold disproportionately significant political strength in each. With no state of their own, some Druze regard themselves as a religious group, while others define themselves as a nation in formation. Altogether, the Druze number fewer than 1.5 million people.

Given their statelessness, the Druze have developed a tradition of loyalty to the country in which they live. Some explain that this is simply a method by which to survive as a minority under hostile rule. Thus, the Druze in Syria are loyal to Assad, the Lebanese Druze are faithful to the Lebanese government, and in Israel — for many years — they were loyal to, and cooperated with, the Jewish State.

This has been their tradition of loyalty to sovereign rule in every country, due, perhaps, to the necessity to adapt, or simply the result of the realities of life. Recognizing that they are always a minority, this approach of “local integration” reduces their points of friction with the majority. The civil war in Lebanon disrupted the Druze integration somewhat, but in Israel and Syria it exists even today.

In Israel, the Druze were formally recognized as a religious community back in 1957, at which time Israel began drafting them for compulsory military service in the IDF. Following the 1967 Six-Day War and the Israeli conquest of the Golan Heights, the Druze of Syria were added to the Israeli Druze community. Numbering some 20,000-30,000, they largely fell between the cracks, because they never conclusively answered this fundamental question: Should they transfer their loyalty to the Israelis — their new rulers — or should they remain true to Syria?

Under Syrian influence, and in solidarity with the many family members they left behind, the Druze of the Golan developed a policy of opposition to Israeli rule. When Israel annexed the area in 1981, the Druze received Israeli ID cards — which most of them refused to accept. And among those who did agree to take them, a large number handed them back, under pressure and threats from Damascus.

Geographically, the Golan is much closer to Damascus than to Yerushalayim. If the gates of the Golan were opened, the Druze could drive to the Syrian capital in a half-hour. And though the border remains closed, they manage to maintain very close ties to their relatives in Syria. It must be kept in mind that almost every Druze family in Israel has relatives in Damascus, including many high-ranking army officers and government officials.

A long-standing icon of the ties between the two sides is the Hill of Shouts. This site, adjacent to the village of Majdal a-Shams, is actually two hilltops straddling the Israeli-Syrian border. Quite frequently, though not as often as in pre-Skype days, Druze on both sides gather as near as they can to each other, and “converse” with each other via screams and shouts. They hold up newborn babies and introduce newly-engaged or married couples. This, possibly more than anything else, reflects the refusal of the Golan Druze to accept their separation.

Throughout the 52 years of Israeli control in the Golan, the Druze there have waved Syrian flags alongside their own Druze flags. The latter, with stripes of green, white, blue, red and yellow, are proudly unfurled in the various Druze villages. The Druze emphasize, however, that this is only their “religious” flag, while their “national” flag remains that of Syria.

Ever since 1967, they have done everything possible to avoid forming unnecessary ties with the State of Israel. They have been hoping all this time that, sooner or later, Syria will recapture the area, thus enabling them to be reunited with their relatives.

But even they are finally beginning to internalize that the return to Syrian sovereignty is not in the cards for the short- or medium-term. Eight years of civil war in Syria, which have all but destroyed the country, have made this increasingly clear.

It’s true that over the past two years, hints of the beginning of a change have begun to emerge. Many Druze in the Golan have begun to realize that they should consider forging closer ties with Israel. But then Assad began to stabilize his regime — and many Druze once again began to straddle the fence, waiting to see which way the wind would blow.

Now another wild card has been dealt them, in the form of Trump’s recognition of Israeli sovereignty and the resulting storm of protest in the Arab/Muslim world.

Many Arab faces around the world were turned towards the Golan Heights Druze to see how they would respond. At first, they were silent. But under pressure from their frightened family members in Syria, they soon came out with an announcement that, despite Washington’s stance, they are remaining true to Syrian sovereignty in the entire Golan.

But deep down, now more than ever, the Druze in Israel realize that the chance that Damascus will ever rule them is minute. They will continue, for now, to put on a front of loyalty to Syria. In practice, however, the thinking in Israel is that their loyalty will gradually shift to their current ruler: Israel. It could take some years, but it is expected that the Druze will revert to their centuries-old tradition of “follow the ruler.”

It must be made very clear: The difficulties facing the Golan Druze are those of a community that has lived under Syrian rule for centuries. This is not at all the situation for the Druze who have been living in Israel since 1948. Though they now number nearly 100,000, they were only 14,500 when Israel conducted its first census in 1950. They reside in 17 villages and one city — Shfar’am — in the Galilee and the Carmel area. The Druze in the Golan live in only four different villages.

In general, relations between Jews and Druze in Israel are good — even close. “We are brothers,” the Druze leaders often declare, and the feeling on the part of Israeli officials is mutual. Not a few Druze have attained top positions in the IDF and government offices.

Basically, the Druze populace views itself as an intrinsic part of the State of Israel. On the fringes, however, are extremists drawn to hostile propaganda.

Finally, let us not forget the historic ties between the Druze and the Jewish People, which began back in Egypt with none other than Moshe Rabbeinu. The Druze consider Yisro, Moshe’s father-in-law, as their founding prophet. Druze leaders say as follows: “We fulfill our prophet’s desire to protect the Land of Israel for the People of Israel. But Israel must also remember who it was that accompanied them in the desert…”

In short, the Druze are able to live with everyone, but they retain their own sense of identity and tend to remain closed off from others. Chronologically, the Druze and their religion appeared on the stage of history long after Judaism, Christianity and Islam. This forced them to develop an iron will vis-à-vis the hostility of the older religions, especially Islam.

The world in which the Druze live is full of enemies, albeit not totally black-and-white. A Druze proverb lists those who hate them in descending order: First the Sunnis, then the Shiites and Christians, and finally the Jews. That is, even the Jews are not totally trusted; though they were never a physical threat to the Druze, they are still included in the Druze definition of “the other.”

The Druze believe that they have a special relationship with the Jews. They see themselves and us as two peoples linked together by strong bonds of faith and history, citizenship and patriotism — yet still standing on separate tracks.