Prime Crimes and Misdemeanors: What Constitutes Grounds for Impeaching a President? 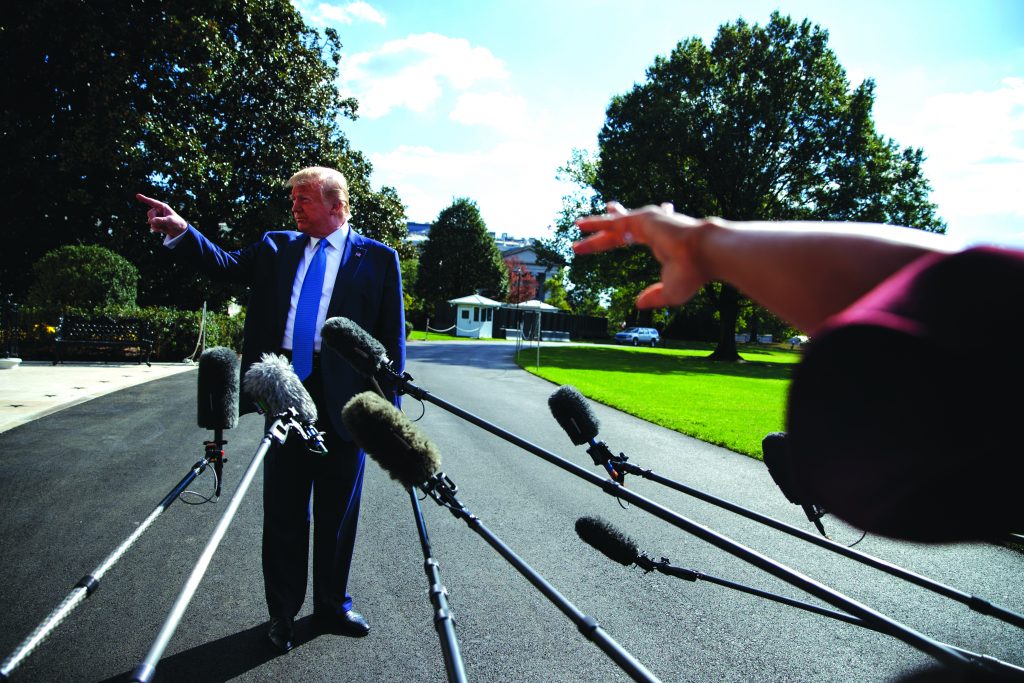 “Impeachment” is a word that has been on the lips of many of President Donald Trump’s outspoken opponents ever since his inauguration. Yet, more than two and a half years into his administration, and after an investigation that focused initially on collusion with Russia over election interference proved inconclusive, Democratic Congressional leadership remained cool to the idea.

That all changed a few weeks ago after a whistleblower complaint forced the White House to release the transcript of a conversation between the president and his Ukrainian counterpart. Whether or not a quid pro quo of political dirt in exchange for military aid or an attempted cover-up existed or can be proven, clear evidence of a sitting American president pushing a foreign leader to investigate a political rival has been enough to throw impeachment inquiries into full throttle.

Politicians — and most of the media coverage of events — have largely focused on the facts surrounding the phone call in question and the political implications of working to remove the president from office. However, an undertaking of such constitutional and historic significance also raises important questions about appropriate uses of the impeachment process and the $64,000 question of what constitutes an “impeachable” offense.

The Constitution says that a president or vice president can be removed from office for having committed “treason, bribery, or other high crimes and misdemeanors.” While the first two offenses are relatively clear, scholars have long noted the vagueness of the second pair.

“It’s conceivable that you could dig up what ‘high crimes and misdemeanors’ meant before the Constitution, but I don’t know of any accepted definition,” Robert William Bennett, a law professor at Northwestern University and constitutional expert, told Hamodia. While quick to admit that he had not studied the history of the phrases, he said that the choice of words rings odd to modern ears, and determining their meaning leaves much room for conjecture.

“It’s sort of an awkward phrase: ‘high crimes’ sounds like it has to be a major offense, but at least we use ‘misdemeanor’ to mean something pretty minor. Whatever the exact historical context was, I assume that they must have meant something pretty serious.”

The confusion is not new to American history and neither is the idea of leaving Congress a good deal of latitude in its application. In 1867, as talk of impeaching President Andrew Johnson was picking up steam, an article in the Atlantic Journal struck a very similar note.

“What, then, is the meaning of ‘high crimes and misdemeanors,’ for which a President may be removed? Neither the Constitution nor the statutes have determined. It follows, therefore, that the House must judge for what offences it will present articles, and the Senate decide for what it will convict,” the article said.

President Gerald Ford, then House minority leader, voiced a similar position in 1970, when he said that “an impeachable offense is whatever a majority of the House of Representatives considers it to be at a given moment in history.”

According to an article by the Constitutional Rights Foundation, which designs educational material about the Constitution, the phrase “high crimes and misdemeanors” was adopted with little debate among the delegates in Philadelphia in 1787, as the words were well understood at the time to connote abuse of the powers granted by a superior government office, a use that had been accepted in English common law dating back to medieval times.

In an essay known as Federalist No. 65, Alexander Hamilton backed up this understanding by defining impeachable offenses as “those offences which proceed from the misconduct of public men, or in other words from the abuse or violation of some public trust.”

Irrespective of the framers’ original intent, some have commented that the lack of precedent imposes an additional layer of ambiguity. Presidents Andrew Johnson and Bill Clinton both faced impeachment proceedings, but both were acquitted by the Senate, and President Richard Nixon resigned before the House could vote on the articles of impeachment drafted against him. As such, there is no hard record of what any Congress ultimately felt were legitimate grounds to remove a president from office.

Gene Healy, a vice president at the Cato Institute, who specializes in federalism and executive powers, said that while the language does present “a lot of gray area,” the historical record is more telling than some assume.

“It’s really only a technicality that we haven’t removed a president through impeachment. Nixon quit because he saw the writing on the wall and thought he would not survive, so we really can look at Nixon as a paradigmatic presidential impeachment case,” he told Hamodia.

The three articles that the House Judiciary Committee had approved against President Nixon were for obstruction of justice, abuse of power, and contempt of Congress, i.e., not complying with the Congressional investigation on the Watergate break-in.

Mr. Healy added that the constitutional framers’ language was intentionally left broad to account for a wide variety of situations that might amount to an abuse of high office.

“You could never design an impeachment code that would enumerate all possible offenses that might justify removing an official. The human imagination isn’t that broad,” he said.

For some time now, many voices on the political left have said that Congress’ failure to pursue impeachment of President Trump would represent a shirking of their constitutional duty. Yet, several scholars have commented that yet another reason for the Constitution’s vagueness regarding impeachment is meant specifically to leave the matter to Congress’ judgment, rather than to prescribe a legal code.

“The conventional wisdom is that [Congress] gets to make a political decision as to whether impeachment makes sense,” said Professor Bennett. “Congress gets to exercise a great deal of discretion in deciding whether to impeach and then whether to convict.”

Citing the present case as an illustration, Professor Bennett said that he had no desire to have President Trump remain in office, but felt that impeachment proceedings, likely to end in acquittal in the Republican Senate, would only strengthen the president’s chances of reelection. As such, he felt that to avoid impeachment would be both a prudent and legitimate road for Congress to take.

Mr. Healy said that while legal precedent and constitutional analysis can answer some questions about impeachment, political questions by their very nature have to be left to context.

“We know that obstruction of justice is impeachable because that is part of what Nixon and Clinton were charged with, but this is a mixed political and legal process. The law can’t tell you if any specific case of obstruction of justice merits the removal of a president and it can’t answer questions like if a charge comes up too close to an election, should you just let the voters decide,” he said. “We do hope that Congress makes a political decision as well, not in the narrow sense of what’s the most popular with their constituents, but what in the broader sense is best for the country.”

While “crimes and misdemeanors” seems to connote doing something illegal, both the historical use of the terms and the record seem to prove this reading incorrect.

Congress has utilized impeachment a little over a dozen times against lesser officials, mostly federal judges. In what is one of the earliest and most colorful examples, in 1804, Judge John Pickering was removed “for appearing drunk, and frequently, in a profane and indecent manner, invoking the name of the Supreme Being.”

In the same year, Justice Samuel Chase, a member of the Supreme Court, was removed from office for issuing arbitrary judgments that Congress felt betrayed a deep bias against members of President Thomas Jefferson’s Republican-Democratic party.

Mr. Healy said that these and other examples from the times when many of the constitutional framers were still in Congress prove that breaking the law was not the intended threshold of impeachment.

“The framers clearly did not want to limit impeachment to violations of criminal law or constitutional code. In fact, for decades there was hardly any federal criminal law to speak of, and if they wanted to limit it to crimes, that is not the record that we have from early on,” he said. Mr. Healy went on to cite a discussion of impeachable offenses at the constitutional convention that centered on a president who overused his power of pardon to excuse political allies.

As for the present controversy over President Trump’s conversation with President Vladimir Zelenskiy and his repeated mention of the need to investigate former Vice President Joe Biden and his son Hunter, at least so far, the effort has been largely partisan, with most leading Republican politicians remaining quiet and some coming to the president’s defense.

While Professor Bennett felt that pursuit of impeachment over the alleged wrongdoing was not “illegitimate,” a combination of the lack of political expediency and the damage a partisan campaign could do to the integrity of the nation’s constitutional guardrails, he said, make an effort to remove Trump through impeachment “a mistake” in this context. Yet, investigations and congressional action, he felt, were still in order.

“I think it’s appropriate to investigate what the president has done and then for Congress to make a public judgment on those actions; it would let the American people know that what the president did is something they feel is worthy of their condemnation,” said Professor Bennett.

Mr. Healy said that Congress taking the present controversy as an impetus to rein in executive authority, as it did in the wake of the Watergate scandal, might be a “preferable” method of dealing with the matter rather than impeachment, but that the two need not be “mutually exclusive.” He also dismissed the notion that a partisan effort to impeach made the cause illegitimate.

“If you are going to look at the limited history of impeachment for a non-partisan example, you are not going to find one. The impeachments of Andrew Johnson and Bill Clinton were partisan, and while some Republicans voted for the articles of impeachment against Nixon, the majority opposed them,” he said. “It’s definitely preferable to have some in the president’s party support it, and for removal it’s absolutely necessary, but I don’t think that a party-line vote in the House would do any damage to our constitutional fabric.”

Mr. Healy added that even if further evidence to back up the claims alleged by the whistleblower are not conclusively found, he felt that the phone call itself certainly justifies the present inquires.

“What’s in the read-out of the call is something that is within the broad category of abuse of official power, and they are in their rights to open an inquiry of impeachment; whether they should remove in a Senate trial is a different matter,” he said. “I find it hard to imagine a scenario where, if Hillary Clinton was still Secretary of State in 2016, and had, in the course of her duties, asked a foreign government to dig up dirt on a political rival, that Republicans would have heard that and just said, ‘OK, nothing to see here.’”