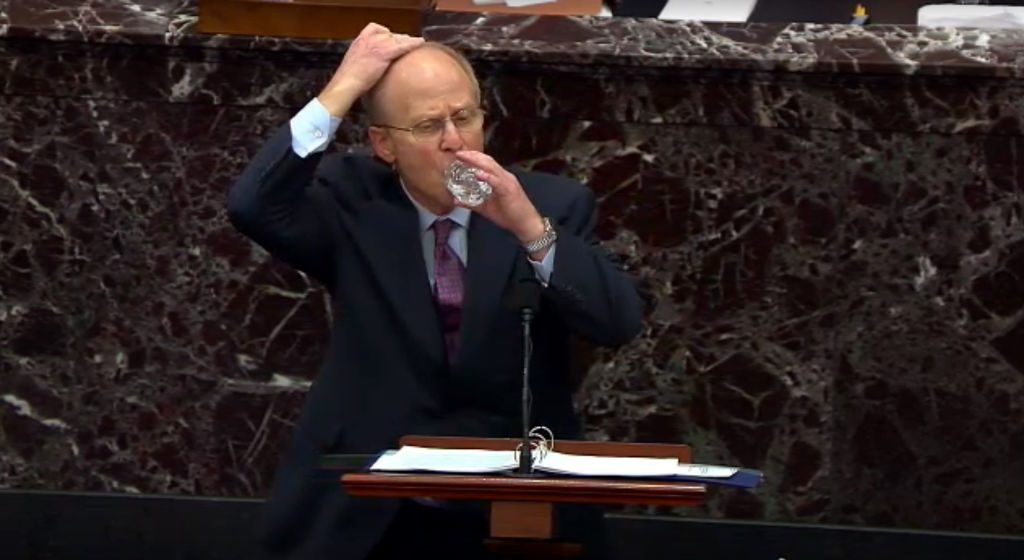 It was a subtle motion that spoke louder than words, proclaiming loud and clear that his religious observance is essential, a core aspect of who he is and what he considers important.

When David Schoen, the lead counsel defending former President Donald Trump in his impeachment trial in the U.S. Senate, extended his arm to cover his head as he took a sip of water during his presentation, the stretch of his hand reached further than he expected. While many were unfamiliar with the practice of making sure one’s head is covered when reciting a brachah before the consumption of food or drink, which caused some to wonder about his hand gesture, Senator Charles Schumer, the Senate Majority Leader, explained it to his colleagues, while people on social media clarified it to those questioning Mr. Schoen’s actions.

Mr. Shoen, an Orthodox Jewish lawyer who lives in Atlanta, Georgia, had declared his fidelity to his faith early on in the impeachment process. After being tapped by Trump to serve as the lead counsel for the proceedings, he informed the Senate that as a shomer Shabbos, he would not be able to attend the trial on Saturday, and requested that the trial not take place on that day. Senator Schumer assured him that they would honor his religious convictions and the trial would adjourn for Shabbos as per his wishes.

As he walked to the Capitol, his head was proudly adorned with his customary yarmulke, which raised the ire of some opponents of former President Trump, who tweeted that he was “wearing his religion on his sleeve.” However, Mr. Schoen’s religion is not worn on his sleeve; it is part of his skin, as it defines who he truly is.

David grew up in Washington, D.C., and lost his father when he was only 4 years old. “I was not religious when I was growing up,” David said as we spoke on the phone one evening. “My mother raised me alone, and I didn’t really have much of a bar mitzvah.”

“I was involved in a case which brought me to New York City, and I stayed in an apartment on the Upper West Side. Little did I know that it served as a sort of dormitory for an Orthodox shul nearby, Congregation Ohab Zedek, and I was invited to a program called ‘Turning Friday Night Into Shabbos,’” David shared with me. “I had little interest in it, and I planned to just give the money and not attend. But in the end, I did come, and it really appealed to me. I became close to Rabbi Alan Schwartz. My wife came from a completely different background. Both her father and grandfather were Orthodox Rabbis.”

Although life in Montgomery was very much to his liking, when his children needed to attend school, the family moved to Atlanta, where the children attended Orthodox schools. The Schoens are members of Congregation Beth Jacob of Atlanta, under the leadership of Rabbi Ilan Feldman, and are active in the thriving Jewish community.

“My work often takes me around the country, and courts throughout the United States do not operate on Shabbos, so attending court on Shabbos has not been an issue in the past. Many places are not familiar with Orthodox Jews and our practices, and at times I do have to leave early on Fridays in order to make it back to my hotel with my gear in time for Shabbos. Yet they generally are respectful, and it has not been a problem,” David told me.

“As far as wearing a yarmulke during court sessions, I feel that I have to deal with the reality that there are people who have stereotypes about Jews, and I do not want to jeopardize my clients as a result. So I leave the decision [if I should wear my yarmulke in court or not] to the client.

“In the early ’90s, I was defending a Jewish client when a juror reported that another juror declared, ‘The Jews bring drugs to our neighborhood, so let’s convict him.’ We were able to have the juror removed, but these issues are present, and I would not want it to be detrimental to the case. Another time, a judge who was a secular Jew mentioned to me that ‘you made the right decision not to wear your yarmulke.’ Even if there may be no prejudice involved, I think that the mere fact that I am dressed differently may be a distraction, and I let the client be the judge as far as my kippah.”

For the Senate impeachment trial, David told former President Trump that he could decide. “He was so gracious, telling me that I should do whatever I preferred. Throughout our interactions, Mr. Trump was forever courteous, and he allowed me to do whatever I wanted in this respect.”

David began the first day without his yarmulke, reasoning that in this high-profile situation he did not want it to be any sort of distraction. “As my presentation went on, my mouth was dry and I needed to take a drink of water,” he recalled. “Of course, my head had to be covered for the brachah, and instead of reaching for my yarmulke, I just covered it with my hand. Perhaps I should have retrieved it from my pocket and put it on, but in the heat of it all I didn’t.

“I do not follow social media, but that evening my relatives mentioned to me that it caused quite a sensation throughout the day. At that point, I decided that it would not make any difference, and I wore my kippah the next day.”

Although there may be some flexibility concerning his yarmulke, when it comes to Shabbos there is no room for compromise. “I explained to Mr. Trump that I would not be able to work on Shabbos. Even if they were to hold the trial without the use of microphones, it is contrary to the very spirit of Shabbos for me to be involved. I explained from the beginning that this just would not happen,” David said with conviction.

Although the Senate assented to his original request that no proceedings take place on Shabbos, Mr. Schoen later penned another letter in which he retracted his original request. “We decided to rearrange the schedule and felt that we could go ahead without my attendance on Shabbos. We expected closing arguments to be on Tuesday, and Mr. Trump really wanted me to deliver that argument. However, things wrapped up quicker than expected, and when it was scheduled for Shabbos, that meant it was just impossible for me. We were faced with a dilemma: Should we delay until after the weekend, or proceed with another counsel delivering the closing argument? I felt that since the lawmakers planned to go home, it was better not to inconvenience them. The decision was made, and ultimately my client was acquitted.

“Over Shabbos, I walked some 14 miles in order to attend shul for davening, but I was able to observe Shabbos as I had planned. I did not concentrate on the trial over Shabbos, and it wasn’t till Shabbos was finished that I was informed that the vote in the Senate was 57-43, which is in the range that we expected.”

With an ongoing discussion about the essential nature of religion winding through the courts, and the Supreme Court’s recent ruling concerning COVID regulations, which declared that religious freedom is essential, Mr. Schoen waxes philosophical about the impact of his public display of the supremacy of religion. “Keeping Shabbos and being a religious Jew goes beyond work. President Trump understood that the inconvenience of the senators cannot override the practice of religion. I am gratified that I was able to convey the message to the nation that religion is paramount to me.”

When asked what message he would give to the younger generation who are studying for their careers or embarking on their professional life in the public arena, Mr. Schoen replied, “In America today, one is able to combine his religious practice with his career. Fulfilling your religious obligations should never be an impediment to advancing in your career. I’ve received emails from attorneys entering law firms and investment houses who have told me that they feel that they have the ability to reconcile their work obligations with their religious performance.

“Although this was not my intention when I accepted the task, I am proud that it turned out this way.”