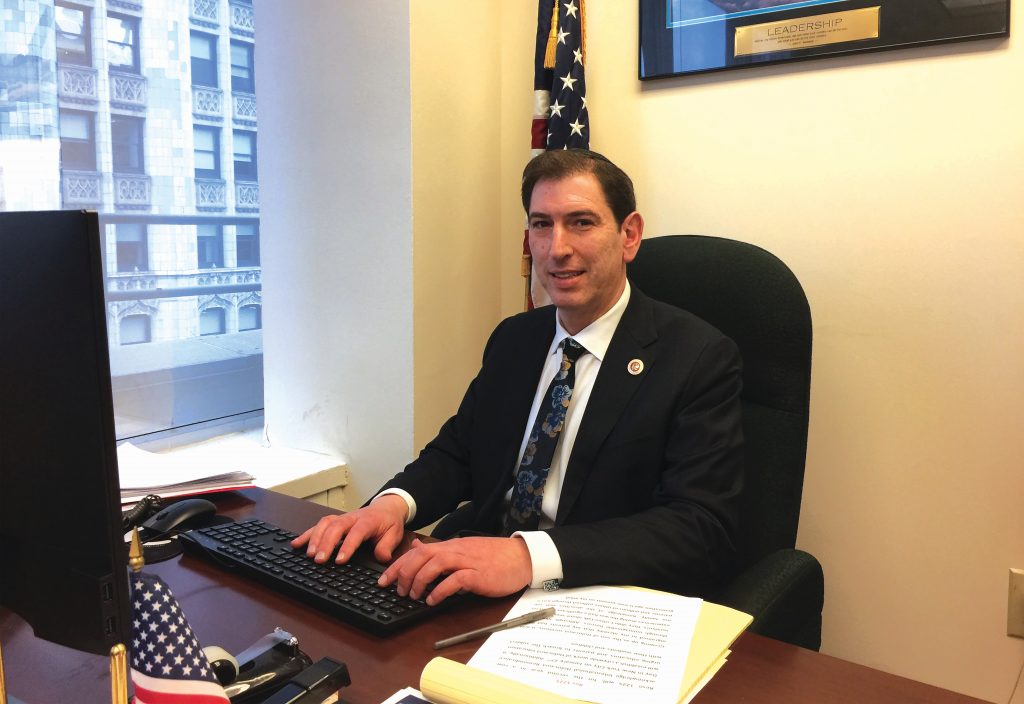 Chaim Deutsch is running for Congress, but he’s determined to fight the scourge of anti-Semitism until his last day in the New York City Council — and beyond.

Deutsch, whose Council term is over at the end of 2021 and who can’t run again for that seat due to term limits, announced last month that he’ll run for Congress this year in New York’s 9th District, where he will be one of five Democrats looking to unseat incumbent Rep. Yvette Clark in the June 23 primary.

Deutsch is running for Congress “for the same reason I ran for the City Council,” he says in an interview with Hamodia, “because I want to help people and fight for the causes that are meaningful to my constituents.”

Whichever office he holds, a significant percentage of his constituents will be Jewish, and few causes are more meaningful to them these days than the fight against a rising tide of anti-Semitism.

“As a son of Holocaust survivors, fighting anti-Semitism and bigotry has been the most important endeavor of my life,” says Deutsch.

During his Council career, Deutsch, who chairs the Council’s 13-member Jewish Caucus, has been vocal about the need for a response to anti-Semitic incidents in New York City, which began to soar in 2018. In 2019, they rose further, reaching a total of 234 complaints across the city (compared with 186 the previous year), accounting for 55% of all hate-crime complaints.

More than 70% of the anti-Semitic incidents were graffiti-type crimes, which most often included the scrawling of a swastika. The assaults have largely been on Orthodox Jews in Brooklyn.

Deustch says that at first, his calls “fell on deaf ears.”

“People said, ‘Oh, it’s not that bad, it’s nothing, we’re not in a crisis,’” recalls Deutsch. “And now, after what happened in Jersey City, and what happened in Monsey, and all these attacks where identifiably Jewish people were being assaulted on the street only because they were Jewish, my bills are starting to get some traction and people are paying attention to it.”

Deutsch, along with Kalman Yeger, the other Orthodox councilmember, pushed for funding for security cameras in the city budget. Mayor de Blasio announced on January 10 that 100 cameras would be placed in Boro Park, Crown Heights and Williamsburg, the three Jewish neighborhoods most affected by anti-Semitic attacks. Deutsch is also working on other bills to expand the installation of cameras near houses of worship, parks, and private and public schools.

In Brooklyn, there were 49 arrests last year for anti-Semitic crimes. But all too often, the public forgets about a case as soon as an arrest is made. And many of the hate-crime perpetrators are juveniles; information about the disposition of their cases is not released to the media.

In an effort to shine a light on the prosecution and outcome of hate-crime cases, Deutsch drafted a bill that would require New York City’s district attorneys to report on the disposition of all hate-crime arrests: Was the arrestee ultimately prosecuted for a hate crime, were they convicted or did they plea, were they sentenced, etc.

“When you see young adults committing hate crimes,” says Deutsch, “I also want to know what schools they come from. Like, if we see five [perpetrators] come from one school, we know that we need to do education in that school. So it’s important to us to have as much information as possible. This way we know, as elected officials, what resources we need to put back in to the community.

“And the education part is extremely important,” says Deutsch, who has brought Holocaust survivors to speak with public-school children. “It has really made an impact on the kids.”

As part of his education campaign, Deutsch is seeking to have sensitivity training offered as an alternative to criminal punishment for minors who commit property hate crimes like the drawing of a swastika.

“I think it would be helpful to educate that individual on the impact of what they did,” says Deutsch. “If it’s a swastika that was scrawled, that person should understand what that means to a Holocaust survivor, what that means to a Jewish community as a whole — and that person, once they go through a sensitivity training, you hope that through education, they won’t do this again.”

Many state and city legislators have expressed alarm over New York’s recently passed bail reform, which went into effect at the beginning of this year and eliminates the possibility of cash bail for nearly all misdemeanors and non-violent felonies. Criminal suspects, including those accused of hate crimes, have been let out of detention shortly after their arrest without putting any money down for bail, and in some cases have promptly re-offended.

Deutsch has been an outspoken opponent of the bail reform and is advocating for state lawmakers and Gov. Andrew Cuomo to reverse parts of it.

“We need to give discretion to the judges to hold these people who are accused accountable and not to let them out when someone is a public threat,” says Deutsch.

Deutsch believes that reinstating bail would discourage repeat offenders, and not merely by keeping them locked up.

“When someone posts bail, they just made a personal investment into the court system, which would give them more incentive to come back to court and less incentive to be a repeat offender,” says the Councilman.

A number of those accused of committing hate crimes have suffered from mental illness, and Deutsch is critical of how the city has dealt with this issue.

He says ThriveNYC, the city’s mental health initiative founded by First Lady Chirlane McCray, has not properly publicized its services.

“ThriveNYC needs to go into communities and let them know that yes, we exist, we have mental health resources,” says Deutsch, who believes some hate-crime incidents could have been avoided had the perpetrators received mental health assistance before they committed crimes. “People don’t know who ThriveNYC is; people don’t know that if they know someone who has a mental illness, they could call (888) NYC-WELL. If you’re spending $250 million a year, $1 billion over four years, I think all 8.6 million New Yorkers should know that this thing exists.”

In response to Hamodia’s request for comment, Joshua Goodman, a spokesman for ThriveNYC, said, “NYC WELL has responded to over 700,000 calls, texts, and chats, providing free, confidential mental health support regardless of insurance or immigration status. Susan Herman, Director of the Mayor’s Office of ThriveNYC, has met with Councilmember Deutsch several times, recently getting his feedback on a new engagement strategy, and we appreciate his support in bringing mental health care to New Yorkers in need.”

Deutsch has also criticized Cuomo for what he says was a politically motivated rollout of security funding.

In the state budget passed last year, a program championed by Assemblyman Simcha Eichenstein expanded security funding for cultural centers, including yeshivos and camps, to $45 million.

Cuomo announced rollout of the funding at a solidarity march in January, following a Chanukah attack in Monsey that injured six Jewish men, one critically.

Deutsch argues that the governor could have opened applications for the funding soon after the legislature passed it in April, so that the money could have already been available for camps in the summer of 2020.

“But he waited [until] it was the right time for him,” says Deutsch. “I think that, considering everything that’s going on here in our city and around our city, he should have announced [the rollout] right away so that [camps could have applied] for that funding for this summer.”

Eichenstein has also been critical of the governor, saying that he has repeatedly reannounced the same funding so as to take credit for the same money again and again. Following Cuomo’s announcement of the $45 million last month, the Assemblyman tweeted, “Fool me once… @NYGovCuomo announced this same funding over and over as if it’s new. This is the same $45 million that we passed in the budget last year. We need additional security funding for schools and houses of worship.”

When I ask Deutsch if Cuomo has been delaying announcements or re-announcing the same money for political purposes, the Councilman replies, “Well, that’s what a politician does.”

Cuomo’s office did not reply to Hamodia’s request for a response to Deutsch’s and Eichenstein’s comments.

Some of Deutsch’s efforts have already borne fruit.

The NYPD posts CompStat reports each week of the seven major index crimes; there is a public release and press conference to discuss these statistics every month. Last September, Deutsch drafted a bill requiring the NYPD to list hate crimes in its CompStat reporting. Deutsch met with the NYPD soon thereafter to discuss the issue. And — although the bill has not yet passed — at the monthly press conference in January, Police Commissioner Dermot Shea announced that the Department will soon begin incorporating hate crimes into the CompStat reports.

Some Jews have expressed a desire to arm themselves following recent attacks. Though obtaining guns is easier in upstate areas like Monsey, New York City has strict licensing regulations. Deutsch is drafting a bill that would make protecting a house of worship an additional legitimate reason for the city to grant an applicant a firearm license.

He is also drafting a bill to require that every one of the NYPD’s 77 precincts has a “house of worship officer.” The officer would be responsible to make a detailed list of houses of worship and other vulnerable areas in the precinct, reach out to these institutions and make plans for protecting them.

Finally, a bill currently in committee would lower the minimum-student threshold required for private schools to receive city reimbursements for hiring security guards; currently, only schools with at least 300 students qualify.

Though New York is a heavily Democratic city, the political views of many Orthodox Jews are more closely aligned with the Republicans. As he gears up for his Congressional run, Deutsch, a self-described “conservative Democrat,” is asking constituents who are registered in other parties to switch their registration to Democrat, noting that most races here are won or lost in the Democratic primary. There is currently no declared Republican in the race for the 9th Congressional district.

“If you aren’t registered to vote as a Democrat, you can’t vote in Democratic primaries, which means you are losing the opportunity to have a voice in who represents you locally,” says Deutsch. “Our community is large and we have the ability to make positive change and elect people who will truly represent our interests — but only if we vote in Democratic primaries.”

Party registration can be switched at voterreg.dmv.ny.gov/MotorVoter. For those wishing to vote in the 2020 primaries, the deadline for switching parties is February 14.

The Councilman who is seeking to become the Congressman says he’ll be taking the same battles he has fought in City Hall to Capitol Hill.

“I am running for Congress because I believe it’s time for our community to have a seat at the table,” says Deutsch. “In this climate, there are so many critical challenges facing us — anti-Semitism is on the rise, property taxes are making Brooklyn unaffordable, criminal justice reform has made our streets less safe, there is a mental health crisis that is not being addressed, and so many other issues affect us that need the right leadership. I’ve devoted my life to fighting for our community, and I intend to continue that in the U.S. House of Representatives.”