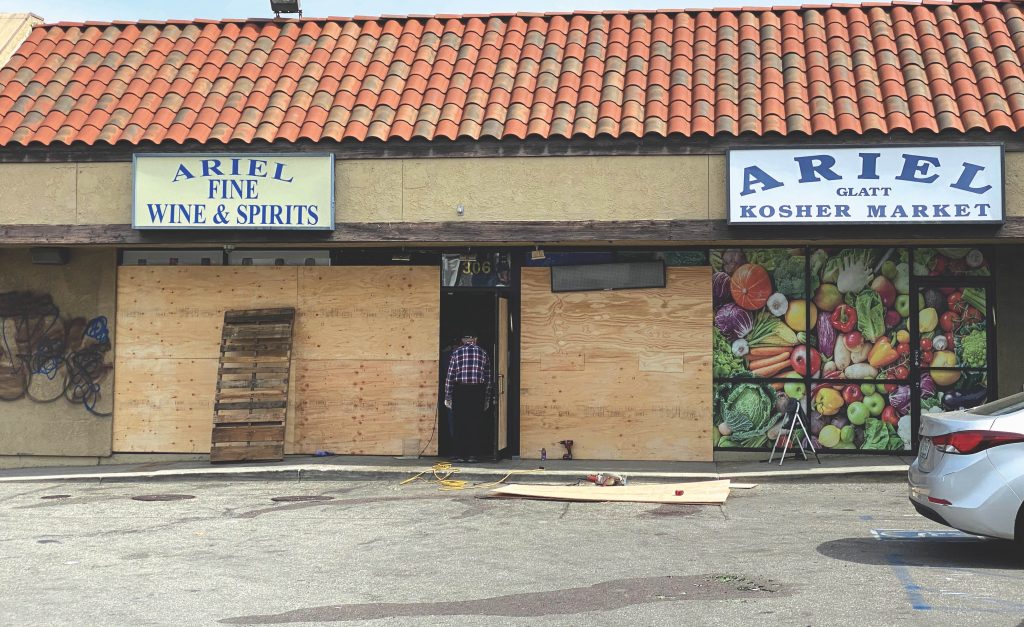 As rioting rocked cities around the nation in response to the death of George Floyd, the heart of Los Angeles’ Orthodox community found itself in the crosshairs of an explosion of looting and vandalism beginning on the second day of Shavuos, which fell on Shabbos, and raging until the early morning hours of the next day.

While no members of the community suffered injuries, a huge swath of businesses were broken into and robbed, and many buildings including shuls, schools, and other community institutions were sprayed with graffiti — some of an anti-Semitic nature.

Aryeh Rosenfeld, who owns a clothing store as well as another establishment that sells paper goods, just after Yom Tov was warned by a neighbor that his shop had been broken into. He went there to find his store’s windows broken and four thieves making off with his businesses’ computer and bags of merchandise.

“I chased them down and got them to give back the computer,” said Mr. Rosenfeld. “There were vans and cars driving around looking for broken windows, and when they saw one, they got out and took what they could from the store. Now we’re basically just cleaning up, but a lot of Jewish stores got clobbered — bakeries, a drug store, all kinds of businesses.”

Mr. Rosenfeld said he observed that while the Fairfax area, where looting took place, had a large police presence during the rioting, very little was being done for most of the night to stop the lawlessness. Looking to protect their businesses, he and a group of fellow retailers banded together to confront vandals and save whatever goods they could.

“Most of them aren’t looking for a fight, and if you yell at them or stand outside your store, they’ll go away. Only one guy who was carrying a pole and a bag of stolen goods didn’t listen, so we chased him down and tackled him to get it back,” he said. “The police weren’t doing anything to protect us, but when we saw them, they seemed to appreciate there were some people out that weren’t angry at them and were just trying to protect themselves.”

Community activists have established an online fundraising campaign to aid the many businesses that have been affected, many of which were just hoping to begin the recovery process after months of COVID lockdown. A day after the riots subsided, it has already raised over $10,000.

In addition to widespread looting, many of the area’s shuls and Jewish institutions were hit with graffiti. One historic shul, Congregation Beth Israel, was defaced after police snipers positioned themselves on the roof. Mr. Rosenfeld said he heard protesters accusing “Jews” of having given the institution’s keys to the authorities as a pretense for the vandalism that followed.

Dr. Irving Lebovics, who serves as chairman of the Agudath Israel of America’s California division, said that while Jewish issues are not at the heart of the protests, it seemed clear to him that the community had been targeted by organizers.

“I think it is pretty obvious that there were agitators here with an agenda that goes beyond police brutality,” he said. “Black Lives Matter and Antifa are groups with a history of anti-Semitism and virulent anti-Israel positions. Spraying ‘Free Palestine’ or obscenities about Israel on a shul doesn’t have anything to do with what happened in Minnesota.”

While nearly every Jewish school and shul was graffitied, Dr. Lebovics noted that no public schools or other houses of worship were hit and that Jewish-owned businesses were looted while others next to them remained untouched.

Mr. Malkiel Gradon, local coordinator for Misaskim, felt that while the spillover of violence disproportionately affected Jews, it was not primarily anti-Semitic.

“Some of the things they said or wrote were anti-Semitic, but the stores they broke into was just because they had what they were looking for. They went into the kosher grocery because they saw signs that they had a big selection of alcohol, so they went in and took it. They broke into the pharmacy and took tens of thousands of dollars’ worth of narcotics,” he said.

Mr. Gradon added that while many Jews had to scramble to protect their businesses, few felt any physical threat and he knew of no private homes that were targeted.

Joey Brecher, who witnessed much of the rioting, conjectured that Jewish stores had been disproportionally attacked due not only to their proximity to a mass protest, but also because of owners’ inability to protect them over Yom Tov.

“Once they heard what was going on, a lot of non-Jewish store owners came out and boarded up their windows, so the Jewish stores were the ones left as targets,” he said.

On Thursday, before the onset of Yom Tov, Jewish community liaisons had been alerted to a protest planned for Shabbos afternoon in nearby Pan Pacific Park. Several shuls and other community groups warned people to avoid the area, knowing that such gatherings had already turned violent in other cities.

By midmorning, huge streams of people descended on the park, conducting what was a mostly peaceful protest until midafternoon, when groups of attendees began attacking police officers, pelting them with water, glass bottles and other projectiles, and burning vehicles. Police stationed at the scene called for reinforcements, but when they arrived, the violence only got worse, giving way to looting and vandalism.

According to eyewitnesses, little was done to stop the violence until around 2 a.m., when heavily armed police began making mass arrests, packing rioters into city buses.

Mr. Brecher said that he did not feel the area had been targeted due to its Jewishness, but rather because it is viewed as an upper income area. The hypothesis would seem to fit with Antifa and other left-wing groups, who have led protests marked by slogans like “Eat the rich.”

Mr. Rosenfeld posited that the violence was largely the work of local left-wing activists, saying that Antifa and other agitators were responsible for most property destruction and graffiti, with black people who attended protests largely involved in robbing merchandise after store windows had been broken.

A day later, on Sunday morning, city officials had sent large teams to remove the large amount of graffiti, burnt cars and other signs of the rioting.

“On the one hand, it’s shocking what happened here, but at the same time, when you allow thousands of people to protest in an area that has nothing to do with what they’re protesting about and there are nice stores nearby, this is exactly what’s going to happen,” said Mr. Gradon.

The anti-Semitic acts of rioters in Fairfax were noted by several observers, including Los Angeles City Council Paul Koretz, who in a statement called it “vicious and criminal” and called out the media for ignoring the targeting of Jewish establishments.

“Under the guise of protest, some advanced their anti-Semitic agenda,” he said.

Dr. Lebovics said that organizer’s choice of Pan Pacific Park, which put the protest in close proximity to Los Angeles’ largest and most conspicuous Jewish neighborhood, was not a coincidence and betrayed an ulterior motive.

“We are not claiming that the purpose of these demonstrations or even the violence they have ended in is anti-Semitic, but there is no question that what went on here had clear anti-Semitic overtones ,and the fact that they decided to plan their protest and carry on their rioting in LA’s most historic Jewish neighborhood was not lost on us.”