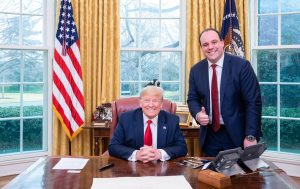 Six weeks after the election, President Trump is still fighting to the finish. The President is not alone in his fight, and his legal team is as tenacious as he is. Among them is Boris Epshteyn, Strategic Advisor on the Trump-Pence 2020 campaign and a member of the Trump Legal Team. Mr. Epshteyn previously served as a Senior Advisor on the President’s 2016 campaign and as Special Assistant to President Trump and Assistant Communications Director at the White House.

In an interview with Hamodia, Mr. Epshteyn describes the legal goals and machinations behind the Trump legal team’s challenge for election integrity. And he agrees with President Trump, who declared after the Supreme Court rejected the Texas lawsuit, that, “It’s not over. We’re going to continue to go forward.”

Can you describe your involvement with the Trump team?

I have been Strategic Advisor with the Trump 2020 campaign throughout the campaign, making sure that President Trump’s and Vice President Pence’s message reached as many folks of different constituencies as possible all across the country. I’m currently working on the legal team under the leadership of Mayor Giuliani and the ultimate leadership of President Trump. We’re focused on making sure every legal vote is counted across the country.

I’m also co-chair of Jewish Voices for Trump and leading the outreach to the Jewish community, which I’m very proud of. We did very strongly with the Jewish people all across the country. The President got 30% support of the Jewish vote, which is a 5% increase from 2016. In Florida, for example, President Trump received 42-43% support, up from 30% in 2016.

Did the large percent of the Orthodox Jewish vote boost the overall Jewish vote?

We’re very proud of the support that the Orthodox community has continued to show President Trump. They came out in big numbers for the President all across the country. But we also received a lot of support from other parts of the Jewish community. The Israeli community was a key group that supported the President in big numbers, as well as Reform, Conservative and secular Jews.

Absolutely not. The Supreme Court, on procedural ground, said Texas didn’t have the standing. It didn’t address the merits of the lawsuit at all. Nothing has been adjudicated. This doesn’t prevent further cases on this to go up to the Supreme Court.

There’s a lawsuit continuing in Georgia. In Pennsylvania, Congressman Mike Kelly’s lawsuit has been filed for certiorari [order of a higher court to review a decision of a lower court] with the Supreme Court. There was a hearing in the Wisconsin Supreme Court over the 220,000 ballots that were illegally cast, which we know took place based on the recount. And in Arizona, GOP Chief Kelli Ward’s lawsuit has also filed for a writ of certiorari. So, the battle on the legal and legislative front absolutely continues.

The Supreme Court only rules on what’s in front of it. On this specific lawsuit they believed Texas didn’t have standing. That’s all they said. They didn’t talk about the fraud; they didn’t have a hearing. A lot of the mainstream media is assigning more weight to this decision than there is. It was only a procedural decision by the court. And we move forward. We continue to assess other legal options as well. Mayor Giuliani laid out the possibility of filing suits in federal district court that have similar claims as the one that was laid out in the Texas case.

Do you think the Supreme Court’s rejection of the Texas lawsuit might affect the Senate races in Georgia by disillusioning some Republicans, many of whom are disappointed with all the legal setbacks?

No. I completely disagree with that narrative. The work on the state level continues, including in Georgia, where there’s a lawsuit that laid out over 400,000 ballots that were allegedly illegally cast in the state of Georgia. I think that the Republicans in Georgia are energized that we’re fighting for election integrity. This is a fight to ensure that every legal vote is counted. And both Republicans and Democrats should be on board with that.

The amount of outpouring support for election integrity is overwhelming — I see it from the responses, from the news shows that I’m on, from social media. My Twitter following has literally doubled since I’ve been a part of this legal team. So, I think it will actually help Republicans Loeffler and Purdue. 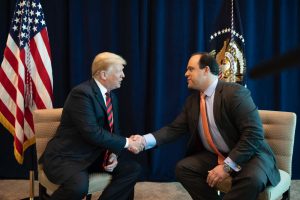 Before the election, President Trump predicted election fraud accompanying mail-in ballots. The Supreme Court, with Chief Justice John Roberts siding with the liberals, declined in October to block a Pennsylvania state court ruling allowing mail-in ballots to be counted even if they arrive three days after Election Day. Could some of the alleged fraud have been avoided if the Supreme Court had ruled otherwise?

It could have been avoided by the State Legislatures doing the right thing, ensuring that their laws and rules were followed in limiting mail-in ballots and ensuring that the mail-in ballots which are used are actually observed and inspected. Pennsylvania alone had up to several hundred thousand votes in just Philadelphia and Allegheny County that were processed without meaningful observation. We all know what happened in Georgia where the video showed ballots being pulled out of suitcases in the middle of the night.

These are real issues with our voting process. The President pointed to the dangers of mail-in ballots. Even The New York Times has written before how mail-in balloting is linked with fraud. That’s what we’re seeing.

Time is of the essence with the Electoral College casting their votes. How do these dates play out in terms of Trump’s legal fight?

The December 14 date plays out the same as the so-called December 8 deadline played out. It came and it went. There’s a date on December 23 in federal law by when the votes are supposed to be in Congress, but there’s no penalty for that. The first substantive date is truly January 6. That’s the date when Congress is supposed to have their vote.

A Rasmussen Reports survey released last week found that 47% of likely voters believe that it was “very” or “somewhat” likely that “Democrats stole votes or destroyed pro-Trump ballots in several states to ensure that Biden would win.” With continued legal setbacks, do you think some Trump supporters are reaching election fatigue and resigning themselves to a Biden victory or is there a strong will to keep fighting?

I think the American people want to know that the voting system is full of integrity and done fairly and by the law. Everything I know from people all over the country who are out there who are being very vocal, going to rallies and meetings, and on social media shows they are absolutely behind President Trump’s effort to count every legal vote.

This is about the integrity of our election system. It’s about getting to the bottom of who won the most legal votes in these key states and the most electors based on those legal votes. If that’s determined to be Joe Biden, then so be it. But the wide array of voter irregularity and voter fraud all over the country is absolutely staggering.

How do you explain the constant refrain of “There’s no evidence of widespread fraud,” from the media, big tech, and even some Republicans, despite the more than a thousand sworn affidavits to the contrary?

It seems that for the media any fraud from the Democrats appears to be OK. Look at how the media treated the Hunter Biden story. The story was clamped down completely. The New York Post had its Twitter account suspended for talking about Hunter Biden and his alleged illegal activities around the world, and now we know he was under investigation since 2018.

CNN and Politico are covering it only now. Before, they called it “Russian disinformation” or other nonsense. We know that most of the media is corrupt in this country. The good thing is that the American people know that also. That’s why the trust in the media is so very low.

Do you agree with the claim that the media suppressed and denied the Hunter Biden story with the intention of misleading the public, and this constitutes election fraud?

Absolutely. That’s a contribution to the Biden campaign by most of the mainstream media. They suppressed a story which now has real legs to it and we knew this before the election. Everything that the whistleblower Anthony Bobulinski, Hunter Biden’s ex-business partner, was talking about is turning out to be true. But the media is only giving it credence now because they think that Joe Biden is locked in to be inaugurated on January 20th. But that is not the case. The election litigation continues and there’s work to be done to ensure every legal vote is counted in this country.

Unlike long-standing accusations of Democratic election fraud in inner cities, there haven’t been any allegations of Republican fraud. Can you comment on this disparity?

The Democrats have been controlling our inner cities for way too long, going back to the 1800s in many cases, and they’ve been perpetrating voter fraud on the American people. We are fighting against it now, calling them to account and exposing all the fraud. By exposing it we hope to stop it.

If you ask an overwhelming majority of rational Americans whether Democrats have been perpetrating voter fraud in this country, of course they will say yes. They’ll look back to 1960 in Chicago and Texas, to Philadelphia, Detroit, Baltimore, Atlanta, and Milwaukee. It’s common knowledge that Democrats cheat in elections. Unfortunately, it’s become accepted common knowledge. No longer. Now is when President Trump and his team are standing up against voter fraud and for election integrity.

I think Joe Biden should be joining these lawsuits and efforts because if he actually believes that he legitimately got 80 million votes, then he should want to get to the bottom of it and make it clear that he did win fair and square. But you don’t see the Democrats jumping in on it because they know that election fraud has been perpetrated.

In the scenario that the ongoing state lawsuits don’t succeed, how would you advise the 74 million Americans who voted for Trump to redirect their energy?

I’m not going to speculate on if it doesn’t succeed. We continue to be focused on counting every legal vote and ensuring that electors are based on counting all the legal votes. The huge number of President Trump supporters, which is about 12 million more than in 2016, should continue supporting the President, the MAGA movement, and the America First agenda of putting this country first. We need to ensure that our elections today and into the future are done with integrity and within the law. We cannot allow the Democrats to cheat in our elections any longer. We need to scream from the mountaintop about how free and fair elections are the very soul of this country.