Prime A Race Against the Clock 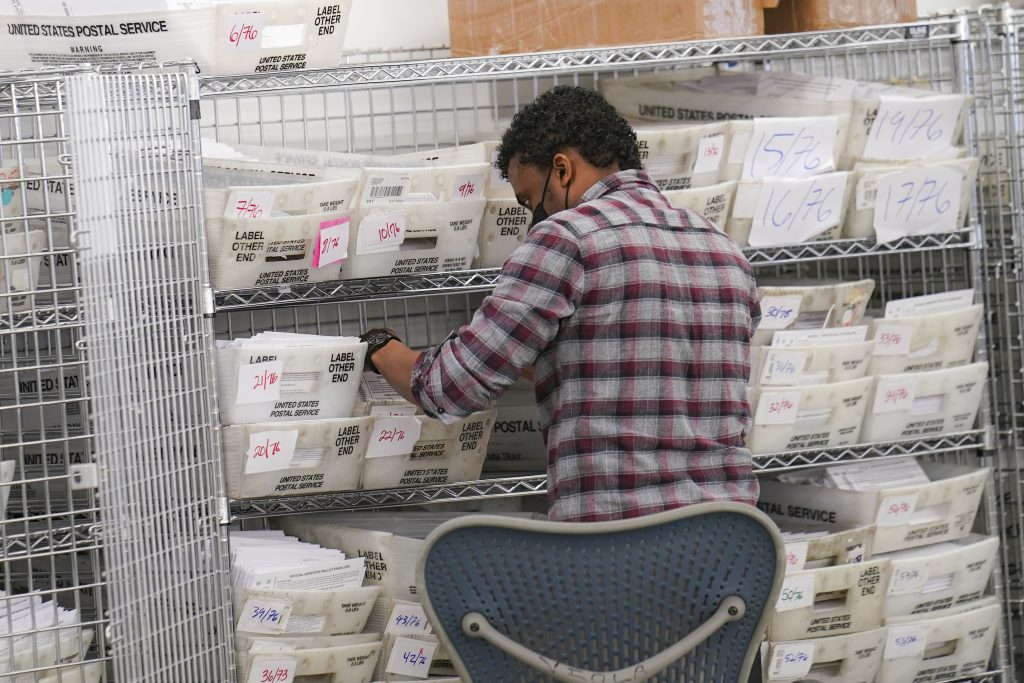 With the Electoral College set to meet on Monday to select the 46th president of the United States, President Donald Trump and his team continue to advance and argue claims that the election was stolen from them in acts of mass fraud. While claims have not made headway in courts, a set of incidents, apparent anomalies and eyewitness reports of vote tampering have gained wide attention in pro-Trump circles. At the same time, they have gained relatively little attention in mainstream media and even some Republican political circles.

Hamodia spoke with GOP political consultant Saul Anuzis, former chairman of Michigan’s Republican Party, to discuss some of these issues.

The interview has been edited for brevity and clarity.

What is your general assessment of the veracity of the fraud accusations that have cropped up in contentious elections states?

There are some very real questions that have been raised regarding this election, such as accusations of improprieties and some statistical anomalies. In some cases, there are procedures that it seems were not properly followed. In others, laws were bent to deal with the high volume of mail-in ballots, and some of these matters are backed up by affidavits taken under oath. The sum total clearly raises the potential for a real issue of fraud.

Which specific instances do you feel raise the most serious questions?

There were cases where observers or poll challengers were not allowed to be present at vote counting. There was a case in Detroit where the windows of the counting area were covered with cardboard so no one could see inside. There are affidavits claiming that mail-in ballots were back-dated, and at least two postal workers who say that they saw ballots coming in with no signatures and that they were filled in later.

It seems there was a minor incidence of voting by dead people and people who had moved out of state as well.

One of the more egregious instances was a video that showed someone passing a USB drive in the voting center. Now, there could be a legitimate rationale for it, but it certainly looks like it was being done clandestinely. There are cases where it looked like piles of ballots were run a second time. We saw cases of late-night data dumps where a county was leaning towards Trump, and then suddenly a huge return came in which was 90% for Biden. There were reports of trucks arriving in the middle of the night with ballots where it seems the chain of custody was not clear.

Some of the statistical questions come from bellwether Democratic districts, where Biden got much higher turnout than Obama. It’s possible, but it seems strange that a candidate whose major appeal was not being Donald Trump would do so much better than a candidate who brought out tremendous enthusiasm in the Democratic base.

All that looks fishy, and while none of it is proof that the election was tampered with, if you add up all those issues it is at least enough to say that we should take a better look and make sure there wasn’t large-scale fraud going on.

Given the picture that you present, why do you think the Trump campaign’s legal challenges have gained no real traction so far?

The reason this hasn’t gotten traction in courts is because something looking bad doesn’t mean it’s illegal. The Trump lawyers are mostly going to court trying to hold up an election from being certified. To do that, you need to pass a very high bar. Now, these stories arouse a great deal of suspicion, but the challenge the Trump campaign has faced is that they have not been able to prove that fraud actually occurred, and that is what you would need for the courts to step in here.

Courts can’t rule based on things looking fishy, but just because they can’t meet the bar required to stop the certification doesn’t mean there is nothing here that doesn’t warrant a closer look.

Whatever there is to prove will likely not be proven until after the Electoral College votes, which is set to happen on December 14. The Constitution and state laws give very strict guidelines for what must go on in choosing the next president, and unless the Trump team comes up with something very damning in the next few days, I think that it is nearly certain that the Electoral College will meet and select Joe Biden.

If the arguments being advanced by the Trump team cannot pass the bar of legal intervention, what type of response from government do you feel is warranted?

I think there should be investigations into what went on here. One piece of that should come from state legislatures, since for the most part states set the laws for how elections are conducted. And since this was a federal election, I think it would be prudent to appoint a special counsel that can look into what occurred and make recommendations to Congress.

What would clear up a lot of what occurred would be if states where a lot of these accusations cropped up would conduct forensic audits. If every vote would be matched up to an actual verified living resident in the state, that would either prove or disprove a lot of the suspicions of fraud. It’s expensive and it’s a pain in the neck, but if we’re talking about choosing the next president and we’ve seen enough reason for legitimate concern, then for the sake of making sure people feel comfortable that an honest and fair election took place, we should verify what happened.

It’s also important that if in any of these instances cheating did indeed occur, those responsible should be prosecuted. If there are no consequences for election tampering, this is something that could very well repeat itself.

Do you think it is reasonable to argue that even if fully investigated, any of these irregularities would change the result of the election, even in any individual state?

If there was actually some software manipulation, or a large set of ballots handed in through a USB or something of that nature, it could be technically possible. If you look back a few elections ago, Wisconsin got caught with 12,000 ballots being sold. Any time you have races with less than a 20,000-vote margin it would not be very hard to manipulate the result. That’s why a forensic audit would be of so much value here.

How do you feel about accusations from the President and some of his supporters that this is a “stolen” election?

I would not say it was stolen. There seems to be potential that mass fraud took place, but that has not been proven yet. Statistical anomalies do not equate to fraud, and unless fraud can be proven, that’s a nuance I would be careful of. What makes sense is to hold hearings and to get a special prosecutor and give people the confidence that this was done correctly.

Given your statements that these fraud accusations are as yet unproven, and the high stakes of confidence in electoral integrity, do you feel the President’s insistence that the election was “stolen” is what is best for the country at this point?

The President is frustrated, and he feels that it has been stolen from him. The best way to answer that is to prove him wrong, but that has not been done yet. The states in question here are taking an approach that unless the Trump team can bring conclusive proof of fraud, nothing more needs to be done. Making that the bar is going to leave a lot of people questioning the results of this election.

Do you feel the mainstream media are purposely burying stories of voter fraud?

Absolutely. The media is looking away from these stories for the simple reason that they prefer Biden to be the next president, so they would rather not look into much beyond that. They are not necessarily doing anything dishonest, but they love being able to say, “Well, there’s no proof, so let’s not look at this.”

But you do have instances which you would think should attract the media’s attention, like the video that came out about what happened in Georgia where it looked like a new bunch of ballots just showed up. It was enough to get the Governor to agree to check all the signatures on the ballots.

There are hundreds and maybe thousands of affidavits sworn on pain of perjury and some very curious statistical anomalies. There are clearly issues that should be brought to the public’s attention, but the liberal media is showing its bias and settling for saying that there’s no conclusive proof.

How much of these problems do you feel are related to the high volume of mail-in ballots?

It was definitely a big part of the problem for the simple reason that it had never been done before on this scale. What ended up happening was that because of the pandemic, a lot of Democratic states mailed ballots directly to voters. There was no real system in place to verify that the people they were mailing them to were alive or still living at those addresses, which opens itself up to a lot of problems. Even if they would have mailed an application for a ballot, that would have rooted out a lot of these issues. There was nothing in place to make up for the fact that you were moving from a system where you have to show real ID to a real person to a system where you are just filling out a paper, signing it and sending it back.

In the past, 30-40%of absentee ballots were denied because they were not filled out properly. In Wisconsin, since there were so many of them because of COVID, clerks were told they could make fixes on them if they were done incorrectly, which is basically a recipe for fraud.

Mail-in voting is not a bad thing necessarily, but you need very clear-cut procedures as to how it should be done, which was lacking in a lot of cases here.

Do you think legislatures should take this as an opportunity to make general fixes to shore up electoral procedures?

We need a lot more transparency in how ballots are dealt with. Early voting must have a hard cutoff on Election Day and the votes that come in before then should be tallied right away. The results should not be given out, but if the count starts early, the data will be ready and there will be fewer post-Election Day surprises.

Any closing thoughts on the matter?

What’s unique about the United States is that we believe that we have fair elections, and as such we feel that people in power have been duly chosen to represent us. That works because people have faith in the system. I would say that we have had several mini revolutions in my lifetime, but they have all been at the ballot box. That goes for when Reagan won 49 states or the frustrations that were expressed with Bernie Sanders’s popularity or Trump’s victory. If people stop feeling that elections are fair and honest, we have to worry about them finding other ways to express those frustrations, and vigilantism is the last thing that we need here.