A DANGEROUS GAME: China Ups Its Threats to Taiwan 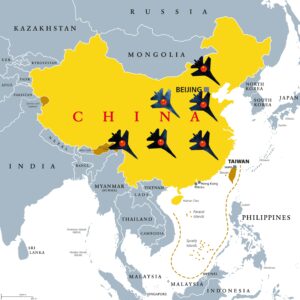 The latest chapter in the tumultuous relationship between the United States and China focused largely on mounting threats to the de facto independence of Taiwan.

In recent weeks, Chinese military aircraft have entered Taiwan’s air defense zone on a nearly daily basis with likely over 150 incursions. On several occasions, Taiwanese patrols scrambled to chase the Chinese planes out of its airspace, and all incidents have ended without exchange of fire. Yet, the exercise drains Taiwan’s military capabilities and sends a message that not only does China not accept the island’s status, it might be willing to take action to reclaim it — soon.

Chinese aggression is not limited to air incursions. A few weeks ago, China’s military conducted large scale amphibious landing exercises on its side of the Taiwan Straits — a not-too-subtle message.

Two weeks ago, reports surfaced that in the late summer China had successfully tested a nuclear-capable hypersonic missile — presumably an attempt to up the ante of its deterrence against American intervention on Taiwan’s behalf or into any of China’s affairs.

Taiwan’s history and status has been a complicated matter for over half a century.

After communist forces led by Mao Zedong consolidated their hold on the Chinese mainland in 1949, soldiers and members of the Chinese Nationalist Party led by Chiang Kai-shek retreated to the island. There, they established the Republic of China, claiming to be the nation’s legitimate government.

Through a series of ups and downs in their attitudes towards each other, Taiwan has remained independent in fact, while never claiming that status in any official form. The island was led by authoritarian rule for decades, but in the 1980s transformed into a democracy and has become a successful financial and industrial center.

Yet, more than 70 years after the retreat of the nationalist forces, Communist China has never relinquished its claims on Taiwan and rhetoric of its hopes for “reunification,” sometimes presented as “liberation,” have become increasingly frequent as Chinese leader Xi Jinping’s government becomes ever more aggressive in its pursuit of increased world power.

America’s relationship with Taiwan is somewhat of a paradox.

As the U.S. refused to recognize Communist control of China for decades, Taiwan’s capital of Taipei was treated diplomatically as the legitimate government for all China.

President Richard Nixon’s 1972 visit to China began a thawing and normalization of relations between the two powers. In 1979, moved largely by a desire to further distance China from the Soviet Union’s influence, the U.S. switched its recognition to Beijing and formally ended diplomatic relations with Taiwan’s government, known as the Republic of China. In doing so, the U.S. signed on to the “one China policy,” a deliberately ambiguous position which both China and Taiwan can interpret as favoring their respective positions.

Since then, U.S.-Taiwan relations have been governed by the Taiwan Relations Act (TRA) which allowed economic and other interactions with the people of Taiwan while conducting diplomatic business through a state-funded non-government organization. The act also gives a vague U.S. commitment to defend Taiwan from invasion by China. The clause has been interpreted to refer to funding for Taiwan’s defense budget and does not say explicitly that the U.S. would send troops in the event of invasion, but some interpreted it that way.

America continued to have regular contact with Taiwanese officials and has sent billions in defense funding to the island’s government, but state visits or even on-the-record phone calls remain rare and controversial.

The Biden administration has pushed back against China’s actions and sharp rhetoric. This past August, President Joseph Biden approved a $750 million arms funding package for Taiwan, consistent with higher defense funding that the Trump administration began.

Still, in the diplomatic minefield that Taiwan presents, each side’s words can carry great weight. Earlier this week, when the President responded in the affirmative when asked if the U.S. would defend Taiwan if invaded, China shot back quickly.

“When it comes to issues related to China’s sovereignty and territorial integrity and other core interests, there is no room for China to compromise or make concessions, and no one should underestimate the strong determination, firm will and strong ability of the Chinese people to defend national sovereignty and territorial integrity,” Chinese Foreign Ministry spokesperson Wang Wenbin told The Associated Press.

White House spokeswoman Jen Psaki quickly clarified that all the President meant was that the U.S. remained “guided by the Taiwan Relations Act.”

Given the sensitivity of the issue, especially amid deteriorating relations between Washington and Beijing, more than one observer has voiced concern that a small misstep on Taiwan could be the match to ignite armed conflict between the two superpowers.

To gain more insight into China’s threats to Taiwan and the U.S.’ role, Hamodia spoke to Dr. Timothy R. Heath, Senior International Defense Researcher for the RAND Corporation, an expert in China affairs.

What moved China to begin its more aggressive stance toward Taiwan now?

China does not seem poised for imminent invasion. As such, what is the goal of its present strategy of air incursions, missile tests, and other military exercises?

The goal of what China is trying to demonstrate is, firstly, to show its own people that Beijing remains committed to unification with Taiwan, which serves a nationalist dimension.

The saber-rattling, tough language, missile tests, and incursions are signals that Xi Jinping is a tough guy who stands up for China. That he’s not afraid of the U.S. and that he means business and will take actions to defend China’s interests.

Taiwan is also a useful distraction for the Communist Party to offset dissatisfaction over declining economic growth rates.

For Taiwan itself, it’s a warning not to cross any red lines like making moves toward formal independence.

Its message to the U.S. is to intimidate it into agreeing not to help Taiwan and not to guarantee military intervention if its de facto independence is threatened.

How significant is support inside Taiwan for “reunification” with China?

There is almost no support for reunification in Taiwan. It’s something like 5% that wants reunification with China. The vast majority support the status quo, and about 30% support an official declaration of independence.

How significant is China’s development of a hypersonic missile test in terms of its military positioning vis-à-vis the U.S. and what could that mean regarding Taiwan?

A hypersonic missile gives China another credible nuclear threat against the U.S. mainland. There is no defense against it; it moves very fast and is difficult to detect. That is relevant to Taiwan because, with a growing nuclear arsenal, China is increasing the potential risk the U.S. takes in weighing intervention in blocking China’s designs on Taiwan.

This test was part of a larger program to modernize China’s nuclear program which is mostly an effort to deter the U.S.

How realistic is the fear that China will threaten Taiwan in the foreseeable future?

I do not think it is realistic for China to invade Taiwan. It’s not worth the potential cost and risk of war with the U.S., a war that China has no way of knowing how it would end. There is a high risk of economic catastrophe from a great powers war including mass deaths in China and other high costs that would not seem to justify what the CCP would gain with such a move.

What drives China’s to delegitimize and threaten Taiwan, given the international relations problems it causes?

It has a lot to do with the historical legacy of the civil war. The Chinese regard Taiwan’s autonomy as a humiliation and a signal that the CCP has failed to complete the job of national unification. Taiwan’s success raises questions about the “China dream” if the party can’t even get what they view as all of their own nation to sign onto the idea.

Its importance to Beijing is driven by politics and history; it’s symbolic. Economically speaking, Taiwan is less than 1% of China’s GDP, so it is not important from that perspective. China doesn’t need Taiwan militarily either.

What is your appraisal of the Biden administration’s response so far?

I think the Biden administration has moved in the right direction. They’ve taken a measured tone that shows a firm commitment to Taiwan as an ally. At the same time, the U.S. government’s repeated statements that they welcome cooperation with China and that they have no intention of making China an enemy are important.

It’s also important that the U.S. remain committed to the “one China” policy, which, in practice, is a way for America to say that it takes no position on the status of Taiwan and will agree to whatever they and China can mutually agree to.

What do you think is the best U.S. approach going forward on China and Taiwan?

I think the U.S. should work with other countries like Japan, Australia and the British to show that they also care about Taiwan. The U.K. sending naval ships through the Taiwan Strait sent a very strong message to Beijing. The Chinese need to see more of that, which will give them an additional reason to be more careful with their speech and actions on Taiwan.

What would be a red line that the U.S. should avoid?

The U.S. should avoid any statements from top leadership on Taiwanese independence which would be reckless and dangerous. They should stay away from actions that appear to elevate Taiwan to a nation status equal to China or welcoming Taiwanese leaders in any event that appears to formalize relations.

Large numbers of U.S. troops in Taiwan would also be a dangerous line to cross with China.

However, it is in the interests of both the U.S. and Taiwan that America continues to supply arms to Taiwan and helps it to maintain its own ability to defend itself. It shows our commitment and will continue to discourage China.