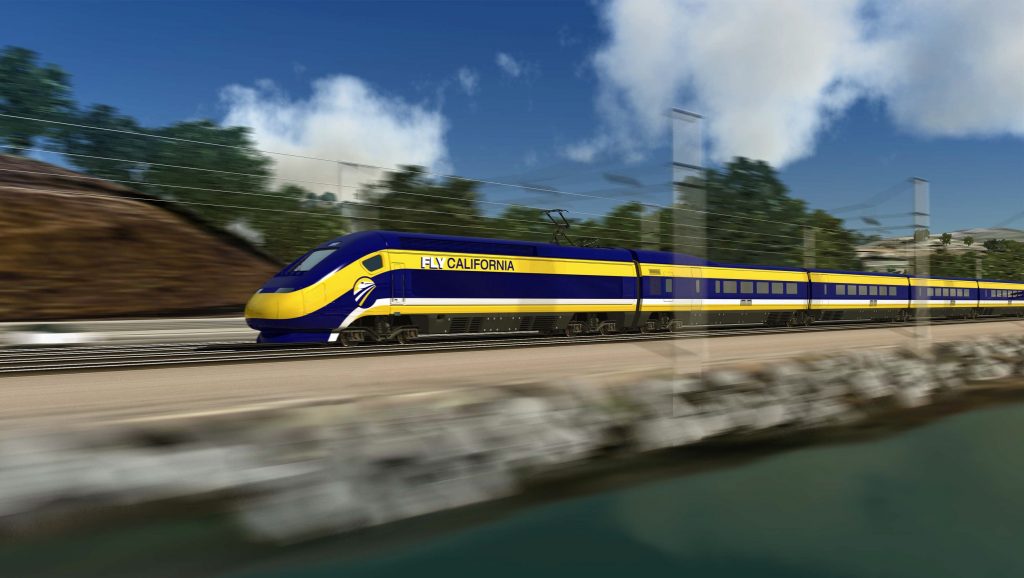 They moved to make way for California’s high-speed rail. Now they wonder: Was it for nothing?

(The Fresno Bee/TNS) – For more than five years, California’s high-speed rail project has disrupted and dislocated residents and businesses up and down the central San Joaquin Valley through the acquisition of property for the bullet-train right of way.

Some of those former property owners are wondering now whether their sacrifice — either through eminent domain or as leveraged sellers — will have been for nothing. Gov. Gavin Newsom’s change in priorities for the project, announced in his Feb. 19 State of the State address, and the Trump administration’s plan to cancel or pull back about $3.5 billion in federal grant funds awarded for high-speed rail construction in the Valley, have fueled uncertainty over the fate of construction in the Valley.

“It makes me angry, very angry, because we could have sold our house for so much more,” said Sheryl Haflich, who with her husband Bobby were stuck in limbo for several years until 2015, when the California High-Speed Rail Authority was legally able to purchase their home north of Madera. “We could have had a better start for retirement, and we could have gotten out when we wanted to instead of when they decided to.”

Hundreds of residents including the Haflichs and dozens of businesses up and down the route — from north of Madera to the Kern County community of Shafter — have been relocated to make way for what is supposed to be the spine of a statewide system of electric-powered passenger trains connecting San Francisco and Los Angeles at speeds up to 220 mph.

As of January, the California High-Speed Rail Authority had acquired more than 1,400 pieces of property that have been deemed necessary for the rail route and made those parcels available to its contractors for construction.

But that leaves about 400 more parcels of land in various stages of the purchase process, from making an offer to buy to reappraising to winding through the legal process of condemnation, according to information from the state rail agency. The slow pace of property acquisition is one of the nagging thorns in the rail authority’s side and is a considerable factor in the rising costs and slower-than-expected progress for construction in the Valley.

A state audit last fall criticized the rail agency for awarding construction contracts before it had enough property in hand to make meaningful headway, as well as for lax oversight of consultants’ contracts and other management problems.

While Newsom suggested in February that the state could complete a rail line between Merced and Bakersfield, he also added that “there simply isn’t a path … from San Francisco to Los Angeles. I wish there were.” That prompted criticism on Twitter from President Donald Trump and a letter from the Federal Railroad Administration stating its intent to cancel one grant agreement and seek a refund of another grant; the two agreements add up to almost $3.5 billion that was earmarked for construction in the Valley.

Here’s where it gets a little complicated. The federal funds are a key component — along with cap-and-trade money from the state’s greenhouse gas reduction program and money from Proposition 1A, a $9.9 billion bond measure approved by California voters in 2008 — to pay for the work now underway in Madera, Fresno, Kings, Tulare and Kern counties. Work on the Valley portion of the rail route carries an estimated price tag of $10.6 billion.

The rail authority’s share of cap-and-trade money, which comes from payments by companies to purchase air pollution credits to their emissions of carbon dioxide, is expected to add up to about $10.9 billion for construction statewide under its current authorization through 2030. Proposition 1A bond funds can only be used to match up against other money coming in for the rail project.

The rail authority did not address questions from The Fresno Bee regarding what could happen to Valley construction if the federal money goes away: Would current construction contracts be completed, or is there a danger, however remote, that overpasses, bridges and other structures would go unconnected and unused?

Or is there enough money coming through the cap-and-trade to at least cover the current construction contracts and complete a Bakersfield-Merced line?

A spokesman for the rail authority told The Bee that more details on the Merced to Bakersfield section would be addressed in a May 1 project update report to the state legislature.

That doesn’t do much to allay the concerns of property and business owners who have already had to sell their property and move aside for the would-be rail line.

Gary Lanfranco, whose family had owned a lot at the corner of Fresno and G Streets since 1900, was forced to relocate his popular Cosmopolitan Tavern and Italian Grill. He reopened in a new space about a mile to the east, at the corner of Ventura and O Streets in what used to be a corner of the Fresno Convention Center parking lot. While business in the new location is booming, “it was a tough transition,” Lanfranco said. “I never thought it would be completed.”

“I think it would be a terrible waste of the taxpayers’ money,” he said of the prospect of the Valley work uncompleted. But Lanfranco added that he wouldn’t be surprised. “I never thought it would be completed,” he said last week.

He’s not necessarily angry, however. “Honestly, the emotions and all the bad feelings have gone away,” Lanfranco said. “All of my emotion was spent during the transition time. … I’m 72 years old. I can’t sit around and worry about the mistakes the government is making.”

The Haflich family eventually relocated to Merced. But for years they were unable to sell their home — not to the rail authority or to anyone else — because of their location in the path of a future overpass on Road 27 over the planned rail route. The rail authority couldn’t buy it because the site was not initially part of the first construction segment, and no one else would touch it, either.

After wrangling with the rail authority and its agents for more than three years, Sheryl Haflich said she and her husband finally got the final settlement payment for their relocation costs. Now, their home is gone, their small orchard of trees is gone, and work is under way on the overpass.

There are plenty of other former landmarks along the rail line that are gone now, too. At Herndon Avenue and Highway 99, the Klein’s Truck Stop sign that for years beckoned truck drivers has come down, along with the truck fueling station, gasoline station/convenience store and a pair of fast-food eateries that once shared the 19-acre site. Farther south on the freeway, a string of motels are gone, including the Astro Motel with its neon-topped tower between Ashlan and Clinton Avenues.

Among the displaced businesses on Golden State Boulevard was Riverside Nursery, whose owner Mitch Hutcheson decided to close up shop rather than relocate, and Keith’s Automotive, whose landlord was bought out by the rail authority. But Nanette and Keith Erwin, who operate the auto shop, were able to stay on the property by relocating to another building that was far enough back to be clear of the construction — for now.

“We have a five-year lease and then another four years optional,” Nanette Erwin said. “That’s what we fought for, because we couldn’t find anything comparable.” For the Erwins, business has been relatively stable because their regular customers didn’t have to go searching for them in a new location.

But it’s been stressful. Five years ago, they were being pressured to find a new place and told they’d have to move. At that time, the Erwins said they felt like they were being “strong-armed” by relocation agents who said a 30-day notice to vacate could come at any time.

Now, the prospect of an unfinished railroad leaves them shaking their heads. “It’s kind of crazy … but it’s not a surprise,” Nanette Erwin said.

Also erased was Angelo’s Drive-In, whose owners Keav “Kay” Lim and Ken Chea opted to close up and sell their business on Olive Avenue just east of Golden State Boulevard to the rail authority in 2013 for about half what they said it would take to relocate and stay open somewhere else. Without money to hire an attorney, “what else can we do?” Lim asked at the time.

In Kings County, east of Hanford, what was once a peaceful collection of rural homes and lots along Ponderosa Road now is the site of a plant where concrete girders are being manufactured for the section of the rail line from south of Fresno to the Tulare-Kern county line. Some residents there were among the plaintiffs in a lawsuit that unsuccessfully sought to block the rail project from using the Proposition 1A bond funds for construction.

“Some of the people may have been smart to put a first right of refusal on their deal to buy their properties back” if the project doesn’t happen, said one resident who “just wanted to get on with my life” and didn’t want to be quoted by name for this story.

“I mean, what are people going to do?” the former Ponderosa resident added. “I just got to a certain point in my life where I realized this project was headed for disaster. … We are going to have these monumental structures and piles of dirt just laying around.” n