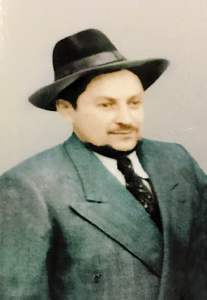 His childhood in Davyd-Haradok, Belarus, could be described as that of a living orphan. While his mother, Sarah, and his grandfather, Reb Dovid Meir Litvak, the shochet in town, did their best to provide stability in his life, life without his father, Reb Moshe, must have been tough.

When they married shortly before the onset of World War I, Reb Moshe began teaching in the local Tarbut school. Soon after, when his wife was expecting their first child, Reb Moshe was drafted into the Russian army, where he served for four years. Having learned to play the violin on the advice of his Rebbe, who told him it would come in handy, he was assigned to the military orchestra, which saved him from serving on the front.

When the war ended, Moshe was incarcerated by the Austrian government for another three years until they exchanged prisoners with Russia. During his years in the army, the family sent him letters inquiring about his welfare and informing him of the birth of his child, Leon, in 1914. Sadly, they did not hear back from him; they had no idea if he knew of the birth of Leon, or even if he was still alive.

Leon’s zeide, Reb Dovid Meir, once invited a guest home from shul who happened to have been a Rav in a distant shtetl. The Rav described how a Russian soldier approached him and related that he had become aware that his wife had given birth to their bechor, and he wanted to perform the mitzvah of pidyon haben with the only object of value he possessed: a silver cigarette box. When Reb Dovid Meir saw the box, he immediately recognized it as the one he had bought as a gift for his son-in-law, thus revealing that not only was his son-in-law alive, but he was aware that he had had a son.

The family worked tirelessly to achieve Reb Moshe’s release, but Leon was over 8 years old when he met his father for the first time.

As an adolescent, Leon was always sensitive to the needs of other people. The local baal agalah, the wagon driver who transported people from place to place before automobiles became the standard mode of travel, suffered a devastating blow when his horse suddenly died. The animal had been his sole source of income, and he was at a loss as to replacing it.

Leon leapt into action. He wanted to raise the funds to replace the horse, and nothing would deter him. He quickly wrote a script for a Yosef shpiel, a traditional play based on mechiras Yosef (the selling of Yosef by his brothers), and gathered the young boys in town, assigning each one a part in the production. They practiced for days, printed and sold tickets, cleared out a large barn for the performance, and shlepped anything which could serve as a seat, be it a broken chair or an empty crate. The play, in which Leon displayed his creative talents, was a major success, and the profits were used to purchase a new horse for the baal agalah.

In order to further develop the talents of his son, Reb Moshe purchased a violin for him, saying that just as the violin had saved him from serving at the battlefront, he was sure that it would “save [his son] in terms of gashmiyus and ruchniyus.” Little did he know how prophetic these words would turn out to be.

When World War II erupted, Reb Moshe refused the demands of the Russians to open the Tarbut schools on Shabbos, and he fled with his wife and daughter deep into Russia. Leon met up with them a bit later, and his musical prowess, which endeared him to the village leaders, saved him from conscription by the army.

Once again, Leon’s lyrical music saved the day, as he played his instrument and composed songs that gave fortitude and hope to the Jews stranded in Uzbekistan. With the war raging and the uncertainty over the wellbeing of their families, Leon’s sweet songs and rhyming Yiddish lyrics lifted their spirits and reinforced their faith.

Leon’s mother, widowed after the premature passing of Reb Moshe, was always ready to help out. Leon once brought home Yankel, a disheveled yeshivah student who had escaped from a Tajik leader who tried to force him to marry his daughter. Sarah insisted that he allow her to mend his torn pants and had him hand them to her through the nearly closed door. She painstakingly sewed the ripped garment until it was once again functional.

At the conclusion of the Holocaust, the communists put Leon in charge of arranging an orchestra to accompany a trainload of Polish citizens who were being repatriated. He assembled several Russian Jews, who were ineligible to go to Poland, and included them in his ragtag band. They in turn bribed the workers to disconnect their car and reconnect it to a train headed to Prague, Czechoslovakia. They eventually ended up in Paris, France.

Leon, or Yontel as his family called him, joined a group of Novardok talmidim in Paris who formed a yeshivah under the auspices of Harav Avraham Eliyahu Meises and Harav Mottel Pogramansky. Harav Meises knew of Yontel’s musical talent and encouraged him to utilize it to infuse the refugees with newfound emunah and bitachon.

As gatherings were organized, Yontel sang with great passion as the Roshei Yeshivah, Harav Meises and Harav Pogramansky, sat by his side. Indeed, Rav Mottel (who was childless) said, “Ich volt geven der gliklichster Yid, oib meine kinder volten gezungen meine leed — I would be the luckiest Jew if my children would sing my song.”

Yontel performed at weddings of the refugees, often playing and singing until the sun rose. His songs, infused with words of mussar, spoke about the beauty of Yiddishkeit and the sweetness of Torah.

One memorable wedding was that of his good friend Yankel from Samarkand. He regaled the guests with a song that described the trials and tribulations that Yakub had endured when the Tajik ruler sought to force him to marry his non-Jewish daughter, and how the memories of his mother’s licht bentchen and the words of Rava and Rav Papa in the Gemara that he had learned convinced him to flee. One Purim, Yontel and Yankel performed the song dressed in full Tajik regalia to the delight of the audience.

After Yontel and his family made their way to the United States, he learned for a while once again in the Novardok Yeshivah. He then rejoined the Stoliner Chassidim of his youth and served as the baal toke’a and baal tefillah on the Yamim Nora’im.

Harav Usher Yonah Weinberger, Temeshvarer Rav, zt”l was a Holocaust survivor who was given a brachah by the Ahavas Yisroel of Viznitz, zy”a, that he would emerge from the Holocaust with his entire family intact. He arrived on these shores in 1946 with 12 children; his youngest child was born in America soon after they arrived.

When Harav Weinberger was marrying off his oldest son, Rabbi Benzion Chaim Weinberger to Rivkah Weiss, he did not like the idea of using a secular band to play the music at the chasunah. He approached some musically talented Stoliner bachurim, Meyer and Leizer Klitnick, and requested they be the band to entertain at the wedding. Harav Weinberger even taught them some of the niggunim he had composed, some of which are still extant. Yontel played with the band and even served as the badchan.

The Stoliner Rebbe encouraged this enterprise, and the Stoliner Band became the first Jewish band to entertain regularly at weddings. Although in Europe Yontel had played the guitar, he ceased using it in America when it became the symbol of the counter-culture movement. He played the accordion at simchos, mostly with his eyes closed in order to avoid immodesty.

When his son came home from preschool singing non-Jewish melodies, Yontel questioned their teacher, Morah Blanka Rosenfeld, as to why she used non-Jewish songs. “There are no Jewish songs available for the young children,” she replied.

So Yontel decided to create some of his own and produced two records, entitled Yiddish Nachas and Shma Beni, with Yiddish songs appropriate for Yiddishe kinderlach. Morah Blanka subsequently produced the series of Mitzvah Tree recordings, and she credited Yontel, or Reb Yom Tov Simchah Ehrlich, for being the inspiration for her endeavor.

Reb Yom Tov would go on to produce 36 records of Yiddish songs of inspiration to instill yiras Shamayim in the new generation. The Jewish radio station, WEVD, offered him a slot to broadcast his songs on Erev Shabbos. When it once fell on Erev Yom Kippur, he wanted to avoid singing, but the Rebbe refused to allow him to cancel. Left with no choice, he closed his eyes and sang his classic work about a captain who returned to Yiddishkeit after hearing Kol Nidrei. As he opened his eyes after he finished singing, he was astounded that the workers at the station, Yiddish-speaking secular Jews, were silent and shedding copious tears.

Reb Yom Tov Simchah Ehrlich was niftar on Erev Shabbos, 27 Tammuz, 5750/1990. In subsequent years, two sets of descendants of Reb Yaakov Potash and Reb Yom Tov Ehrlich were married, cementing the relationship that began decades ago in the hinterland of Samarkand.

The Satmar Rebbe, zy”a, once said, “K’shemo kein hu — his name describes him perfectly. When he comes, it is Yom Tov; wherever he goes turns into simchah — and whatever he does is ehrlich.” Indeed, it was Yom Tov in der vochen.

The author would like to thank the daughter of Reb Yom Tov, Mrs. Feige Schlesinger, and his sister, Rebbetzin Rivka Kaluszyner, and her daughter Mrs. Dina Storch for their assistance.