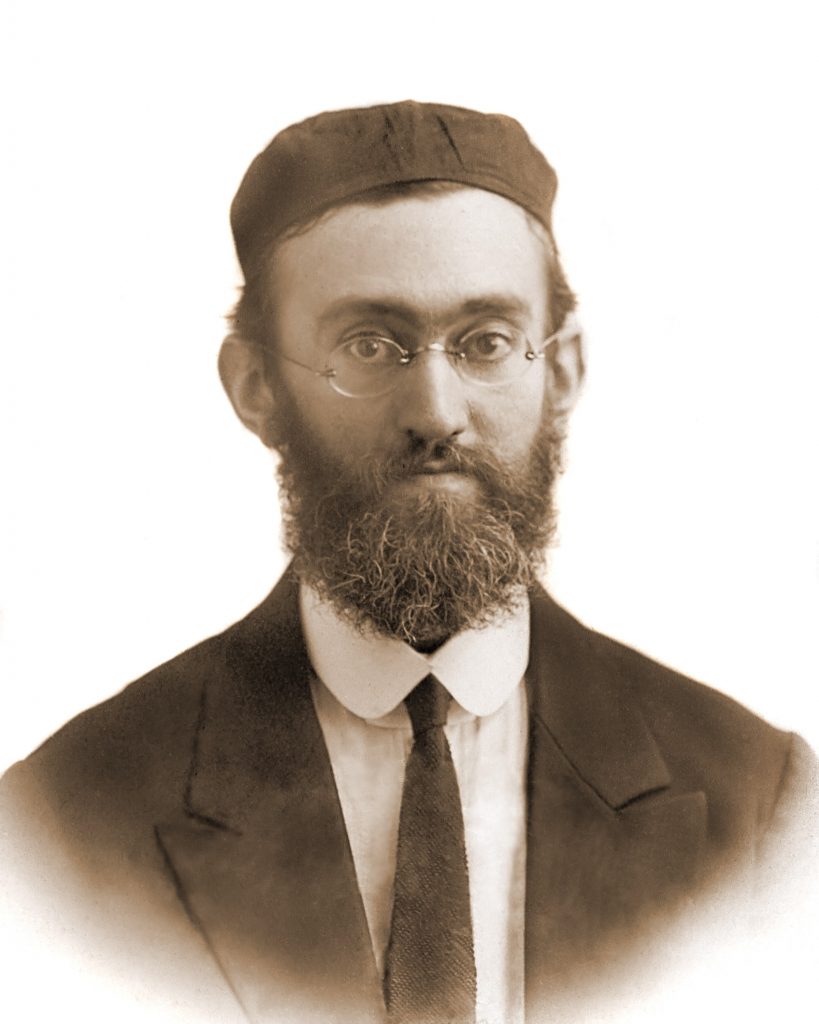 Zussman was unusual for a boy born in 5653/1893 in New York. His father, Reb Yosef, was one of the rare people who had been granted permission by his Rebbi, the Chofetz Chaim, to move to America. Indeed, he remained steadfast in his conduct, maintaining his beard and peyos in the face of derision, yet he was friendly and pleasant to those around him. When another person later made a similar request of the Chofetz Chaim, he only consented to the move on the condition that the petitioner set up a learning session with Reb Yosef immediately upon his arrival in America.

Reb Yosef kept up his correspondence with the Chofetz Chaim through letters, serving as the fundraiser for the yeshivah in Radin and distributing the sefarim of his Rebbi in America. When Reb Yosef requested permission for his son Zussman to translate the Sefer Machaneh Yisrael into English, the Chofetz Chaim responded, “Bilado lo yarim ish es yado — No other [person] has permission to put his hand [to this sefer].”

Zussman was one of three boys born to Reb Yosef and Chiyena, and he began his learning in Yeshiva Eitz Chaim. In 5677/1917, at the age of 24, he received semichah from Harav Shalom Elchanan Jaffe, zt”l, the Rav of Beis Medrash Hagadol of the Lower East Side, who wrote that Zussman was proficient in most of Shas.

Zussman observed that the youth of his time were being lost due to the disconnect between them and their parents. The younger generation wanted to pursue the proverbial American Dream, which they believed to be incompatible with the ways of their parents. Zussman came to the conclusion that in order to influence them to be committed to Torah and mitzvos, he needed to demonstrate that indeed one can maintain a high level of keeping Torah and mitzvos while achieving success in America.

To this end, he enrolled in Columbia University where he earned a doctorate in mathematics. Once, when an exam was scheduled on Shavuos and he was not permitted to take it at another time, he forfeited the work he had done and enrolled in another course instead. Though he was able to remain true to Torah while in college, later in life he expressed his anguish that others who followed his path were negatively affected.

Before long, he began teaching math in the high school of Yeshiva Rabbeinu Yitzchak Elchanan (RIETS) while spending his mornings learning in the beis medrash, where he answered the questions of the older talmidim. The classes he taught in the afternoon, while ostensibly in math, were indeed a conduit for him to infuse his students with other important lessons. As Harav Mordechai Gifter, zt”l, related, “Officially he was our math teacher, but in practice we received from him a great deal of Torah and yiras Shamayim.”

Each afternoon, as he began his class, he would announce, “Did anyone not daven Minchah yet?” If there was a minyan, those who had not yet davened would go to another room to daven in there; if there was not a minyan they would daven alone in the classroom.

He once noticed that the desk of a student was broken, and the boy was using his gemara to support his arm to take math notes. Zussman objected by gently telling the boy, “You may use math to help you with Gemara, but you may not use a gemara to help you with math!”

At the time, a large percentage of the Jewish youth in America were being lost to authentic Judaism, and in 5672/1912 some dedicated Jews began organizing lectures on topics in halachah and hashkafah for them. The Conservative movement pounced on this opportunity, offering to supply speakers for these lectures. Zussman saw the danger this posed, and in turn offered to come and teach at any time and any location, all without any thought of compensation. This group eventually formed the Young Israel movement, and during the first few years, when many branches did not yet have a Rav, Zussman would write up a drashah that was distributed to all those branches and a layperson would read it to the congregation on Shabbos. Meanwhile, Zussman served as the Rav of the Young Israel of Manhattan from 5679/1919 until his retirement in 5722/1962, when he moved to Eretz Yisrael.

In 5681/1921, Zussman married Rochel Chiyena, who shared his passion for spreading Yiddishkeit. Together, they continued drawing others closer to Hashem through his teaching and her dedication to tzedakah and chessed.

In Morei Ha’umah (3:78), Harav Yisrael Shurin relates a story he heard from Rabbi Avraham Yitzchak Feivelson. When Rav Feivelson accompanied the Kovno Rav, Harav Avraham Duber Kahane (the Dvar Avraham) to America in 5684/1924, a young couple came to visit him and presented a she’eilah. On the day they married, they had made up to fast every Monday and Thursday. Now, when the wife was expecting a child, the fast was difficult for her, and her husband felt she should be matir neder. This young couple was Zussman and Rochel Chiyena.

When Zussman was offered the position as Menahel of the elementary school in Yeshiva Torah Vodaas in 1927, the family moved to Williamsburg to be near the yeshivah. However, Zussman he did not vacate his position as Rav in the Lower East Side. Zussman had a sefer Torah in his house, and after eating his seudas Shabbos, he arranged an early minyan for Minchah so that he would have time to walk to the Lower East Side to give his shiurim at the Young Israel. Since there were conflicting opinions over whether crossing the Williamsburg Bridge was considered going outside the techum Shabbos, Zussman would place an eiruvei techumin on the bridge each Friday to allow him to cross on Shabbos according to all opinions.

In yeshivah circles, this tzaddik, Rabbi Dr. David S. (Dovid Zussman) Stern, was identified as “the Americanborn Chofetz Chaim.” Harav Yaakov Kamenetsky, zt”l, once told Rabbi Shlomo Abba Gross, Rabbi Stern’s grandson, “You don’t know who your grandfather was; your mother doesn’t know who her father was; and his best quality was that he didn’t know himself who he was!”

When Rabbi Dr. Stern retired in 5722/1962 and moved with his wife to Eretz Yisrael, they lived next door to Harav Shlomo Zalman Auerbach, zt”l, with whom he spent many hours learning. Rav Shlomo Zalman told Harav Yechiel Michel Stern, shlita, a nephew of Rabbi Stern, “We cannot fathom what a lamed-vav tzaddik is, but according to our limited understanding, he was one of them.” In addition, Rav Shlomo Zalman would come every Erev Yom Kippur to receive Rav Dovid’s brachah until Rav Dovid was niftar on 10 Menachem Av, 5769/1969.

“‘U’matzdikei harabim kakochavim l’olam vaed — And those who make the many righteous are like stars forever and ever’ (Doniel 12:3). These are the teachers of young children” (Bava Basra 8b). Indeed, Harav Dovid Zussman ‘Stern’ was a bright, shining ‘star.’