Potter’s Personality: An interview with potter Daniel Flatauer of Tzfas 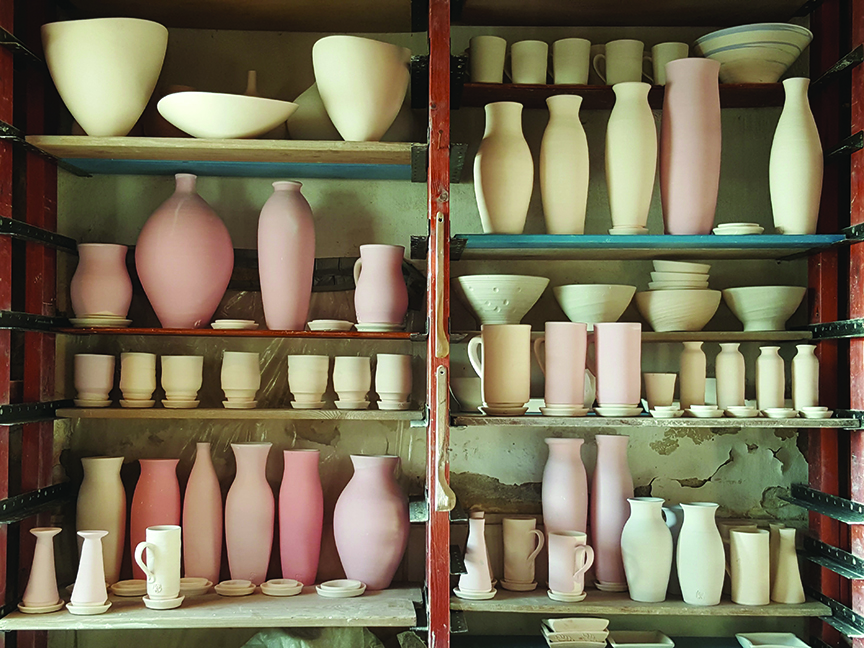 While traveling from England to Japan, Daniel Flatauer decided to stop off for a short visit in Eretz Yisrael. However Hashem had other plans for this talented young potter and he never left.

Daniel Flatauer, born and raised in a town north of London, was initially interested in helping children as a career. At first, he thought the best way to achieve that goal would be to study educational psychology. He then went on to obtain a post-graduate degree in psychology.

Although art was not regarded as a serious subject at that time, Daniel also studied arts and crafts, including origami, the art of Japanese paper folding. Then he obtained a position as a village teacher for 7- and 8-year-old pupils. After a while, he realized the job was not a good fit for him and pursued other interests.

Handmade pottery, popular in the 1970s, was sold then in stores. Daniel became an apprentice to a master potter, Bernard Leach, who taught excellent craft pottery. Then he started from scratch, becoming an apprentice to another potter named Robin Welch who taught him how to run a pottery studio.

Daniel planned to continue his ceramics studies in Japan, traveling through several countries along the way. After visiting Morocco, Algeria and Tunisia, he decided to stop off in Israel to visit some relatives. This decision would change his life.

As soon as he arrived in Haifa, without knowing a word of Hebrew, he felt that he had come home. After a brief visit with his secular relatives, he decided to move to Jerusalem, feeling that “When you don’t know what you’re doing, Jerusalem is a great place to do it in.”

He learned in Ohr Somayach Yeshiva for several years, becoming a baal teshuvah. He learned in the mornings and worked in pottery studios in the afternoons. He also developed an interest in Kabbalah and worked for a time as an editor.

Then he met his zivug, Helen, a social worker from New York. After their marriage, they lived in the trendy Yerushalayim neighborhood of Nachlaot, on a street near Rechov Tzfas. However, they soon discovered they could not afford to live in Yerushalayim, as Daniel would not be able to earn a living there as a potter. He wondered how many clay cups he would have to produce to generate sufficient income for their needs.

The name of the nearby street may have been a siman for the young couple, and they soon relocated to the town of Tzfas, accurately described as “like Nachlaot, but cheaper.”

Housing was definitely more affordable in the small northern town. Daniel dreamed of having his pottery studio adjoining his home. The Flatauers bought a very old small house on the outskirts of Tzfas’ Artists’ Quarter.

Eventually, Daniel built a large home next to the old one, which now serves exclusively as his studio and gallery. Though Daniel had never built a house before, he studied and observed other house builders, teaching himself the necessary skills. The final product is a beautifully built creation, combining the old and the new.

Next Daniel obtained a gas kiln and set to work. Believing all newcomers to Eretz Yisrael bring their own traditions with them, he combines his pottery tradition with Jewish tradition.

“Clay is my teacher,” he maintains. “It reflects back to you what you have done.”

He finds inspiration in the creation of earthenware objects, specifically Judaica items, as an expression of Jewish connections to clay. He points out that there are several references to clay found in Jewish texts, such as in Yirmiyahu (18:6): “O house of Israel, cannot I do with you as this potter?” asks Hashem. “Behold, as the clay in the potter’s hand, so are you in My Hand, O house of Israel.”

The Yom Kippur piyut we said on Kol Nidrei night, “Like the clay in the hand of the potter, He expands it and contracts it at will,” expresses the concept that Hashem shapes and molds each person. 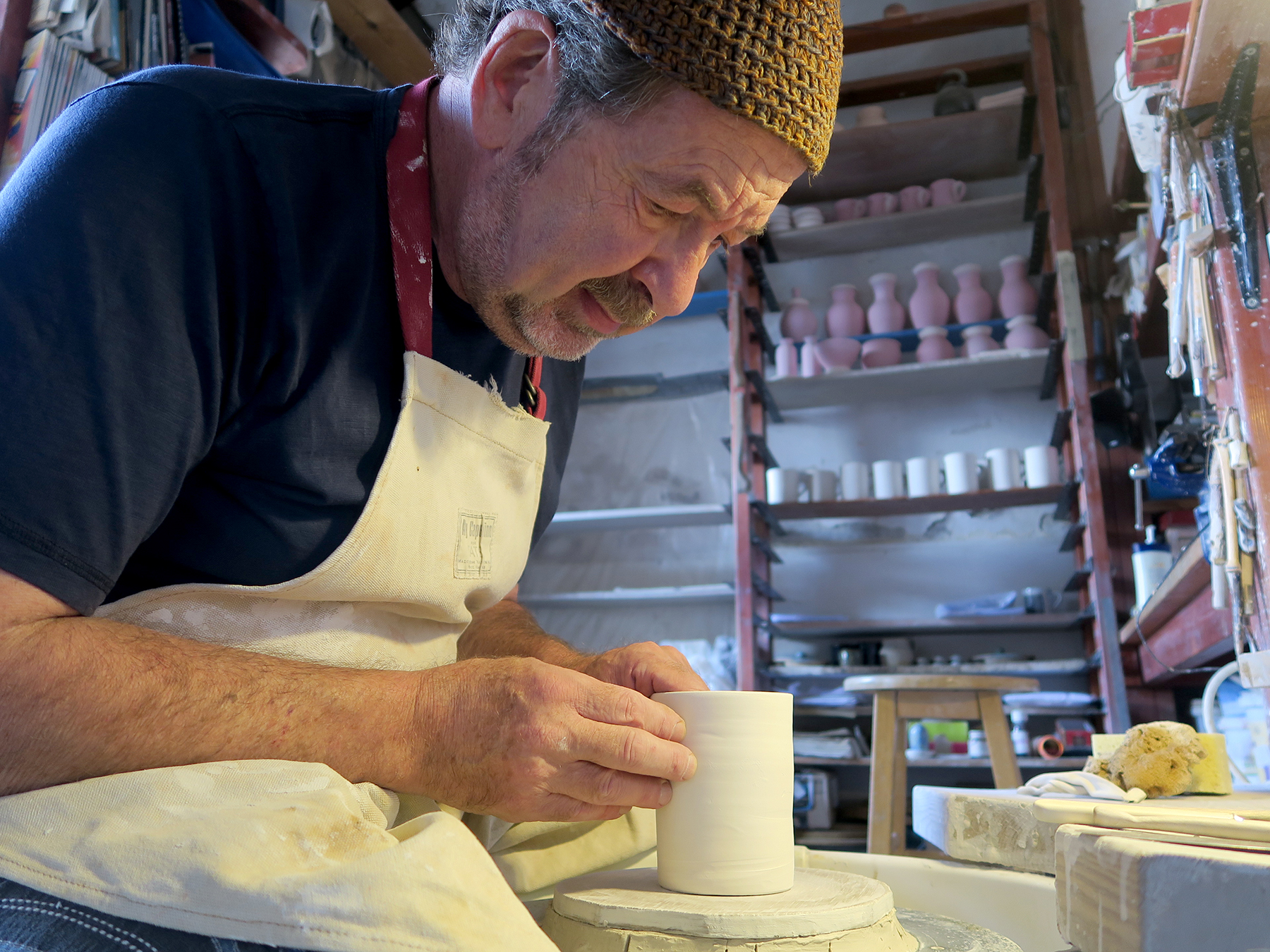 Daniel feels that clay is not completely inactive but maintains its own “personality.” He discusses Hashem’s choice of clay as the material used to shape Adam. Daniel feels that every piece of clay contains aspects of its craftsman.

Working with a wide variety of textures, forms and techniques, he enjoys experimenting with different methods, such as trying new glazes and shapes. In addition to lovely practical kitchenware, like serving dishes, teakettles and plates, he creates specific items for Shabbos and the Yamim Tovim, such as Kiddush cups, candlesticks, washing cups, menorahs and ke’aros (Seder plates).

“In Tzfas,” says Daniel, “there’s a fine balance between peace and quiet and time to produce work, and invariably interesting customers (local and from all over the world) for whom the pottery they buy is a reminder of their Tzfas experience.

“When you work with clay, every piece contains an aspect of you. Looking at my work, I see both England and Israel [and Japan], the influence of many other admired potters and teachers, friends, parents, students and customers. It seems to me that function, usefulness, is the key — we learn something new, embody it in a shape, a glaze, a firing technique, and then pass it on by selling it to become part of someone else’s story.”

Daniel’s gallery is located on Rechov Yud Alef on the edge of the Artists’ Quarter. He enjoys the feeling of unity there, as craftsmen and artists work together, helping each other in this peaceful town surrounded by lovely blue-tinged mountains. The kabbalists who lived in Tzfas centuries ago, he claims, also felt the energy of this place.

He works at his craft all day. Firing the kiln takes about nine to ten hours. He welcomes visitors — sometimes many at a time, sometimes only a few. Yet his emunah remains strong, trusting that Hashem will send him exactly the parnassah that he needs.

“Whatever happened to the idea of going to Japan?” I ask.

That visit did take place, about 30 years after he first thought of the idea. It was an interesting experience, Daniel claims, but then he returned home to his family and his life in Tzfas.

All photographs copyrighted by Daniel Flatauer.