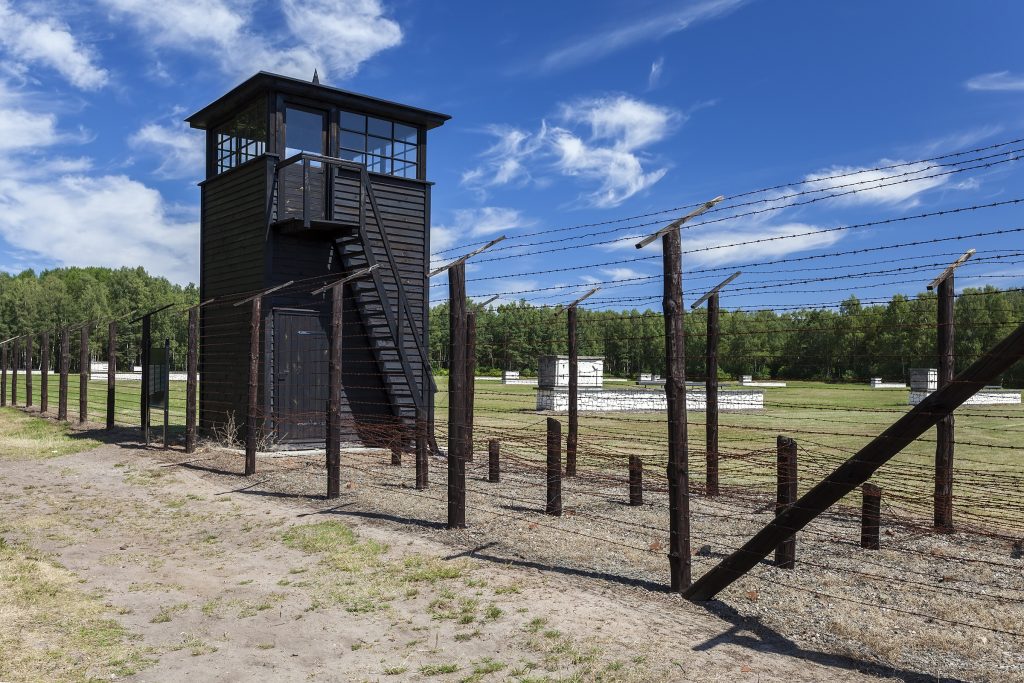 Bruno Dey was just 17 years old when he stood guard atop a watchtower in the Stutthof concentration camp near Danzig, Poland. His recent conviction in a German court for his crimes is very likely the last of its kind. There has been much commentary surrounding this event, from Dey’s light sentence to his apology — which was uttered only after he faced jail time. In my mind, there was a more important aspect of this trial, which I found most appropriate as this chapter of history comes to a close. In every photo, the defendant is covering his face with a blue folder, so that not one image of him has been publicized. This, despite the fact that Dey’s lawyer was reluctant to say that his client accepted his guilt. “Even if you accept the verdict, it doesn’t mean you necessarily accept your guilt,” the attorney told a reporter.

You don’t have to be a psychologist to know that covering your face is a sign of shame and guilt. Dey was convicted of accessory to murder, because as a guard his role in the death of Jews was to prevent their escape. By this logic, Dey’s conviction can be applied to every country that played the same role of preventing Jews from escaping certain death. His blue mask of shame belongs not just over his own face, but over the rest of the world that stood by while Six Million were murdered.

One example of such guilt is the Bermuda Conference, where officials from the U.S. State Department met with British officials to discuss the fate of European refugees. Bermuda was chosen because few reporters could travel there, and no Jewish leaders were allowed. When the conference wrapped up with no results, Jewish organizations published a large ad declaring the conference a “cruel mockery” of the Jews of Europe. At precisely the same time that these politicians relaxed in Bermuda, the Jews trapped in the burning Warsaw ghetto radioed a message to the West, ending with the words “SAVE US.”

I am also reminded of a conversation that took place in 1942 near Lublin, as told by a witness at the Nuremberg trials. Hitler and Himmler visited the local SS chief, an Austrian monster named Odilo Globocnik, to discuss methods of extermination. The suggestion arose that it would be wise to cremate the dead Jews instead of burying them “as a future generation might think differently of these matters.” Globocnik replied, “But gentlemen, if after us such a cowardly and rotten generation should arise that it does not understand our work which is so good and so necessary, then, gentlemen, all National-Socialism (Nazism) will have been for nothing. On the contrary, bronze plaques should be put up with the inscription that it was we, we who had the courage to achieve this gigantic task.” Hitler agreed: “Yes, my good Globocnik, that is the word, that is my opinion too.”

It may be small consolation, but at least in the world in which we live, the perpetrators of the Holocaust are still enshrined in guilt. Even Ayatollah Khomeini was forced to clarify an Iranian poster bearing the words “final solution,” claiming that he did not support the annihilation of Jews.

It’s too evident, however, that for the most part, the apologies over anti-Semitic behavior are nothing more than lip service. Last year, The New York Times issued an apology after publishing an anti-Semitic cartoon featuring the president and the Israeli prime minister. Yet there was no apology after Jewish writer Bari Weiss published a scathing letter announcing her resignation from that very newspaper, including claims that she was called a “Nazi” by her coworkers. Those claims were not even disputed; her former employer simply swept the entire affair under the rug. The difference between the cartoon and Weiss’s letter is obvious: the former was excused as an editor’s mistake, while the latter was a very accurate personal account of the bullying, hatred and bias that infects nearly the entire Times editorial staff.

By all indications, this trend will only worsen over time. It may not happen in our lifetime, but there will come a day when the words “Nazi” and “Holocaust” will not represent the same evil as they do today. Some of that will happen when the last survivor has passed away — a somber milestone that will likely embolden those who seek to downplay the magnitude of the Holocaust.

But when we no longer have the survivors among us, we will also be rid of every last SS member and Nazi soldier. A moment’s reflection will reveal the chasm that exists between these two groups. For the past almost eight decades, we have treasured our parents and grandparents who lived and died under the Nazis. How many stories of valor, of chessed, of superhuman strength have been told, inspiring endless generations to come? Let us be consoled by the fact that while the Holocaust has left the nations of the world with guilt and shame, we can be proud of our legacy of honor and kiddush Hashem.

Rabbi Eli Lefkowitz is a Rebbi in Monsey and the director of the Mesivta Division of Project Witness.