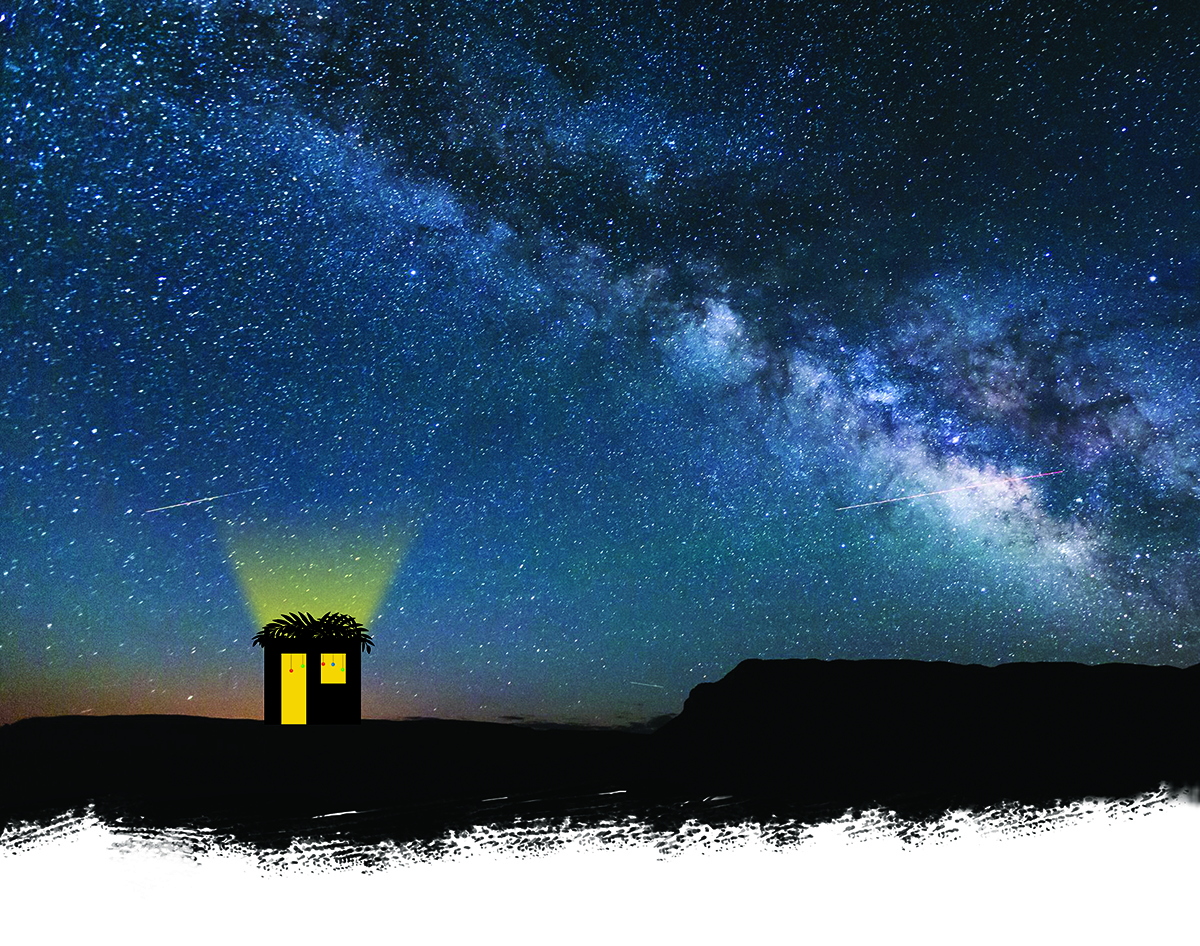 “And He (Hashem) took him (Avraham) outside and said: ‘Observe the heavens and count the stars…’” (Bereishis 15:5).

With the mitzvah of sukkah, Hashem takes us outside as well. Halachah dictates that by day the s’chach must hide the sun, while at night individual stars are seen peeking through it.

It is worth your while to spend an evening in a very dry, totally dark place like Flagstaff, Arizona, or the Negev’s Mitzpe Ramon. Gazing at the utterly vast star-studded heavens on a clear night, you will surely experience that humbling indescribable spiritual elation that Dovid Hamelech put in words: “When I behold Your heavens, Your handiwork, the moon and the stars that You established; what is mankind that You even reckon with?” (Tehillim 8:4,5).

Unless you are familiar with some astronomy, the sky seems like one single beautiful twinkling jeweled tapestry. Awe-inspiring, yet inscrutable.

But it is much more.

Our own star, the sun, is so powerfully close and overwhelming that everything else in the sky becomes marginalized. The mitzvah of sukkah takes us out of our routines and out of our preconceptions and puts our focus on that great beyond. That is why the sun is supposed to be hidden by those s’chach sticks by day, while after dark the stars should be seen twinkling between them.

A MATTER OF PERSPECTIVE

Harav Dovid Shoham, zt”l, the Doliner Maggid, had difficulty understanding a particular dvar Torah of the Baal Shem Tov that he was studying. It troubled him so much that he travelled all the way to Polno’a to ask the great “Toldos” – Reb Yaakov Yosef, zt”l – to help him understand it. The Toldos was nearing the end of his 110 years and his weak body was hanging in a cradle from the ceiling. It is said that he was so excited to expound on this topic that the very walls of his room vibrated. His explanation took many, many hours and continued well into the night. Afterwards, he pointed to the window. “Do you see those stars?” he asked. “They look so tiny yet each one is larger than the entire world. So it is with the words of my great master the Baal Shem Tov. From far they seem small, but when they are examined up close, they are as big as all the world.”

Because they are so distant, the sizes of stars can be deceiving. One example is the star Antares (Ibn Ezra in Iyov 38 calls it Lev-Akrav), that is clearly visible in the southwest sky as a bright red star early on summer nights. Antares is very far away. If it were the size of our sun, we would be unable to even see it. It is only visible to us because it is half a billion times larger than our sun. In fact, if it would be located where our sun is, we would actually be inside of it, burnt to a crisp. Actually, compared with many other stars, our sun is quite mediocre. But don’t make light of it either; it is 1.3 million times larger than Earth.

The fact that there are English words for extremely large numbers can make them seem almost within our grasp. In order to understand their magnitude, just imagine counting numbers, one number per second, without stopping day and night.

It would take you 12 days to count to a million.

It would take you 32 years to count to a billion.

All the stars we can see on the clearest night with our naked eyes are only a small portion of our galaxy, our cluster of stars. The estimated number of stars in our own galaxy is a bit under a trillion, and we can only see a tiny fraction of them.

Just a few months ago, analysis of Hubble telescope photos increased estimates of the number of galaxies in the observable universe to two trillion. Each galaxy, in turn, has its very own billions or trillions of stars. Next year, in October 2018, the Webb telescope is scheduled to be launched into space. With its enhanced capacity for detecting weak infra-red starlight from the most distant sources, even this estimate of galaxies is likely to leap dramatically. The revelations of these great discoveries go hand in hand with the great strides mankind is making in technology, preserving our humility.

Adam and Chava could have been created as marine creatures or been placed on a cloud-covered planet like Venus. The sky would always have been hidden, and it never would have occurred to us humans that there was anything out there but our immediate world. The Ribbono shel Olam clearly wanted us to behold the awesome vastness of His creation. Keep in mind that we are talking only about the observable universe. Who knows what fraction that is of the entire universe? Going a step farther, who knows what else is out there that our senses are not even able to detect? 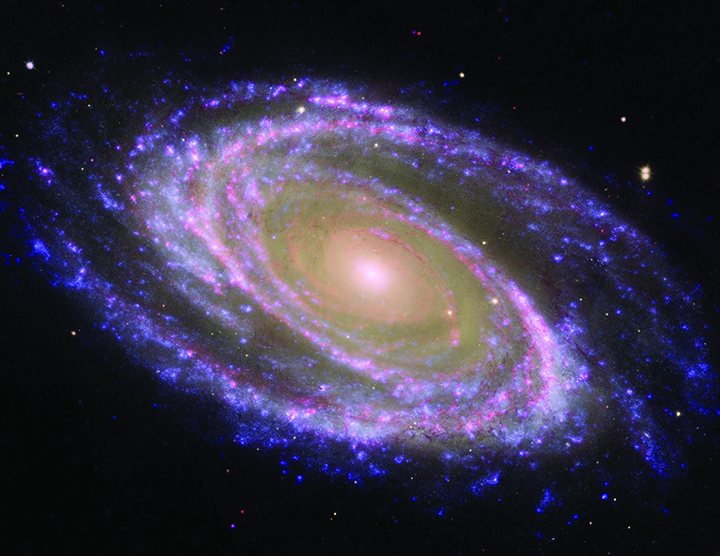 Harav Chaim Yisroel Belsky, zt”l, was well-versed in astronomy. His greatness was not only in his Torah but also in his tefillah. He once told me that in order to instill trepidation in his heart, in Shemoneh Esrei, when uttering the word “Hanora” (the awesome One), he would focus his mind on the immense distances and magnitudes of the stars.

This is the concept of Yiras Haromemus – awe-driven fear. When we stand in prayer, we are given the license to directly address the Creator of all these trillions of trillions with the familiar “Atah – You,” and we are assured that He is listening to every word we say and is even attuned to our very thoughts.

Because our brains are wired to think of all that we know in our limited human terms, even our greatest physicists and thinkers weren’t given the tools to fully “know,” in cognitive, non-mathematical terms, such true phenomena as infiniteness, black holes, quantum mechanics, and perhaps multi-dimensional space. How much more “unknowable” is the Creator of this universe of ours! For the Ribbono shel Olam, who is Ein Sof—infinite and timeless—our size, compared to that of the rest of the universe, makes no difference. Would we be more important to Him if the universe was smaller? The relative vastness of the universe does, however, have the power to instill into us an overwhelming sense of awe—“Da lifnei mi atah omed – Know before Whom you stand.”

It is said of the Satmar Rav, zt”l, that when he stepped outside after dark, he would always glance up at the night sky. The haftarah of Shabbos Nachamu concludes with: “Lift your eyes up high and see Who created all this. He counts their multitudes in numbers and gives names to all of them…” (Yeshayah 40:26).

Numbers express separateness. Names go beyond that; they express uniqueness. Your name is yourself and there is no other “you” anywhere else in the world. Even if you are an identical twin, you know how you differ. Stars deliver a much more profound message than just multitude. No two stars are exactly the same. Each one of the trillions of trillions is unique. Each and every one has its very own name and destiny designated by its Creator.

When Hashem took our father Avraham outside on that starry night in the (Jewish) year 2018, He concluded His promise with the words: “Koh yihyeh zarecha – So shall be your children.” The heilige Ruzhiner, zy”a, said that every single member of Bnei Yisrael is like a unique diamond. No matter what the quality is of a precious stone, it must be in its proper setting to be appreciated, to achieve its full potential. So too, every single Jewish man and woman has a special quality that no one else has. The passuk states: “Ul’chol Bnei Yisrael hayah ohr b’moshvosam—All the children of Israel had light in their settlements” (Shemos 10:23). The Ruzhiner interprets this as: “Each and every one of the children of Israel shine in their proper settings.”

This oft-quoted adage resonates so powerfully with our generation. For many sociological reasons, most of us tend to cluster in large communities. As a result, being the absolute best in any field can be quite elusive. There is always someone better than you. Unlike the stars in heaven, some waste a lifetime trying to become who they are not and will never be. This is not only unproductive, but downright devastating.

On Sukkos, we also have the mitzvah of arba minim.

As Chazal tell us, the arba minim symbolize different types of Jews – with or without Torah, with or without mitzvos – with their infinite shades and nuances. Taken together, each Jew complements and supplements the others. Every Jew, even one with neither Torah nor mitzvos, is important. Each one has a unique role. Visit the largest shul you can find on Sukkos and observe everyone marching by during Hoshanos. You will never find two sets of arba minim that cannot be distinguished from each other. Each set is remarkably unique. This is because each one of us is also remarkably unique. Each one of us is worthy of respect – the wise and the not-so-wise, the wealthy and the poor, the old and the young, the strong and those physically or mentally impaired. Every single individual in Klal Yisrael has something special to contribute, shining in their settings – another star in the heavens.

That is the message of Sukkos. Get up and get out of the house. Better yet, get out of the Solar System. Appreciate the utter vastness of the universe while also appreciating its magnificent diversity. Then apply those lessons to your yiras Shamayim and your ahavas Yisrael.