In the Palace of the King 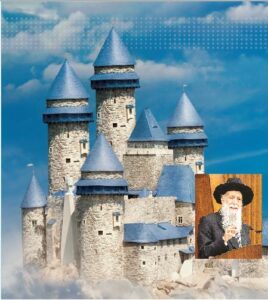 “Bayom Hashemini mikra kodesh yiheyeh lachem v’hikravtem isheh laHashem atzeres hi … — On the eighth day it shall be a calling of holiness for you, and you shall bring a fire offering to Hashem, it is restraining …” (Vayikra 23:36)

“Atzeres hi — I keep you back with Me one day more. It is similar to the case of a king who invited his children to a banquet for a certain number of days. When the time arrived for them to take their departure, he said, ‘Children, I beg of you, stay one day more with me; it is so hard for me to part with you!’” (Rashi loc cit.)

As we near the end of a month that included Rosh Hashanah, Aseres Yemei Teshuvah, Yom Kippur, Sukkos, Hoshana Rabbah and now Shemini Atzeres and Simchah Torah, it is appropriate to examine what it means to have been together with Hakadosh Baruch Hu, how this obligates us to act, and how we can take the lessons of these auspicious days along with us as we depart from the King’s palace.

The Tur (O.C. 603) quotes the words of the Yerushalmi in Shabbos (1:3), which tells us that Rabi Chiya told Rav that if he cannot be vigilant to consume his food b’taharah (without it being tamei) all year, he should at least observe this for seven days of the year. The Avi Ezri states that he has a kabbalah that these seven days refer to the days between Rosh Hashanah and Yom Kippur. Since on Rosh Hashanah and Yom Kippur a person must be vigilant because “a person must purify himself on the chag,” Rabi Chiya mentioned only the seven intervening days between them, but in essence it means to be extra vigilant for the entire Aseres Yemei Teshuvah. For this reason, the minhag in Ashkenaz is that even a person who is not strict concerning the consumption of pas palter (bread baked by a gentile baker) the entire year should avoid its consumption during Aseres Yemei Teshuvah.

There is a question asked on the words of the Tur: What type of teshuvah is it to refrain from pas palter for these 10 days and then go right back to our old ways after they are over? If, as part of our teshuvah, we wish to accept upon ourselves the stringency of those opinions that pas palter is not to be consumed, then shouldn’t we do so permanently? And if we retain the opinion that it is permissible, why refrain from eating it during Aseres Yemei Teshuvah?

To understand this, let us examine what it means to be a chassid in the context of the words of Chazal. The Yerushalmi in Terumos (8:4) tells of a person who was wanted by the government for a capital crime. He ran to the city of Lod, where Rabi Yehoshua ben Levi presided. The army surrounded Lod and demanded that they turn over the offender, threatening to annihilate the entire city if they did not comply. Rabi Yehoshua ben Levi convinced the person to give himself up in order to save the rest of the residents of Lod.

The Yerushalmi tells us that Rabi Yehoshua ben Levi used to learn with Eliyahu HaNavi, but after this episode Eliyahu ceased to appear to him. He fasted many fasts and then Eliyahu HaNavi once again appeared. Eliyahu explained, “V’chi l’mesores ani nigleh — Should I reveal myself to an informer?” The implication was that Rabi Yehoshua ben Levi was considered a moser, and informer, for giving over the person to the gentile army. To this, Rabi Yehoshua replied, “V’lo Mishnah asisi — Have I not done what the Mishnah says?” The Tosefta (7:23) states that if an army besieges a city and demands that they hand over one random person or the entire city will be killed, it is prohibited to hand anyone over. However, if they specify which person they want, and that person is guilty of a capital crime, as in the case of Sheva ben Bichri who rebelled against Dovid Hamelech (see Shmuel II 19-20), then it is permissible to hand over the individual to the army. Eliyahu HaNavi then told Rabi Yehoshua ben Levi, “V’zu Mishnas Chassidim — Is this Mishnas Chassidim?”

Let us carefully examine the words of Eliyahu HaNavi. At first, he called Rabi Yehoshua ben Levi a moser, an informer, meaning that he had done one of the worst aveiros possible by handing a Jew over to the gentiles for execution. If what Rabi Yehoshua ben Levi did was within the letter of the law, and he just did not go lifnim mishuras hadin and act like a chassid, why did Eliyahu call him a moser? Wouldn’t it have been more appropriate for him to say, “You haven’t gone lifnim mishuras hadin, so I will no longer come.” Is someone who doesn’t act lifnim meshuras hadin regarding this halachah considered a moser? Furthermore, what did Eliyahu HaNavi mean when he said, “V’zu Mishnas Chassidim?” What is Mishnas Chassidim?

The Yerushalmi teaches that for a person who is a chassid and is closer to Hashem, there is a different set of halachos. What for others is optional and considered lifnim mishuras hadin is obligatory for the chassid, and he is required to act accordingly. Thus, for the chassid Rabi Yehoshua ben Levi it would not just have been acting lifnim mishuras hadin not to hand over the fellow; it was the halachah. He was required not to hand him over, because in Mishnas Chassidim, the “Shulchan Aruch” of a chassid, the din obligated that.

This concept can be found in the words of the Rambam as well (Hilchos Melachim 5:9), where he writes that it is permissible to leave Eretz Yisrael under certain circumstances if there is no food. “V’af al pi shemutar latzies, einah middas chassidus, sheharei Machlon v’Chilyon shnei Gedolei Hador hayu, mipnei tzarah gedolah yatzu, v’nischaivei kliyah laMakom — Although it is permissible to leave, nevertheless it is not the manner of chassidus. For Machlon and Kilyon, two of the Gedolim of their generation, went out and they were subject to annihilation.”

Although leaving Eretz Yisrael during a time of hunger is proscribed only under the constraints of middas chassidus and is not forbidden mei’ikar hadin, it brought about a death sentence for Machlon and Kilyon. If it is not really prohibited, why was the punishment for not “going the extra mile” so serious as to bring about their annihilation?

We see from this Rambam what we have also learned from the words of the Yerushalmi. Although there are actions that are not required for regular people, for a person who is on a higher madreigah and in the category of chassid, they are obligatory and considered mei’ikar hadin. The Mishnas Chassidim rules that a chassid is required to be stringent in such matters. For this reason, for Gedolei Hador like Machlon and Kilyon, who were on that level, the obligation not to leave Eretz Yisrael was mandatory and their leaving indeed brought about their deaths.

Why is this so? What is it about a chassid that transforms a practice from being lifnim mishuras hadin into halachah? The answer is that a person who is on a higher madreigah is in the beis haMelech, he is in the King’s palace, and the behavior in the inner sanctum of the Melech Malchei Hamelachim has to be different. Imagine if a person would spit on the floor in front of a king. This may just be considered bad manners if done in a mundane place, but if it is done in the palace in front of the king, it is debasing the honor of the king and cannot be tolerated.

A chassid is constantly in front of the King. Wherever he may find himself, his madreigah is that of being in the beis haMelech. For this reason, actions that may not be offensive if done by regular people, take on a whole different meaning if done by the chassid, and he is required to act accordingly.

Reaching the level of Machlon and Kilyon, or Rabi Yehoshua ben Levi, takes a lifetime of avodas Hashem. Yet during Aseres Yemei Teshuvah, each and every person is in front of the King. After all, it says “Dirshu Hashem b’himatzo … — seek Hashem when He is found …” (Yeshayah 55:6) and the Gemara in Rosh Hashanah (18a) tells us that this refers to Aseres Yemei Teshuvah, when we are closer to Hashem. Being in the proximity of the King obligates us to behave differently, and we are thus all in the category of chassid, for whom the Mishnas Chassidim applies, at that time.

This can help us understand the words of the Tur. Being stringent in the halachah of pas palter is not done as a way of performing teshuvah. If that were the case, the transformation would require a more permanent change. Refraining from pas palter during this time is because we are now chassidim, we are in front of the King and must behave in a different manner. Thus, we must observe Mishnas Chassidim and accept the stringencies of the prohibition of pas palter that go along with it during that time.

The Gra tells us that being in the palace of the King during Aseres Yemei Teshuvah has its advantages as well. Although it obligates us to be more strict in our observance, it also grants us an audience with Hakadosh Baruch Hu and our tefillos are more readily accepted.

Although the Tur speaks about the limitation of being stringent about pas palter to Aseres Yemei Teshuvah, we must realize that we have the ability to extend our presence in the King’s palace beyond those few days. As we see from the words of Rashi on the passuk about Shemini Atzeres, Hashem longs for us to remain in His presence and He even gave us the Yom Tov of Shemini Atzeres as a means of extending our stay: “Kasheh Alai pridaschem — Your parting is difficult for Me,” Hashem tells us. He wants us to remain so He can grant us the ability to bask in His glory and so, on Shemini Atzeres, we are granted an extension of our audience with the Ribbono shel Olam.

Let us make the most of this time that we have in close proximity to Hashem and use it to daven for all our needs and for the revelation of the Shechinah with the coming of Moshiach Tzidkeinu, b’meheirah b’yameinu, amen.