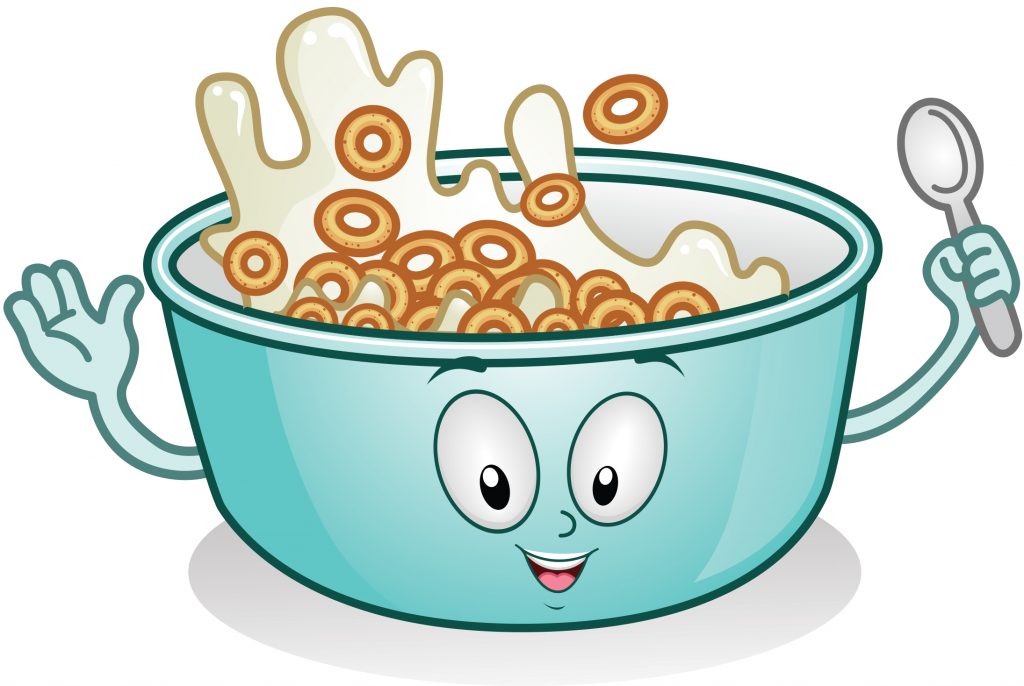 One of the most difficult decisions every parent has to make, on a regular basis, is what kind of cereal to buy. It seems pretty trivial, but it’s a very regular basis, because your children tend to go through cereal at an alarming rate.

And this doesn’t seem possible. You make chicken two nights in a row, and everyone complains. But your kids can cheerfully eat the same cereal every day of their lives. As long as it’s not one of the ones you like.

Plus, they eat cereal between meals. In fact, according to statistics that I just now made up based on some of the people I know, cereal is more popular at midnight than it is for breakfast.

“Breakfast? Who has time to eat breakfast? Besides, I just had this at midnight!”

And forget bowls — kids are just sneaking into the kitchen and grabbing handfuls of cereal out of the box all day, and then at supper time they say they’re not hungry. The manufacturers do try to help you out by making the interior bags as noisy as possible, but your kids have figured out how to take cereal silently by doing such things as not bothering to close the bag after breakfast.

So here’s an idea: Why not buy a cereal they don’t like? That’ll last. But of course you don’t want to do that, because what’s the point of buying something they won’t eat? Especially this close to Pesach.

Or you can just buy Pesach cereal! That’ll show them.

Who even gives them the right to decide that there’s a cereal they don’t like? I say there’s too much variety out there. There are more varieties of cereal than basically any other kind of food. Cereal became a popular breakfast food in the first place because people didn’t want to have to think about what to eat in the mornings — they just wanted to grab something quick so they could eat and drink at the same time and then get out the door.

In fact, cereal was probably invented by accident. I know that when I’m making coffee, which I usually do before I’ve had my coffee (this is the worst time to make coffee), I sometimes accidentally use juice instead of milk or put coffee grounds on my cereal or butter my phone, and I’m pretty sure this is how cereal was invented as well. Someone had a bowl of cookies or chocolate or whatever, and he accidentally poured in a full cup of milk, and said, “Hey! This is pretty good! Ma, is this healthy?” And his mother, who had not had her coffee yet, said, “Okay. Whatever. Go to school.”

Point is, it was invented to avoid having to think in the morning, and now there are so many choices that we have to think. Unless we have a rule like, “You can’t open a second box until the first box is finished.”

Wait. Is that why they plow through the first box so quickly?

So what are your other options? You’re not going to suddenly stop buying cereal, because all day your kids keep asking what they should eat: “What should I take for snack?” “What should I have for lunch?” “I don’t like what you’re making for supper. What should I eat instead?” And you don’t need them asking you this in the morning before you’re even up. You’re just glad there’s a way to trick your kid into getting some milk into his system.

You know, for people who prefer milchigs, they sure don’t drink a lot of milk.

Plus, there’s always something to do on the back of the box, such as a game, or — in the case of heimishe brands — an instructional on how to perform emergency first aid during breakfast. That wakes you up.

What other food provides entertainment right on the box? Usually they just print recipes. And no one keeps those boxes around to read while they’re eating it either. When I make something, I usually throw away the box immediately, and then again after I fish it out of the trash to check the cooking times.

Come to think of it, though, there probably should be preparation instructions on the side of the cereal box, so we can finally settle that argument about what we’re supposed to be pouring first — the milk or the cereal.

Most of us pour the cereal first, like our fathers before us, and then we pour the milk in straight through the cereal and wonder why it’s getting soggy so fast. What we should be doing, scientifically, is pouring the milk in first, and then the cereal, so that not even all the cereal touches the milk. Just the bottom pieces do. And then we should somehow eat those first. I don’t have it all thought out yet.

Or we can have a bowl of just milk, and then every few minutes we’d dump a handful of cereal in there, eat it, and then dump in another handful until the whole box is finished, probably. I knew a guy in yeshivah who did this. Everyone made fun of him, but he couldn’t hear them over the crunching.

So the best idea is to do what the yeshivos do. Yeshivah food has never really been what you’d call “good,” ever since the old days, when your grandfather used to get bread and water, except on the days that he just got water. And it wasn’t even filtered. The bachurim had to filter the water themselves, using a sock from the dorm.

And this is still what yeshivos do today, except for the sock: They put out food that the kids don’t love, but they’ll eat if they have no other choice. Remember they have to feed hundreds of bachurim, and you know how bachurim eat when it’s a food that they like. The yeshivah doesn’t want to have to spend your entire tuition on a meal plan.

And they don’t do this just with lunches and suppers — they do the same thing with whatever cereals they buy. Which is why the kids all bring their own boxes, which you buy. So basically, the yeshivos are winning.

My point is that you should do the same thing, at least when it comes to cereal, because, let’s face it — even your 5-year-old eats cereal like a yeshivah bachur: 3-4 times a day, often while standing, and usually while staring vaguely into the distance.

So the key is to buy a meh kind of cereal, like Cheerios. Nobody loves Cheerios. It’s the ultimate compromise cereal. Everyone says, “Okay, I’ll eat it.” And their parents say, “Okay, you can eat it. Make sure to throw some chopped fruit on it, like in the picture.”

Not one person does that.

I actually tried it once, and it’s not as good as it looks. Bananas do not absorb milk.

The problem is finding that one cereal none of your kids particularly like but that none of them specifically dislike. And everyone has different tastes. Every time you buy a cereal one kid doesn’t like, the other kids jump all over it. You have to take all your kids to the supermarket in one trip.

You can probably buy corn flakes. Everyone will eat corn flakes, and if they don’t like it, they can turn it into frosted flakes by dumping in a ton of sugar. But no one’s going to nosh on handfuls of corn flakes all day, nor are they pouring sugar into their hand to eat it with. They could put the corn flakes on chicken if they want, but then you win!

Rice Krispies is a good cereal for this too, because number one, it’s not actually chametz gamur, and #2, if you don’t want to sell it, you can make it into Rice Krispies treats. You can’t make Cheerios treats. You can make something called Chex mix, but I think you have to buy pretzels for that, which is a step in the wrong direction.

So that’s the plan — Cheerios, Corn Flakes, and Rice Krispies. Or what is known in Yiddishkeit as “weekday cereals.” You can still buy a limited amount of sweetened cereals, and those would be for Shabbos, so the kids will eat them only on the one day a week when they have no real way to get out their energy, and then bounce off the walls while you’re trying to get them to sit down for cholent.

See? I never understood the concept of Shabbos cereals growing up, but I eventually came around.

What do non-Jews do?

Of course, my biggest problem with the concept of Shabbos cereals was always that most of us don’t eat cereal on Shabbos. When would we work it in? In the chicken soup? In the cholent? Try those and let me know!

Hey, no one thought they would be good in milk either!

I can tell you they’re okay in coffee.