FromINYAN Article In the Genes: Past and Future Intertwined 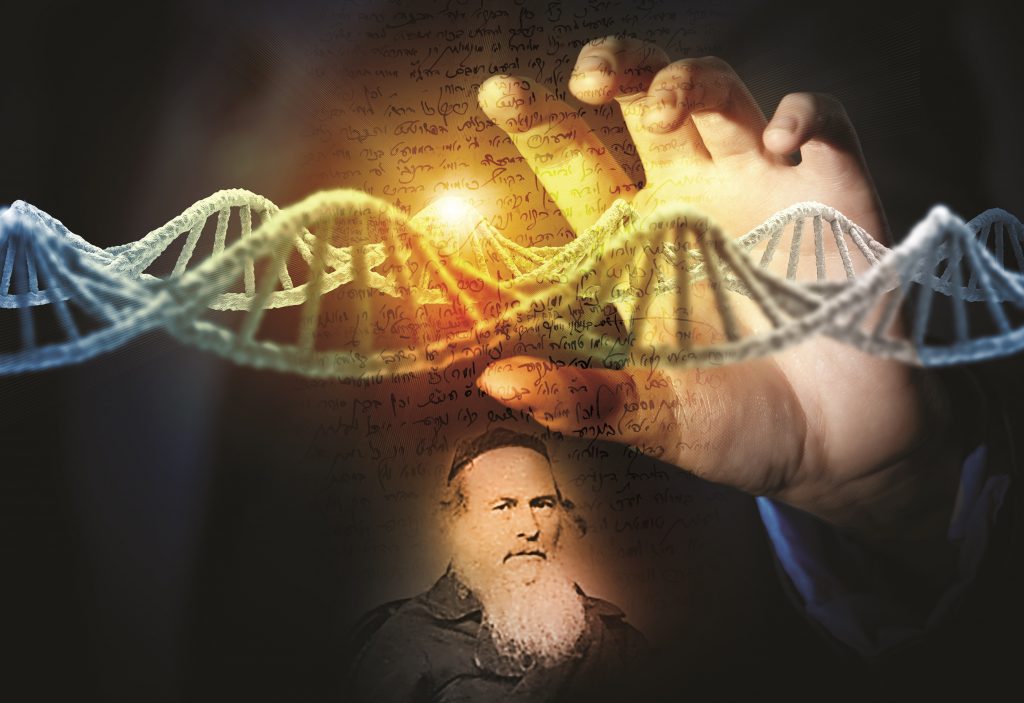 The storm raged as torrents of rain cascaded down from the sky. Rabbi Yonason Bleier left his office and retired for the night, expecting to return to continue with his work the next day when the turbulent weather subsided.

When Rabbi Bleier entered his office, he immediately sensed that something was amiss. The moisture in the air was a telltale sign that the room had filled with water, and there was certainly going to be some damage. As soon as he surveyed the scene, his face fell. The storm had caused a pipe to burst. He caught a glimpse of water pooled near his computer. Years of work were stored on it and he feared the worst.

For several years, Rabbi Bleier had been working on publishing old sefarim from the 1500s and 1600s in an updated format. Through his publishing company, Machon Zichron Aharon, dozens of sefarim of that bygone era had been brought back to life — typeset in an up-to-date style with hundreds of corrections and annotations — and were appreciated by the thousands who took up their study. In addition, Machon Zichron Aharon reprinted many of the 80 Midrashim with their commentaries, an ongoing project which has made them accessible to talmidei chachamim worldwide. Rabbi Bleier’s love of sefarim then led him to develop yet another division in his publishing enterprise as he undertook the challenge of printing unpublished manuscripts of Gedolei Torah of past generations.

One such project was to republish the works of Harav Avraham Shaag, the Rav of Kobersdorf and one of the premier talmidim of the Chasam Sofer. As a Rav in a European city nearly two centuries ago, Rav Avraham delivered many drashos, which were originally printed as Sefer Drashos Harash in 5664/1904. Additional drashos, which were distributed amongst several of his descendants, had recently come to light, and Machon Zichron Aharon was interested in reprinting the sefer with the inclusion of the previously unpublished material.

Rav Avraham was born on 4 Iyar, 5561/1801, in Freistadt, Hungary. His father, Harav Yehuda Leib Zwebner, was one of the foremost talmidim of the Noda B’Yehudah, Harav Yechezkel Landau of Prague. When the Noda B’Yehudah conveyed semichah on his beloved talmid, he wrote, “Aryeh shaag mi lo yira — a lion roars; who is not afraid” (Amos 3:8). From then on, Rav Yehudah Leib was referred to as Shaag.

Rav Avraham’s early life was fraught with misfortune, as he was orphaned of his illustrious father before the age of four. His mother then sent him to learn by Harav Yitzchak Frankel of Roggendorf until the age of ten. By that time he was knowledgeable in most of Shas, and he entered the yeshivah of the Chasam Sofer in Pressburg, who became his main Rebbi. In time, the Chasam Sofer reportedly remarked, “There is no greater talmid chacham than Rav Avraham within 200 kilometers!”

In 5587/1827, Rav Avraham was appointed to the rabbanus of Prustitz in place of his deceased father-in-law. He served there for seven years. In 5594/1834, when he was not yet 25, he was chosen to be the Rav of Schottelsdorf, Hungary, where he opened a yeshivah. When Rav Avraham would say his six-hour shiur there, he would remain standing the whole time, a practice he maintained into his old age.

In 5608/1848, he assumed his next position as Rav of Kobersdorf (Kabold), one of the Sheva Kehillos (Siebengemeinden/Seven Communities) located in the Austrian Burgenland. Rav Avraham served there for 25 years, and thereafter was referred to as the Rav of Kobersdorf. He was recognized as one of the leaders of the Yidden of Oberland (the highlands of the Austro-Hungarian Empire, which included Austria, Czechoslovakia and part of Hungary) and took a leading role in combating the Neolog movement, advocating that the Orthodox community officially separate from them.

In 5633/1873, he ascended to Eretz Yisrael together with his close talmid, Harav Yosef Chaim Sonnenfeld, who eventually became the Rav of Yerushalayim. Rav Yosef Chaim was so attached to his Rebbi that before they embarked on their trip, he trained to be a shochet so he could provide Rav Avraham with meat during their travels.

After his arrival on 21 Iyar, Rav Avraham once again gave shiurim for talmidim despite his advanced age. On Friday before Rosh Chodesh Nissan, 5636/1876, Rav Avraham uncharacteristically ended his shiur by saying, “Mir vet dah endegin — we will end here.” Rav Yosef Chaim was alarmed by this and fasted the entire Friday. On Shabbos morning, Rav Avraham was niftar. He was buried on Har Hazeisim.

In the middle of the work on the manuscript of Rav Avraham’s drashos, the Machon realized that the drashos began with the year 5592/1832, despite the fact that Rav Avraham had begun his rabbanus in Schottelsdorf in 5687/1827. The gap of five years with no drashos seemed to be a terrible loss, but seeing no recourse, Machon Zichron Aharon forged ahead with the work.

As the project neared completion and just days before it was to be submitted to print, Rabbi Bleier received a call from an individual who informed him that he had a manuscript of Harav Doniel Proistitz. Rav Doniel was the mechaber of the Sefer Machaneh Dan on Maseches Pesachim and served as the Av Beis Din of Pressburg for 50 years, including the time when the Chasam Sofer was the Rav of the city. Rabbi Bleier was excited to see the kesavim of this towering Gadol and paid the fellow a visit.

As he pored through the writings, he noticed several pages that seemed out of place. They were in a different handwriting, so they were obviously not written by Rav Doniel Proistitz, yet they looked awfully familiar. Upon closer examination, Rabbi Bleier realized that these were the missing pages of the drashos of Harav Avraham Shaag, who was a contemporary of Harav Doniel Proistitz. It seemed as if Rav Avraham was guiding them from Above in order to enable them to print his sefer.

This find was miraculous on its own, but the miracles were just beginning. With much toil and effort, the Machon completed the publication of the Sefer Drashos Harash and was on to its next project, republishing the chiddushim and teshuvos of Harav Avraham Shaag.

Besides for his drashos, Rav Avraham wrote many teshuvos to those who sought his opinion. These were published posthumously as Shu”t Ohel Avraham in Yerushalayim in 5641/1881. His chiddushim on Maseches Chullin were published in Yerushalayim as well in 5651/1891. Rabbi Bleier discovered that some of Rav Avraham’s descendants had some unpublished chiddushim, which they offered to Rabbi Bleier for publication. Rabbi Bleier set about preparing these writings for an expanded and updated version of Rav Avraham’s chiddushim on Shas, Chiddushei Rabbeinu Avraham Shaag, which would be a three-volume set that would incorporate the Shu”t Ohel Avraham together with the newly found manuscripts.

Shortly before they were ready to go to print, the Machon became aware that Avigdor Shaag, an elderly fifth-generation great-grandson of Rav Avraham, had some additional kisvei yad (handwritten manuscripts) belonging to his illustrious ancestor. When they visited him in his home in the Zichron Moshe neighborhood in Yerushalayim, Avigdor was excited to hear about the project and gave the Machon some 150 pages of chiddushim that were in his possession. After handing them over, he said solemnly, “For five generations, these kesavim were in my family’s possession. My father had requested that I print them, but I have not done it to date. Please, take them and publish them. With that accomplished, I will feel I have completed my shlichus and I can rest comfortably.” Avigdor Shaag passed away a few days later.

Rabbi Bleier and his staff were beginning to feel that Harav Avraham Shaag was orchestrating the publication of his chiddushim in the upper spheres. The Machon set out to reprint the three-volume set of Chiddushei Rabbeinu Avraham Shaag, which would incorporate the Shu”t Ohel Avraham, Ohel Avraham on Maseches Chullin, and the newly found chiddushim from the kisvei yad.