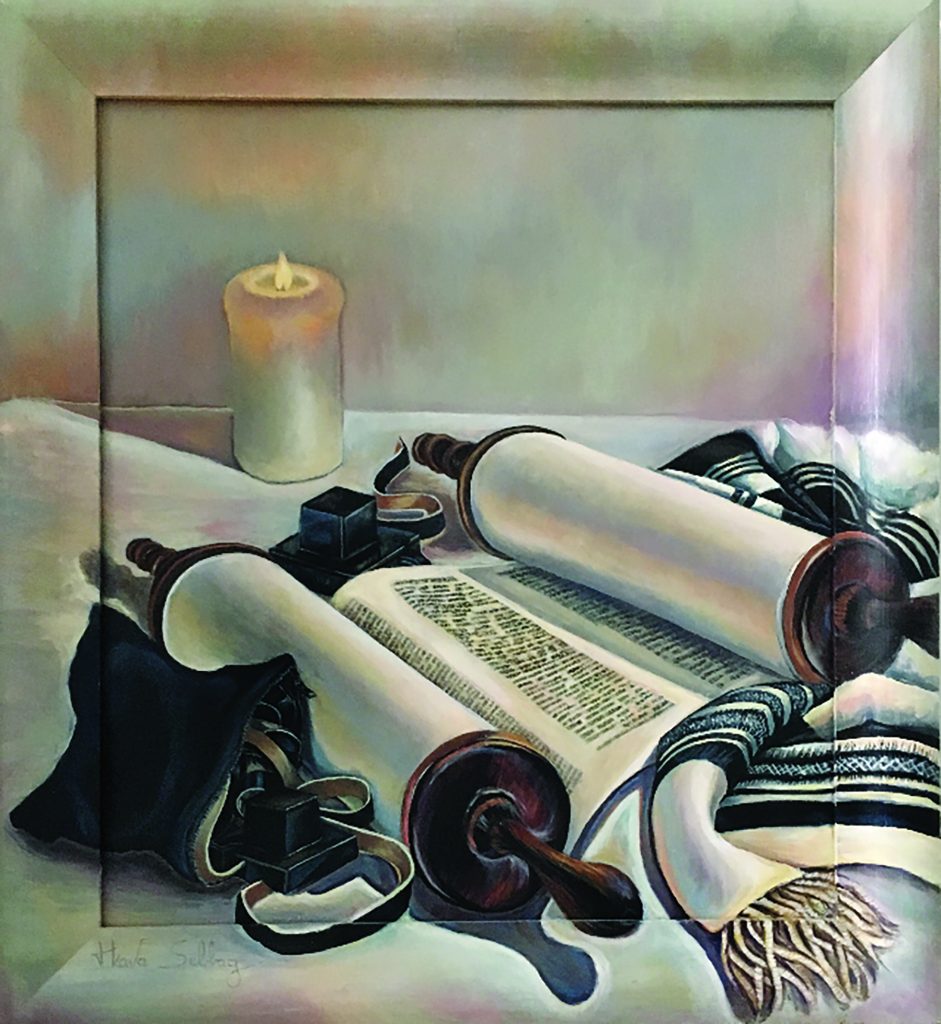 Her Journeys From France to Eretz Yisrael, Gibraltar and London

Artist Hava Sebbag (née Fhima) has led an interesting life in several parts of the world. She was born in the small French town of Colmar near the Swiss border, in a very yekkish, traditional community consisting of 800 – 1,000 Jews.

When Hava was only 8 years old, her father was niftar, and she was raised together with her five siblings by their hard-working single mother.

From an early age, Hava exhibited artistic ability and an impressive eye for detail. After visiting her cousins who enjoyed drawing and painting, Hava took art lessons and her future career was launched. Her mother was always proud of her, constantly encouraging Hava’s talent.

As there was no Jewish school in Colmar, at the age of 14, Hava left on her own to attend a boarding school in Yerushalayim. She regarded it as a great adventure and felt happy to be studying among Jewish people. During a math class one day, her teacher noticed her drawing and suggested she take art lessons with art teacher Bitya Gefen. Hava fondly recalls her mother visiting from France with a package containing a wide variety of high-quality pencils and colors.

Her gratitude brought her to tears. “I davened that Hashem would always help me in this path,” she recalls.

Hava particularly enjoyed drawing portraits and would display them on the walls of her dorm room. Other pictures came from her imagination, including many black-and-white pencil drawings. The art lessons with Bitya Gefen continued every week for over four years. Later, Hava further developed her artistic talents under the guidance of well-known painter Yossi Rosenstein.

When her mother left France and came to join her, they settled in the Har Nof area of Yerushalayim. Hava attended the large Bais Yaakov High School in Romema while continuing her artwork. Soon, many of her paintings graced the walls of their new home.

Hava’s father was not often spoken about at home, as the family found his loss too painful. However, at age 18, Hava decided to express her emotions by painting a portrait of her father for his tenth yahrtzeit. When she presented it to her mother, it was clear just how moved and comforted she was by this beautiful replica of her late husband.

The Sebbag family then relocated to the Jewish community on the small island of Gibraltar, near Spain. Hava still has fond memories of this warm, welcoming community where she taught art as well as Jewish subjects. However, as their children grew older, the Sebbags realized the need to move again for the sake of their children’s chinuch. Rabbi Sebbag became a Rebbi in Menorah Grammar School and the Rav of a community in London, England.

At first, Hava found London to be a great culture shock after the years in Eretz Yisrael and Gibraltar. English life took getting used to, and adjusting to a very large community where nobody knew her was difficult. Once again, she immersed herself in her artwork, painting, giving art lessons and inspiring hundreds of students over the years. Determined to use her talents to encourage others, she went on to establish a name for herself and eventually taught the children of her students.

While raising young children, Hava realized she needed to be very self-disciplined, painting only when they were asleep at night or at school during the day.

“I often painted until the last minute before going to pick them up from school,” she recalls with a smile.

Now that her youngest child is 14, she has a more flexible schedule and much more time to devote exclusively to her artwork.

Asked where she obtains her inspiration, Hava describes the positive impact she derives from the many portraits of renowned Gedolim in her home, as she wanted her children to literally look up to the wise, holy faces of the great Rabbanim for emulation.

She claims she doesn’t have a favorite painting but fondly recalls her portrait of Harav Moshe Feinstein, zt”l, which incidentally was sold on the day of his yahrtzeit.

“It takes a long time to paint a realistic portrait, generally three to four months, but it could take even longer,” she comments.

Hava also enjoys bringing to life beautiful landscapes and seascapes as well as finding deep messages in simple still-lives, viewing them all as gifts from Hashem.

Hava has utilized different art media and techniques over the years, ranging from acrylic and pencil to her favorite oil paint. She has painted on traditional canvas, textured wood panels and is currently working on metal.

“For portraits, metal is more conducive to producing finer details,” she points out.

She finds her students today are eager to express themselves through various types of art, often choosing medium and style they can most relate to.

“I define my art as contemporary fine art leaning towards realism and sometimes surrealism,” she explains, “such as the one I painted of the Kosel and a rose, which is symbolic of the Jewish people.”

Hava can equally capture beauty in a still life of a silver Havdalah set, or of one of the gracefully curved bridges in Venice; in paintings of people in varied landscapes, such as a man in a tallis, davening on an empty beach, or two children scampering down a sun-filled street in the south of France.

“I am very grateful to Hashem for giving me this special gift. My pictures give inspiration to others and I appreciate the positive feedback I receive from my clients,” concludes Hava.

In addition to private sales and commissions, Hava has hosted exhibitions of her artwork for tzedakah projects. She may be contacted via Hamodia.