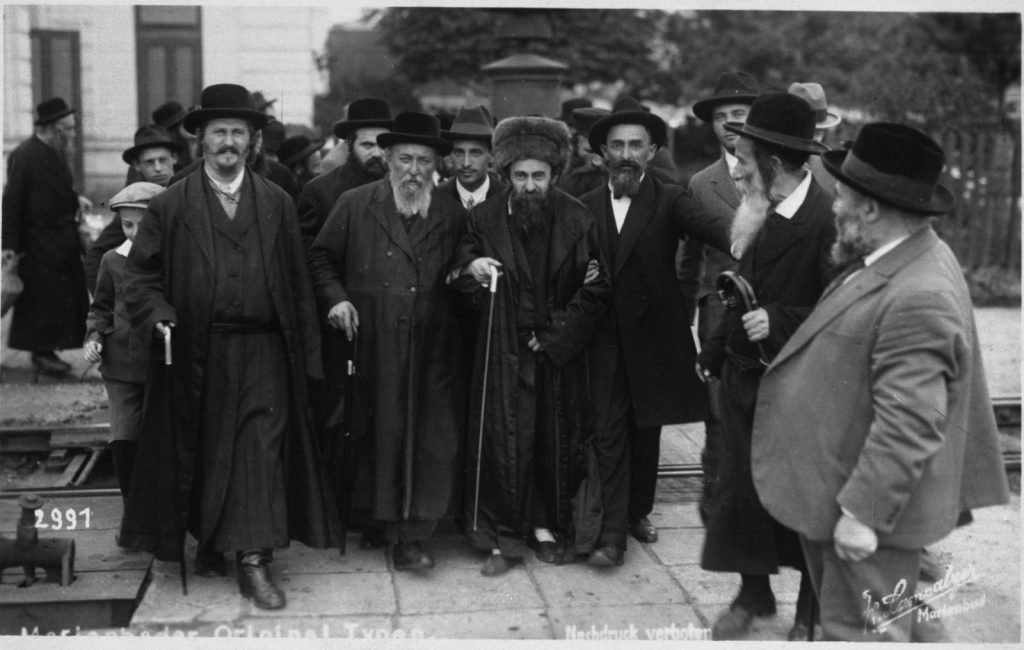 The darkness and hester panim engulfed at least six million of Klal Yisrael. But there were rays of light that shone through. Stories have emerged of individuals guided and protected by an unseen Hand that plucked them from the burning fire and brought them to safety against all odds.

This epic story describes the journey of one man out of the Valley of Death.

Mr. Chaim Arye (Kurt) Leitner, z”l, was brought up in the Czechoslovakian town of Marienbad. Between the two World Wars, Marienbad was an elegant and popular spa town renowned for its therapeutic qualities. The Leitner family owned and ran the Hotel National and the Goldenes Schloss (Golden Castle) Hotel in Marienbad. Many great tzaddikim came to the town every summer to benefit from the calm atmosphere and spa waters.

The Leitner children were brought up following the strict traditions of their parents. Kurt trained in hotel management and in 1934 spent six weeks managing a hotel in Eretz Yisrael. On several occasions, he was offered a permanent visa to stay there, but he chose to return to Marienbad.

Eventually, Kurt took over management of the hotel. He had the honor of being chosen as the organizing secretary in charge of arranging the third Knessiah Gedolah in 1937. He also had an excellent relationship with the non-Jewish town officials, who respected his honest and sincere conduct. It was probably this reputation that saved his life.

In 1938 Germany was persecuting its Jews and expanding its power abroad. Germany annexed Austria and soon started to press claims on the Sudetenland, an area of Czechoslovakia with a predominantly ethnic German population.

During the early autumn, while eating lunch in the hotel dining room, the Leitner family received an unexpected visitor. The local police chief had come to warn the family, as he greatly admired them and felt obliged to help them. He had received secret information that certain Jewish citizens were soon to be arrested and, unfortunately, he could guarantee their safety no longer. After offering to provide an escort to the edge of Marienbad he left the hotel.

The family was dismayed and shocked. Although they found it difficult to leave behind their entire world, they realized that time was short. They hurriedly packed a few belongings and then escaped to Prague, the capital of Czechoslovakia. In Prague, the family separated. As it was almost Sukkos, Kurt decided to travel to Belz for Yom Tov. He stayed in the Belzer hoif and was warmly welcomed by the Belzer Rebbe, Rav Aharon, zy”a. For many years, Rav Aharon had enjoyed the facilities of Hotel National and the hachnasas orchim of the Leitner family, and he was eager to repay a debt of hakaras hatov to Kurt. During Yom Tov, Kurt attended the tischen of the Rebbe. Rav Aharon made sure his guest felt comfortable and advised him to follow his family minhag and don tefillin during Chol Hamoed in the privacy of his own room.

At the end of Yom Tov, in an effort to escape, Kurt was ready to leave the exalted atmosphere that surrounded the Rebbe. Before escaping, he entered the presence of Rav Aharon to take his leave. When he heard of Kurt’s plans, the Rebbe cryptically advised him not to leave the town yet, telling him, “Shabbos Bereishis is part of the Yom Tov!” After enjoying Shabbos, Kurt returned again to the Rebbe. This time, the Rebbe gave him a brachah that he should be safe and advised him that his family, including his father and sister, should all travel together. Then the Rebbe gave Kurt a Czech coin as a shemirah — safeguarding. Kurt thanked the Rebbe profusely and set out on his journey.

For several months, Kurt stayed in a Jewish hotel in Northern Slovakia. As the Nazis intensified their grip on the countries under their control, Kurt became more apprehensive. Finally, on March 16, 1939, the blow fell. Someone came rushing into the hotel to show Kurt a copy of the notorious newspaper Der Sturmer. The front page featured a picture of Kurt Leitner, sought by the Gestapo because he had organized a meeting of many Rabbis in Marienbad. Immediately, Kurt fled for his life. He was now a wanted man who could expect no mercy if caught. Every couple of days, he changed his residence to avoid attracting attention, as he desperately searched for a way to escape to neighboring Poland.

Time was running out. The world was preparing for the inevitable war and Kurt was on the list of wanted men. Kurt’s father and sister were still living in Prague and encouraged him to attempt to escape. Kurt contacted them and told them that the Belzer Rebbe had advised them to travel together, but his father felt that would be too dangerous and refused to join his son.

Kurt made his way to Mahrisch-Ostrau, a town near Czechoslovakia’s border with Poland. Freedom and comparative safety were closer than ten miles away in Poland, but how was he going to smuggle himself across the border?

He went to the local train station and tried to blend in with the crowds waiting on the platform. The station was full of people anxious to catch the train. More threatening were the Nazi “Brown Shirts” filling the station who were also traveling. Kurt knew that his face and clothing identified him as a Jew, as he refused to shave even though that would have made him less conspicuous. He retreated into the waiting room and faced the wall, trying to think of his next move. He had taken the coin the Belzer Rebbe had given him and fixed it on a chain around his neck. He felt the shemirah coin with his fingers and remembered the Rebbe’s parting words.

His thoughts were suddenly interrupted by a man who approached him quietly. The man appeared to be a Polish worker and was dressed in the uniform of a train driver. As he observed Kurt carefully, Kurt started to feel uncomfortable. Then the stranger asked, “Where do you want to go?” Kurt was not sure how to respond. Doubts filled his mind. Could this man be trusted? He answered non-committedly, “What have you got to offer?”

The train driver explained briefly that he drove trains full of coal from the Polish coal mines to fuel the huge industrial steel foundries in Mahrisch-Ostrau. After unloading the coal in the wagons, he drove the empty wagons back to Poland. He was prepared to give Kurt a ride into Poland.

Kurt decided he did not have much to lose by explaining his predicament, as the man seemed genuinely concerned about his welfare. Kurt explained that he needed to leave the country as he was being targeted by the Gestapo. The man told him to stay in the waiting room and left. Kurt waited for several tense minutes, wondering if the train driver would indeed return. Eventually, the man returned, carrying a set of heavy worker’s clothes he obtained from a store-room in the station. Silently, Kurt put on the protective clothing and followed the man outside onto the platform.

The two men pushed their way through the crowds. No one gave them a second look as they appeared to be rail employees making their way to the front of the coal train. Kurt hurried to keep up with the driver. When they reached the steam engine at the front, the worker stepped onto the metal footplate and swung himself up into the driver’s cab. Kurt followed and found himself standing close to a mass of pipes and controls.

The man gave Kurt a coal shovel and told him to start shoveling coal onto the fire before the train started. Kurt looked around. Behind the engine was a large half-full coal tender. The coal was needed to fuel the fire in the depths of the engine. The fire boiled the tank of water to produce steam that drove the huge wheels of the train. Kurt started to throw coal onto the fire, and soon steam was hissing out from the engine. The worker pulled a cord and the steam whistle emitted a loud noise to warn the crowds on the platform to stand clear. He opened a valve and, with much noise, the train started to move out of the station.

The coal train had many cars and it took some time to build up momentum. Gradually, the train gathered speed, passing rows of streets, houses and gardens. After some time, the train left the town behind and continued along miles of railway track through the countryside. Kurt felt the rush of cool air on his face as the train chugged along. He continued to pile coal onto the fire, as the other man adjusted the many steam controls. At one point, the driver looked at Kurt and announced that they had just crossed the border into Poland. Kurt breathed a sigh of relief. Though a few short months later Poland would also be invaded by the Nazis, for the moment he was safe.

The entire journey took an hour and a half. As they entered the Polish town that was to be their destination, the train slowed down as it approached the station. Kurt was overcome with gratitude to the train driver who brushed aside his thanks and suggested they share a taxi from the station. Kurt would need a taxi to continue his journey and the man asked to be dropped off near where he lived. The man spoke Polish to the taxi driver, giving him the address. Before the man got out, Kurt thanked him profusely once again and asked him to write down his address.

Kurt stayed briefly in the town, intending to continue to Belz in Western Ukraine, near the eastern Polish border, about 360 miles away. Before leaving, he went to the local post office to send a telegram to his father in Prague. He wired him the contact details of the train driver so that he could escape the same way. Having sent the telegram, he set out to Belz.

Once out of Czechoslovakia, Kurt felt safe and looked forward to seeing the Rebbe again. However, one thing puzzled him. He had received a telegram from his father informing him that he had urgently tried to contact the train driver and sent a telegram to the contact address that Kurt had sent him. A few hours later, he received notification from the post office that the message was undeliverable. The name of the person and his address did not exist. Kurt was greatly saddened to think that his father would not be able to follow his escape route.

When Kurt arrived in Belz, he went straight to the Rebbe. Rav Aharon was very happy to see him and inquired about the details of his escape. The Rebbe listened carefully. When Kurt finished his account, including the fact that his father had unsuccessfully tried to reach the Polish worker, the Rebbe commented that it was a shame his father had not agreed to accompany his son as the Rebbe had originally suggested. Then the Rebbe asked, “Do you know why your father could not contact that Polish train driver? It was because that man does not really exist. He was none other than Eliyahu HaNavi sent to rescue Yidden. That does not happen every time.”

Soon afterward, Kurt left Belz and successfully managed to reach England just before the outbreak of the war. Unfortunately, his father and sister were trapped in Czechoslovakia by the Nazi invasion in March 1939. They were both deported to concentration camps where they tragically perished.

Mr. Kurt Leitner traveled extensively across the world before settling in Manchester, England. He was truly one of the “brands plucked out of the burning fire” by the Heavenly intervention of Eliyahu HaNavi.

Details of this account have been taken from the book Marienbad & Beyond, by Dovid Leitner..