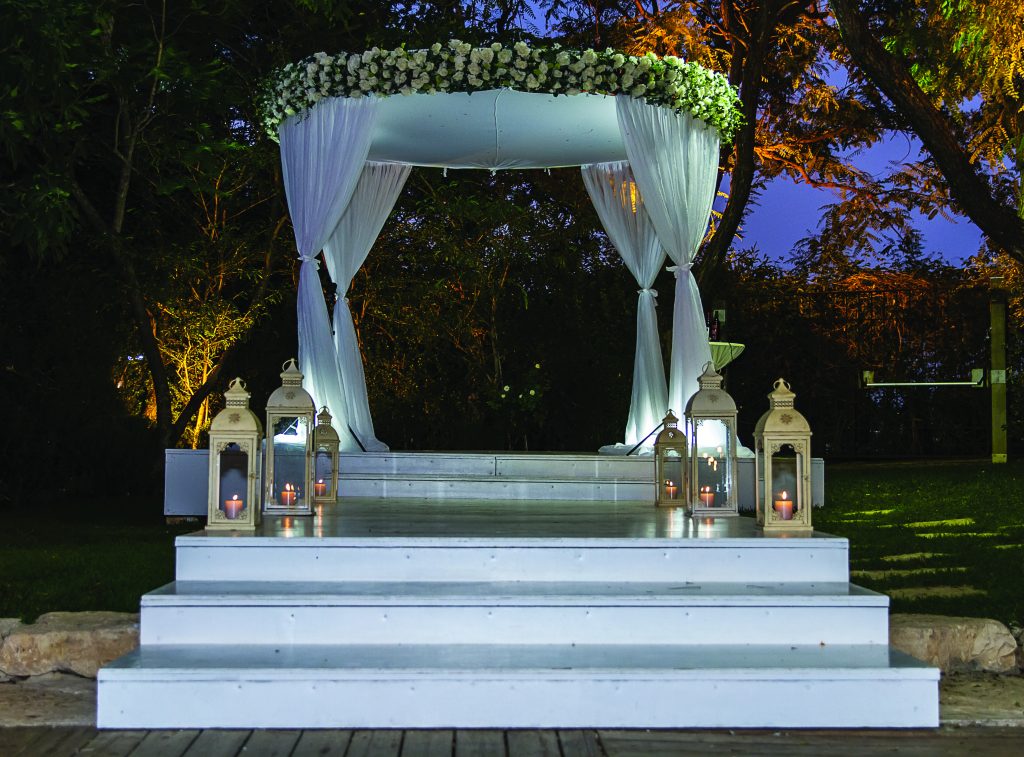 I am awaiting the chasunah of my first grandchild and, at the time of this writing, have no idea where and when it will be. What I do know is that it will be exactly when Hashem decrees it to be, and I pray that it will be celebrated without agmas nefesh. I daven that it be a binyan adei ad, and that the couple be zocheh to build a bayis ne’eman b’Yisrael. All the rest, I realize, is mere details. It is true I had expectations of what this momentous event would look like, and I am sure that I will be pleasantly surprised with the reality.

Since the coronavirus situation intensified, many people have scrambled,rescheduled and downsized their family simchos. Others have decided to postpone events for a future date so that elderly relatives may attend or for other personal reasons. Normal pre-simchah stress levels have escalated as people attempt to make heads or tails of their altered plans. Hear it from the players themselves as they share the incredible emotional upheavel they experienced while persevering with their challenges with focus, emunah and bitachon.

Rikky* is the oldest child in her family. She has been planning her wedding down to the last detail for a long time. “I was eager to share my big day with friends and family and had great expectations of what it would look like. Enter corona and all my plans were upended. I was devastated. My friends and extended family would not be able to attend and the beautiful hall where it was supposed to be canceled on us.

“Every day a new venue was chosen and then the next day it changed. This confusion was disturbing and many tears were shed. The situation was made tolerable only because of my support system: my parents and future mother-in-law, who held my hand throughout the turbulent days. Everyone was determined to make the best of the situation, although we were all affected by the changes in the simchah.

“Finally, the wedding was celebrated in a close friend’s backyard in Philadelphia. The chuppah was set under a blue sky, a white trellis decorated with white flowers, and accompanied by the harmony of voices joined in song. The meal, though informal, was joyous and was followed by dancing on the grass in the backyard. Aside from a dirty hemline on my gown, the dancing was fun and leibedig.

“If I had to do it all over again, I would,” concludes Rikki. “Priorities change and I realize that it is really all about getting married and building a home of Torah and mitzvos.”

Chanie*, a mother of 10, bli ayin hara, and a grandmother many times over, baruch Hashem, was planning the bar mitzvah of her baby for the past year. “My married children and all my grandchildren were looking forward to celebrating this major milestone together with us. Hashem had a different plan, and it was set into motion by the restrictions of the coronavirus rules. First the hall canceled, then the makeup and hair ladies. The florist, however, agreed to come and set up before anyone showed up. The numbers of attendees began to dwindle and the kiddush, for which all was already prepared, including a large pot of cholent, was canceled.

“My children arrived for Shabbos, most without their spouses and sans offspring. In spite of this, the family experienced a beautifully intimate and uplifting Shabbos together, bonding with song and divrei Torah. We had our own minyan, made up of sons and son-in-law, and we davened together. It was the first time I heard a son be oleh on the morning of the bar mitzvah and my husband say ‘Baruch shepitrani.’

“The morning of the bo b’yom, my daughter, an amateur photographer, snapped pictures of the bar mitzvah bachur in our garden and later at the event itself. My daughter did her own hair and that of the few girls who attended. Everything worked out beautifully.

“In the alternative venue, a large space, the family and few guests sat far apart and it was completely silent during the speeches of the Dayan, the Rav, and my husband. No one sang into the bar mitzvah boy’s pshetel and he did a fantastic job delivering his pilpul.

“The most distressing part was the fact that my parents and in-laws were unable to attend because of their age and health issues. My mother-in-law commented, ‘All my life I have made sure to attend my family’s simchos, even if I had to travel around the world to be there. This bar mitzvah is around the corner and I can’t be there.’ It was difficult for all parties involved.

“I donated the flowers and leftover desserts to a family who was hosting a sheva brachos in their home the next day. At the end of the day, it was a memorable simchah and will be forever treasured by the bar mitzvah bachur and our family.”

“The beginning of our simchah was the aufruf,” shares Mr. F.*, father of a chassan. “It was the Shabbos after Purim and the olam was not so into corona then. My father, who has health issues, did not attend and some of my siblings who had family members who did not feel well also stayed home. Shabbos was beautiful and on Friday night we had about 100 people at the seudah. The kiddush was emptier than it might have normally been.

“By the time Sunday rolled around, we had woken up to a different world. We got in touch with our mechutanim to discuss our options. When would it be? Where would it be? We were on a roller coaster, going up and down, back and forth, with ideas and solutions. The chassan and kallah were absolutely spectacular throughout. They never complained or disagreed with any of the decisions we made. You know, we had our big day many years ago and now this was their only time, their big day, and they went along with whatever we said.

“Our mechutanim were on the same page as we were and were not looking to bend the rules; we just wanted to have a wedding. Monday night, because we had to cut the number of people coming to the chasunah, we began calling our friends, neighbors, and extended family to tell them they were uninvited. It was not a pleasant task while some close friends told us that they might crash the wedding. We said, ‘Please don’t come, because we don’t want to be shut down.’

“One friend called the night before the chasunah and asked me what time we’d be leaving the house in the morning to go to the wedding. I said it was a midday wedding and that we were leaving the house at 10:15 a.m. As we stepped out of the house, we heard music coming from the direction of the driveway. Cars lined up all the way up the block. Friends and neighbors were standing beside their cars, dancing to the music. There was 15 minutes of dancing — it was inspiring and uplifting! My father, unable to attend the wedding, stood six feet away from the chassan. He grasped one end of a gartel as my son held the other end and they danced. It was very moving.

We were escorted by the motorcade and it was extremely meaningful that friends, neighbors and family unable to attend the wedding had found a way to take part in our simchah.

“The wedding was small and many key people were missing: both sets of grandparents, great-grandparents, and many other close relatives. My mother-in-law was the only grandmother in attendance. We hooked up Zoom so my father could participate. Throughout the night, as people called my father to wish him mazel tov, he told them about Zoom. As a result, we had many random people watching the wedding.

“The kabbalas panim was at 2:45 and the wedding was over at 8:00. The wedding was wonderful and no one thought about corona during the celebration. I also can’t complain that I was home from the chasunah at 9:30.

“Sheva brachos were canceled and Shabbos sheva brachos found us with immediate family only, the mechutanim and their children. Our nephew joined us so that we would have a minyan for bentching. We asked our Rav about the other sheva brachos and he said no; the chassan and kallah agreed.

“The non-Jews who work with me asked, ‘Why don’t you just push off the wedding?’ It is difficult to explain that this is when it was supposed to happen. Of course, we only work with daas Torah, but we chose to keep the same timing, although many important people were missing. One uncle who did attend the wedding remarked, ‘I never felt so important before.’

“As it turns out, the next morning the couple was just as married as after a big wedding.”

Mrs. B.,* a mother of a kallah, describes her experience:

“My daughter was supposed to get married this week, but as soon as the corona situation hit, our mechutanim wanted to bring the wedding up to a week earlier. I just didn’t feel ready. However, I scrambled around and did as much as I could to accommodate the mechutanim. So the wedding was celebrated on Friday before the Monday of the original date. The chassan had an aufruf on Thursday before the wedding!

“The phone calls about where it was going to be, and then calling people about not coming, trying to reach the photographer, makeup artist, etc. were so draining. Now I am so weak and cannot move. I feel like my body has shut down. When I watched the clips of the chasunah, I wept. The chasunah was absolutely beautiful.

“Friday night, the Shabbos meal was the chasunah seudah. It was in the place where the original aufruf meal was to take place. Everything was on a much smaller scale and grandparents and great-grandparents did not attend. Many of our siblings couldn’t come. Right after the chuppah we drove by the grandparents’ homes and waved to them so they could see everyone in their wedding finery.

“I remember when the photographer called a week before the wedding and asked me if I’d canceled the chasunah. I asked, ‘What on earth for?’ When plans began to change, we considered having the wedding upstate, but that changed when immediate family members informed us that they would not be participating for whatever reasons. It was easier to do it locally.

“We were blessed that the weather on Friday was glorious and it just added luster to the chuppah. It turned out to be truly beautiful. There was a tremendous amount of stress beforehand because the unknown is scary. We never knew what the next hour would bring. It was fortuitous that many people offered assistance and a helping hand. Some offered their backyards for the chuppah, a makeup artist showed up on Friday, etc.

“The kallah was amazing. She said, ‘I don’t care. I just want to get married.’ The process of making decisions was a bit much for her, but when all was said and done, she was a trooper. Baruch Hashem, she is married and happy. The couple is stuck inside (corona rules) and getting to know each other. They are also a bit bored!”

Across the board, simchos have been pared down to the bare minimum and have still been deemed kosher and beautiful. Somehow the small number of attendees gave the weddings such meaning and made each individual feel so welcome and appreciated. It is our hope and prayer that corona blows over quickly and safely and that we celebrate many simchos together with much simchah.

*Name has been changed.