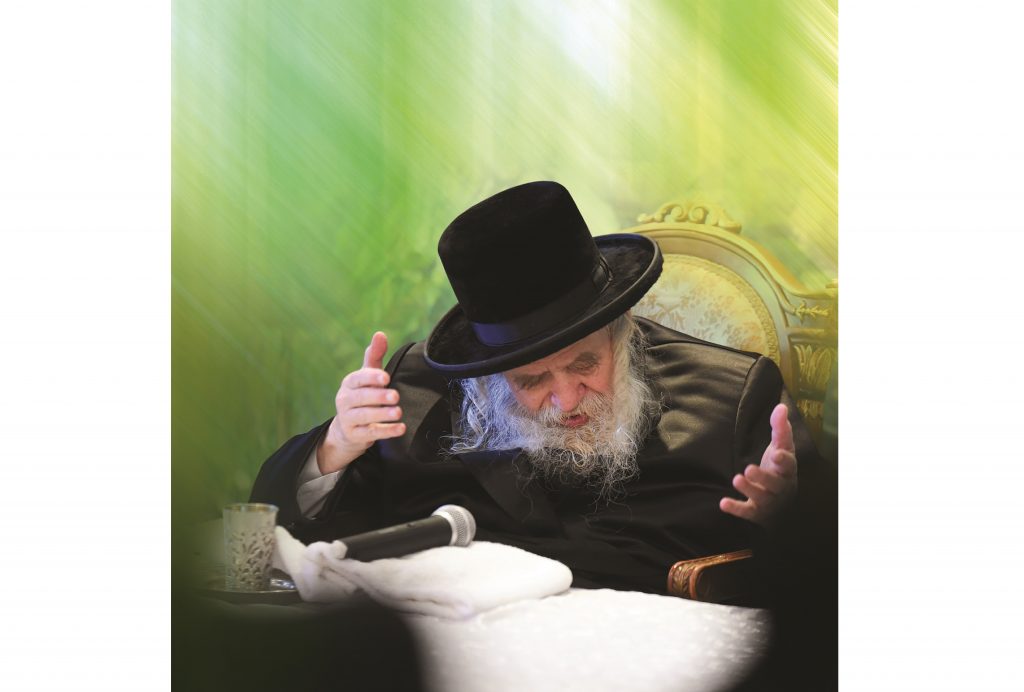 Upon entering the court of the Chernobyler Rebbe, Harav Menachem Nachum Twersky, shlita, in Bnei Brak, one is taken back to a chassidic court of old, a place of ongoing avodas Hashem with dveikus steeped in a deep level of kedushah.

Chassidim relate that earlier in Elul, the Rebbe was to spend three days in Tzfas for a short rest before the busy month of Tishrei. After one day, the Rebbe announced he was ready to return to Bnei Brak, to the astonishment of the family members and attendants who were with him. “I have davened at the kever of Rabi Shimon bar Yochai in Meron and the kever of the Arizal in Tzfas,” explained the Rebbe, “and that is enough for me to be up north…

“And if you’re looking to give me some time to myself, I can sit in Bnei Brak in my room in the yeshivah with my sefarim for a few days. For me, that’s more than enough of a vacation” — an exquisite expression of “Yisrael Oiraysa v’Kudsha Brich Hu chad hu.”

The Rebbe mentions the Meor Einayim at nearly every tisch. In general, as per the minhag in the Chernobyler courts, the Rebbes rarely offer original divrei Torah; all are based on words of the previous Rebbes of the dynasty or the divrei Torah of other tzaddikim.

The Rebbe is a scion of the Sanzer dynasty as well — his grandfather Harav Chaim Yitzchak, zy”a, was the son-in-law of Harav Yeshayah’le of Tcheichov, zy”a, the youngest son of the Divrei Chaim of Sanz, zy”a. As such, he often quotes the divrei Torah of the Rebbes of Sanz.

As a young bachur, the Rebbe was zocheh to learn in the Belz yeshivah in Tel Aviv, where he forged a very close connection with the previous Belzer Rebbe, Harav Aharon, zy”a. (It is noteworthy that the Rebbe was all of 15 years old when the Belzer Rebbe was niftar, yet he holds himself to be a close talmid.) The Rebbe is thus knowledgeable in many Belzer minhagim, some of which he has taken on himself. In fact, when Chassidim ask the Rebbe she’eilos, he will often answer based on incidents that he merited to see himself in the court of the Belzer Rebbe, or he will give answers that the Belzer Rebbe gave to his Chassidim in response to similar she’eilos.

Teshuvah All Year Round

At nearly every tisch, the Rebbe discusses teshuvah. The Rebbe finds a connection between nearly every opportune time and teshuvah, and in fact he begins the avodah of the month of Tishrei, of the heilige teg, as early as 20 Sivan.

“On the night of Rosh Hashanah, we eat the simanim and request that our zechuyos — merits — multiply. How can we ask for this?” asks the Rebbe. “Either one has done mitzvos or he hasn’t. How is it possible to add to them?” He quotes from tzaddikim that our request isn’t to add zechuyos; instead, we are asking that when we do teshuvah it should be teshuvah me’ahavah, teshuvah out of love of Hashem and not merely from fear. This is a higher level of teshuvah, and when one reaches that level, his aveiros are transformed to mitzvos.

The Rebbe adds that one may think teshuvah is difficult and way beyond reach. This is because the yetzer hara tries to persuade us that it is impossible to do proper teshuvah. The Rebbe quotes from the Akeidah that all one needs to do is turn away slightly from the aveirah — as the Midrash says, “Pischu Li pesach k’chudo shel machat — open up for Me an opening the size of a needle’s point” — and Hashem will help him do teshuvah properly.

The Rebbe adds, in the name of the first Belzer Rebbe, that teshuvah begins from one’s machshavah — a place where the yetzer hara has no influence. The Belzer Rebbe says this is the explanation of the passuk that begins the Haftarah of Shabbos Shuvah: “Shuvah Yisrael ad Hashem Elokecha — return … to Hashem” (Hoshea 14:2) — the initial and integral part of teshuvah begins with the level that only Hashem knows about.

Perhaps we can add that this epitomizes the Rebbe’s avodah. It is noted as an avodah penimis — an inner avodah that is indiscernible to the naked eye. At times during davening, the Rebbe wraps himself in his tallis to conceal his avodah. However, the Chassidim note that in recent years, the Rebbe’s avodah and dveikus has been revealed somewhat…

The Main Focus of Chernobyl: Torah

One of the main focuses of the Chernobyl court, and notably of the Rebbe, is Torah.

For example, on every invitation to the wedding of a grandchild of the Rebbe, the Rebbe has requested that not only the zmanim of the chuppah and the seudas mitzvah be listed, but also the time of Birkas Hamazon. “Tomorrow is another day,” he explains, “and if even one bachur will… miss the zman Krias Shema because of the wedding, it isn’t worthwhile to make a large Rebbishe wedding.”

The Rebbe once came to invite Hagaon Harav Shmuel Wosner, zt”l, to the wedding of a grandchild. Harav Wosner inquired about the ending time written on the invitation. After hearing the Rebbe’s explanation, he expressed his admiration.

The Rebbe originally served as Rosh Kollel in the Chernobyler Kollel in Bnei Brak from 5731/1971. After the petirah of his father, Harav Meshulam Zishe, zy”a, in 5748/1987, as the eldest son, he was appointed Rebbe and opened his court in Bnei Brak.

As Rebbe, he began to expand the mosdos. In 5751/1991, the Rebbe opened a yeshivah ketanah in Bnei Brak. Building and expanding the Chernobyler Chassidus was not the main reason he founded the yeshivah. The raison d’être was the need for a Chassidic yeshivah for those coming from Chassidic courts that didn’t have their own yeshivos and wanted to learn in a serious Chassidishe yeshivah where the language spoken is Yiddish and one of the main focuses is learning Chassidishe sefarim.

In the initial years of the yeshivah, the Rebbe would deliver shmuessen to the bachurim and was very involved with Torah, avodah and growth of every bachur. He would often tell the bachurim that the first thing to do was “to be a mentch,” and not to soar to madreigos above and beyond… He encouraged them to go to sleep at a normal hour and eat proper meals in order to be able to learn proper sedarim.

The Rebbe also places an emphasis on learning full sedarim on Friday and Shabbos — times when sedarim are generally weaker in most yeshivos. The older Chassidim recall that in his years in the Belzer yeshivah, on Erev Shabbos the Rebbe would go to the mikveh early Friday morning and learn uninterruptedly until Shabbos. It has been noted that many of the Klal Chassidi yeshivos in Eretz Yisrael have followed the Chernobyl yeshivah derech.

In the yeshivah, the bachurim need to fill out papers indicating how many consecutive hours they learned, if they said Krias Shema bizmano, and if they were on time for Shacharis and said Korbanos while wearing tefillin and b’minyan.

The Rebbe also stresses the importance of learning each sugya with full concentration and learning all the meforshim, from the Rishonim to the latest Acharonim. On Shabbosos, the Rebbe will ask his grandchildren which Gemara they are learning in yeshivah, and to each of them he will give a chiddush or a pointer in the sugya they are learning.

Over the years, the yeshivah has grown. This year, there are 380 bachurim, with shiur alef consisting of three classes. The current yeshivah building in Bnei Brak is far too small, yet the bachurim keep coming. There are rooms in the dormitory housing up to 12 bachurim, quite cramped by normal standards, yet Chernobyl still attracts the cream of the crop of the Chassidic world, with many bachurim coming from overseas. To remedy this challenge, the Chernobyl yeshivah received an allocation for a new building in Elad, where there is a Chernobyl community, and the building — which will accommodate all the bachurim — is currently under construction.

The Rebbe mentions that Sukkos is called Zman Simchaseinu, the Yom Tov of simchah. The simchas beis hasho’eivah began on the second night of Sukkos, the Ushpizin of Yitzchak Avinu, who is known for the middah of yirah, fear — seemingly the opposite of simchah.

The Rebbe elaborates, quoting the Zohar that explains yiras ha’onesh — fear of Hashem due to punishment — as fear of a leash, which is apparently a low level, as one is fearing the leash and not Hashem. The Rebbe explains this concept based on the Tiferes Shlomo, who quotes the Baal Shem Tov, and ties it to Rosh Hashanah and Yom Kippur. In our tefillos on the Yamim Nora’im we say, “Uv’chen tzaddikim yiru v’yismachu — and tzaddikim will fear and rejoice.” The Baal Shem Tov explains that yirah of Hashem is totally different from fear of man or animal. That fear causes one to run away, to escape the situation. On the other hand, even if one might initially have yiras Shamayim from fear of punishment, he doesn’t seek to flee from it; instead, he attempts to reach the higher madreigah of proper yirah.

This explains the apparent conflict of simultaneous yirah and simchah. One is b’simchah that he has yirah, even if it is only an external, lower-level fear, because it will lead to the next madreigah of proper yiras Shamayim.

Kedushah, Not Technology — A Segulah for Parnassah

As a Rebbe and manhig in Klal Yisrael, the Rebbe hears about many tzaros Yisrael globally. The Rebbe feels and empathizes with every tzarah as if it were his own.

One of the issues the Rebbe takes most to heart is the problem of technology and the many who have, tragically, fallen because of it. At a hachnasas sefer Torah several years ago, the Rebbe broke down in tears when he spoke of the challenging nisyonos that the so-called technological advances have brought upon Klal Yisrael.

To those who claim they need technology for parnassah, the Rebbe notes regarding the Ushpizin of Yosef Hatzaddik — whose middah is kedushah — that the passuk (Bereishis 42:6) says “Yosef… hu hamashbir” — Yosef HaTzaddik was the one who supplied the food to all of Mitzrayim.

This is a limud for us in today’s generation, the Rebbe expounds, that specifically Yosef — who is seen as the embodiment of kedushah — was the wealthiest of the Shevatim. This can be taken as a lesson and used against the yetzer hara who tries to convince people that they “must” update their use, or misuse, of technology for parnassah reasons. One needs to respond to the yetzer hara that Yosef HaTzaddik, who was the most sheltered, was also the most successful in parnassah. If one protects himself, he will be zocheh to an uninterrupted shefa — abundance —from Hashem.