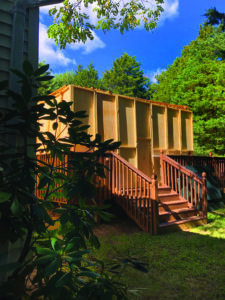 Eli Raider is a 19-year-old bachur currently learning at an American yeshivah on the outskirts of Yerushalayim. This past summer, while home in New Jersey, he started his own business with a laser-like focus on building a good name. Eli believes that having a reputation for reliability, honesty and getting the job done will ensure, b’ezras Hashem, business success even just doing odd jobs. Eli’s wisdom belies his youth.

I met Eli in August when I needed to move from storage a huge number of boxes containing sefarim and papers, plus bookcases and a desk. Because a professional mover is expensive, I asked around for some young guys whom I could pay to move my stuff. Someone recommended Zalmy, who told me that because he’s in Eretz Yisrael, I should call Eli. So, I contacted Eli who quoted me his (very reasonable) cost per hour and assured me that he and his assistant would absolutely get the job done.

To my pleasant surprise, when it came to doing the job, Eli and his worker (19-year-old Yosef) worked very hard, used seichel, and operated efficiently. Just as important, Eli was honest, shutting off his work timer when he took a supper break even though I wouldn’t have noticed. Eli accomplished his stated goal of exceeding my expectations. Subsequently, I hired Eli to do a couple more odd jobs for me and recommended his services to a friend.

Eli shared with me his approach to creating a new business by building a good name.

“My goal was to find a need people have in my hometown community of Passaic-Clifton and fill it. That’s why the flyer I put out says on the top, “NEED HELP?” and I give examples of things I can help people with, i.e., moving, clean up, installation, etc. I don’t promote myself as a person — I promote the things I can do for you. I view myself as a service provider helping people solve their problems, not a businessman.”

When he was a younger teenager, Eli worked as a counselor in Passaic day camps, i.e. Camp Nofesh and Camp Eshei. Eli spent the summer of 2020 helping his friend Zalmy do odd jobs. Come the summer of 2021, since Zalmy was away in Israel, Eli decided to strike out on his own.

Eli surprised me when he said that while his first five customers at the beginning of the summer were referred to him by Zalmy, his subsequent jobs came from the recommendations of those initial people. “Those recommendations for jobs kept me and my crew (his friends) busy all day, every day, for the rest of the summer,” Eli recounted. “I did a job for Reuven and he told Shimon who then told Levi. My name was getting passed around. As the Gemara says, everyone has a friend of a friend.

“My mantra is to be as honest, reliable and straight up as possible. I got these values from my parents and others in my life. That is how I built my good name.

“I also told my crew, ‘We’ll exceed everyone’s expectations by interacting nicely with customers, doing a thorough and quality job and ensuring it is completed in a timely fashion.’”

Eli genuinely believes that “word of mouth is the best way to get business. By doing a good job for someone, you’re creating an advertisement for your own business. I see that reputation gets you hired, not the price, because people need to be able to count on you.”

He elaborated on this point, “Building a good name for myself was more important than making short-term profits. Helping people solve their problems will build a good name. This focus will eventually lead to long-term profits.”

Eli noted, “A yeshivah in Passaic hired me to move stuff for them, so I gave them the lowest possible rate, which is my form of doing chessed.”

Eli finds it meaningful that many people said to him, “Every Jewish community needs someone who does what you do.”

Eli is back learning in his yeshivah in Eretz Yisrael. He closed down his business rather than let his New Jersey-based workers continue on without him because he can’t guarantee quality control and he doesn’t want to hurt his reputation. As he put it, “The key to my business is my reputation.”

Eli is especially enjoying this year in yeshivah because “every penny I spend here in Eretz Yisrael, I earned through my own hard work. Starting my business based on building a good name gave me a sense of accomplishment and enabled me to help others, which gave me tremendous satisfaction.”

Eli concluded, “I want the message to get out to other young people that, with siyatta diShmaya, they too can succeed in building a small business by focusing on building a good name by doing what they do.”