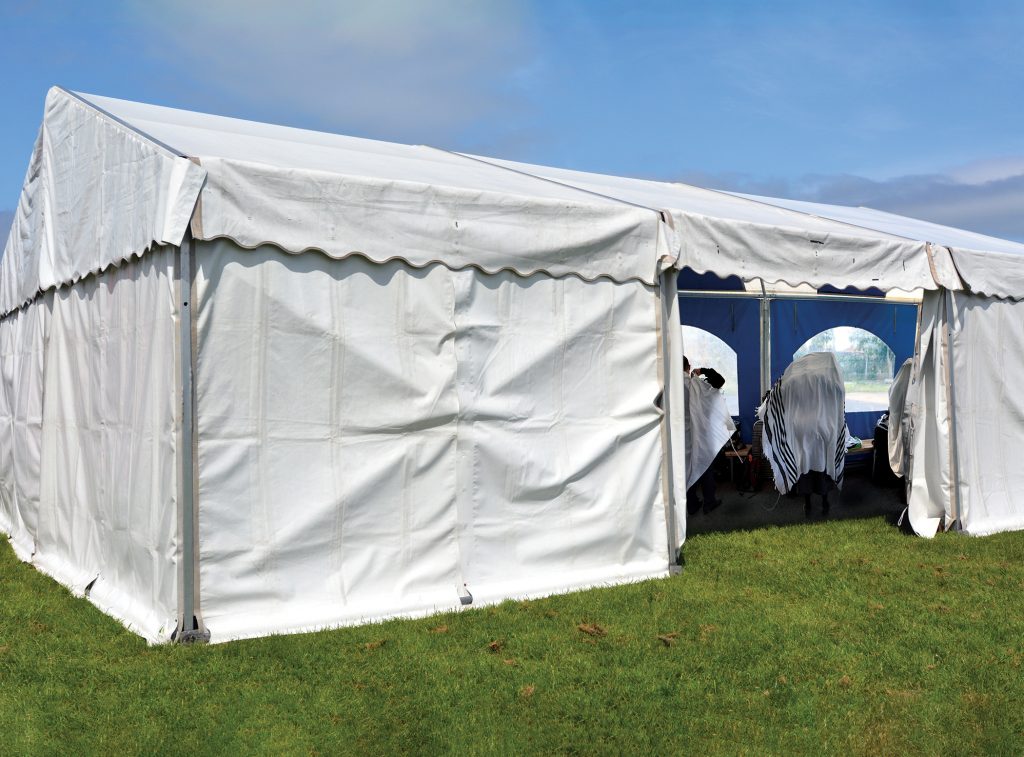 The scenario has played out in several new neighborhoods that have attracted an influx of people from different backgrounds. As the residents begin forming the infrastructure of a kehillah, decisions have to be made concerning the shape and style of the shuls and other institutions that the neighborhood must develop.

Despite the best intentions, their vision for the future of the area that they call home and where they plan to raise their families can be poles apart. Try as they may, a happy medium is not always possible, or necessarily warranted. Sometimes, division can lead to multiplication — two separate kehillos, each striving to serve Hashem in the manner to which they are accustomed, can be more suitable than trying to combine divergent paths.

As numerous families moved into one neighborhood on the outskirts of Lakewood, the residents at first joined forces to create one unified shul. The roadblocks thrown in their path by local officials, including zoning and other regulations, made it difficult; resources that may have otherwise been invested in the infrastructure were diverted.

At the same time, a decision was made to recruit and employ a Rav for the growing kehillah. Upon the advice of the local Rabbanim, the candidate chosen would have to have the backing of 80% of the members. This proved a major challenge, with various factions possessing disparate preferences. There was wide agreement about the need to have a leader, with less concurrence as to what type of leader they wanted. Backgrounds played a role in these preferences, and the daylight visible between the factions began showing. What in theory should have brought unity to the neighborhood began to have the opposite effect, and while many worked to heal the rift, a fissure seemed to be forming beneath the surface.

As the coronavirus pandemic caused a lockdown of the shuls and community, the separation allowed for a period of reflection and introspection. Various projects were initiated, including remote shiurim through which the community would be able to maintain a connection. Yet, in the end, the space afforded by the closure of the shul only further widened the gap between the congregants .

Time went on and restrictions were loosened. Before long, it was possible to restart minyanim, albeit in a limited manner. With a return to the shul still weeks away, one of the stalwarts of the neighborhood set up a large tent in his backyard, inviting many of his like-minded friends to join him in resuming tefillah b’tzibbur. Since the size of the enclosure limited the number of mispallelim, a select group formed. While those on the outside may have viewed it as elitism, those who joined saw it as a means to craft a tzibbur that would be beneficial to their davening and avodas Hashem.

When permission was finally granted for shuls to reopen, the tent members decided they were content with their new arrangement. Funds were secured to convert a garage into a more permanent beis medrash, and the members of the tent minyan were ready to officially open as an independent shul.

When word got out of their plans, some of the elected officials of the “old minyan” approached the break off group in an attempt to reconcile the differences. The chasm, however, was hard to bridge. When asked, “Would you be willing to bring back the candidate we wanted as a Rav?” the answer was negative. Although not a deal-breaker, the proposal signaled that the aspirations of the two factions were not quite in sync.

“We honestly felt that the time was ripe for us to make a move,” says Meir, who held a prestigious position in the old minyan before COVID-19 set in. “We knew that some would inevitably be upset with us, and it had the potential for disrupting the serenity of the neighborhood, but nevertheless it was something we really believed in. Despite numerous attempts to compromise on some key issues, we came to the conclusion that the goals of the people were not in alignment. So rather than arguing and struggling to hold things together, it was better to utilize this opening to start something new.”

Other factors played a role as well. “My oldest child is entering cheder this year,” Shaul says. “The location of the old shul is a good 15-minute walk from my house. Although in the future my son will join me as I walk to shul, at this point he is not old enough to stay with me for the entire davening, and it is better for him to be in shul for a shorter period of time. There is no way for him to walk the long distance alone, and this prevents him from attending shul altogether at this crucial stage of his childhood. The new shul is just a block away from my home, which allows him to come later and spend just the right amount of time with me in shul. So although it was not the deciding factor, the new minyan certainly had an added advantage.”

Before moving forward with their plans, the break-off minyan consulted with daas Torah, a recognized Rosh Yeshivah and leader of a kehillah who they felt could give them an unbiased opinion regarding the merit of their proposal. After hearing the pros and cons of the intended move, the answer they received was in the affirmative.

“Many communities have gone through similar situations in the past,” the Gadol informed them. “In one community, there was an established institution that had served all constituents for decades. As more people settled there, the newcomers wanted to establish an institution that would operate on a different level. After much discussion, it was decided that they could go forward. In the end, both constituencies gained, as they were able to concentrate on their own clientele. In this situation as well, the end result will, b’ezras Hashem, benefit all parties.”

Is this a casualty of a tragic situation, or is it an opportunity to resolve an unsustainable one? As with most events, it is a matter of perspective. Can a group of Yidden be upset if another group wishes to daven earlier or later than they do? Can a kehillah be offended if some people want a Rav who will be somewhat like the Rosh Yeshivah they were accustomed to while learning in yeshivah and kollel, while others prefer a manhig reminiscent of the Mara d’Asra of their youth who exudes a heimishe varmkeit? While logic may dictate to embrace these differences, emotions often hinder the acceptance of different approaches.

Striving for a Peaceful Coexistence

A few weeks later, the changes brought about by the break-off became a reality. Although there are definitely some hard feelings on the part of some members of the original shul, those in the new minyan have gone out of their way not to offend anyone.

“When Tishah B’Av came around, we wanted to bring in a speaker for inspiration. A suggestion was made to bring in the candidate for Rav who was rejected by the other people. In the end, we opted not to bring him in because we felt that it might be viewed negatively by those who remained in the old minyan,” Meir shares.

Attending simchos has been a touchy subject as well. These young families are, baruch Hashem, celebrating various joyous occasions, and in the past these get-togethers served as a means of unifying the community. Whether it was a Friday night shalom zachar or a Shabbos morning kiddush celebrating the birth of a baby girl, neighbors celebrated collectively by sending cakes, platters and other contributions, then coming together in song and spirit to bolster their camaraderie.

“I worry about attending a kiddush in the old shul, dreading the reception I may receive. Try as we might to show that the break-off was not personal, some have taken it personally,” Shaul says. “Yet with time, I think it will get better. We all want to raise our families with simchah and in a peaceful environment. As the new reality sets in, I hope all will realize that we remain one neighborhood with common needs and shared desires.”

In the past, when the subject of constructing an eruv came up, each family contributed to the costs and the upkeep of the eruv is still shared by all. Surely, in the foreseeable future, other communal infrastructure and cooperation will be needed. School busing, which is an issue in the outlying communities near Lakewood, will have to be dealt with collectively.

“If each kehillah would be able to get a Rav to lead them, I’m sure these issues would be handled between them, and there would be no disruption in vital services,” points out Meir. “But without Rabbanim, everyone has their say, and that makes it harder to come together. The irony is that by splitting into two shuls, it will be harder to finance the salary of each Rav, which may delay it from happening for a while.”

With the new minyan underway, one of its members decided to enhance the community by starting a night kollel in the shul. Although it is a large undertaking, he managed to raise the funds necessary for 16 yungeleit to learn there each night. The old minyan upped their game as well, as they inaugurated a nightly minyan for Maariv. “These developments seem to indicate that the Gadol was correct in his assessment that in the end, both sides would benefit and grow,” says Shaul.

While this was happening, the residents of a nearby neighborhood who, until COVID, had been davening in the other neighborhood’s shul, found they could no longer daven there due to the new restrictions on minyan size. These people ended up starting their own Shabbos minyan in their neighborhood as a result. Although this had always been in the plans, since the walk from their neighborhood is quite long, COVID accelerated its actualization.

“We were hesitant if we should go ahead at the time, and we were unsure of our priorities as well,” says a resident of the neighborhood. “Should we prioritize getting a Rav, or arranging a proper setting for the minyan? In the end, we asked daas Torah and were told to secure a proper location first. So we invested our resources in that and we are off to a good start.”

Although it lost some of its members, the old minyan is working to solidify itself through the bond that brought the area’s residents together in the first place. As the neighborhood continues to grow, with new families moving in every few months, many feel drawn to the more established kehillah and will join them. Others will probably feel more comfortable in the new, smaller shul. Nevertheless, there is a determination on the part of both shuls to coexist in peace.

Diverse congregations, but shared outcomes. “V’yei’asu chulam agudah achas la’asos retzoncha b’leivav shaleim — May we all become one association in order to do Your will with a complete heart.”