FromINYAN Article Beauty Is in the Eye of the Beholder 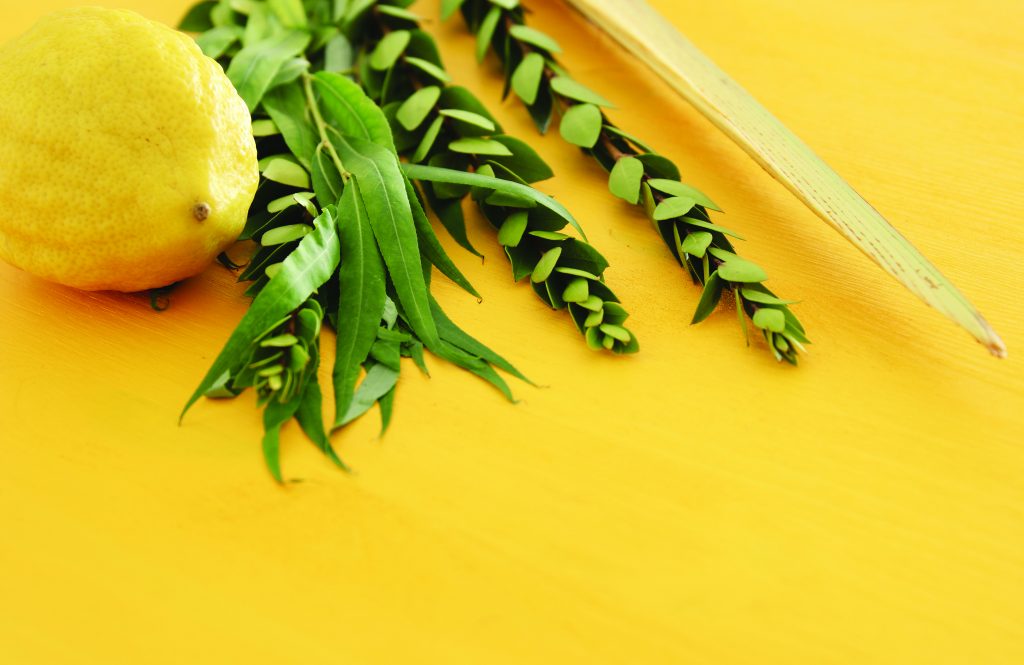 “Ulekachtem lachem pri etz hadar…” The Torah does not specify the exact species of fruit that is taken on Sukkos, yet the Rambam in his introduction to Pirush Hamishnayos writes that no one disputes that this “beautiful fruit” is indeed an esrog.

“I once heard said in the name of Harav Yaakov Kamenetsky, zt”l,” says Rabbi Tzvi Kramer, who has been selling arbaah minim for a quarter of a century, “that the Torah specifically used this ambiguous language because each person defines beauty differently. Each person finds a chein according to his own techunas hanefesh, his personal character and state of mind. Once the basic halachah for ‘hadar’ is satisfied, each person is drawn to a specific type and form of esrog which finds favor in his eye, and in his view, it is hadar — beautiful. And that is the esrog he will buy and make the brachah on.”

There are many sources in halachah and elsewhere that discuss various aspects of the arbaah minim: shape, texture, color and more. While searching for his arbaah minim, one must often choose one attribute over others. In discussions with several esrog sochrim (merchants of arbaah minim), we learn that indeed beauty is in the eye of the beholder.

Rabbi Tzvi Kramer is based in the Kensington area of Brooklyn, New York. As a talmid of Yeshiva Torah Vodaath and a member of their kollel, Rabbi Kramer utilizes the yeshivah’s premises as the headquarters for his arbaah minim distribution, which for decades has afforded his customers a valuable convenience.

“Harav Yisroel Belsky, zt”l, had his classroom, which served as his office as well, right down the hallway from where I showed my wares,” says Rabbi Kramer. “Many customers would avail themselves of his expertise and just walk down the hall and have him examine what they chose. Harav Belsky was a Posek not only on the halachic aspects of the arbaah minim, he was proficient in the physical details as well. Whether they were his talmidim or not, he would advise anyone who came in and patiently explain the advantages of each piece. At times, he was effusive in his praise, and at other times, he would simply say it was pasul and I would take it off the table. Once in a while, he would check a mark with his loupe to see if it was chaser, missing part of the skin, and if he was not sure, he would say, ‘I can’t tell; you should look for another one.’

“I was always nervous about selling items that were questionable. I approached Harav Belsky and he gave me guidelines as to what was best, and what could be sold b’di’eved for those who could not afford higher quality, or for chinuch sets to be used by children.”

What do people look for? Rabbi Kramer says that it usually depends on their upbringing and background. “Customers who have a more Litvishe bent usually pay more attention to the cleanliness of the esrog. They are looking for an esrog that is as clean as they can find, and they are less particular regarding the shape. Others care more about the shape and form, and they will suffice with what is required by halachah in regard to cleanliness.”

Most of his customers want Chazon Ish esrogim, but lately many have been asking for Teimani (Yemenite) esrogim, since they too are considered to be bilti murkavim, meaning they have not been grafted with other species over the years. “In addition, I have some Moroccan esrogim as well, since some of my customers want them.”

Over the years, Rabbi Kramer has developed a relationship with his customers and by now knows more or less what they like. “I have one customer who calls me each year in Elul to remind me to put away something nice for him. When he arrives, I take out the box which I reserved for him. After he oohs and aahs over it, he will ask if there is anything else. I show him another five or six, but he always comes back to the first one I showed him.”

Regarding lulavim, Rabbi Kramer relates that besides being closed on top, Rav Belsky was careful that it should be as straight as possible. Today, with several brand-name lulavim available, the quality is vastly improved. Although they are still not cheap, one can find a quality lulav with much less effort than it took in the past.

Efraim Keller has been cutting and selling arbaah minim since he was 15 years old, for over 30 years. His father, Rabbi Yidel Keller, z”l, would travel with him to the fields of Calabria in Italy, where the farmers knew what he wanted for his customers.

“Since my customers consist mainly of Chabad Chassidim, I try to choose esrogim which conform to the minhagim of Chabad,” Efraim tells us. “The Alter Rebbe, zy”a, said that the esrogim of Calabria are true esrogim, and we cut our esrogim there each year, as well as in orchards in Eretz Yisrael which are grown from these fruits.

“In addition, the Alter Rebbe held that the esrog should be rounded at the top. Through my experience in the fields I learned that the fruit which grows earlier in the season, from April to June, absorbs more water, and the crown of the fruit is fuller and more rounded. Those growing in July and August are more pointy.

“Another hiddur that we have in Chabad is known as ‘Chavah’s biss,’ or the ‘bite of Chavah.’ According to one opinion, the Etz Hadaas was an esrog tree, and we find some esrogim that appear to have ‘teeth marks’ on them. Many consider these a hiddur, and the farmers know to cut these for me.”

When it comes to the hiddur of cleanliness versus that of shape, Efraim relates a story his father told him. “A person wanted to become an esrog socher and approached the Rebbe the Maharash, zy”a, for his blessing. The Rebbe showed him two esrogim, one that was cleaner and one that had a better shape, and asked him which one was better. The fellow replied, ‘I think the Rebbe feels that the one with the nicer shape is better, but I would like to know the reason why.’ The Rebbe answered, ‘An esrog is like a mentch (person), and the shape of the person makes him a man. Every person has some deficiencies, represented by the flecken (spots). But first, it has to be a mentch, a person.’ For this reason, I would give preference to the esrog with the better shape over the cleaner one, as long as it does not have disqualifying spots.”

Efraim points out that in Chabad they have a mesorah that if the lulav is covered with the brown film in which it grows, which they refer to as moch, one can rest assured that the top is closed and it is kosher without checking it.

“By my Chassidishe customers, an esrog without a pitom is almost not considered an esrog,” says Rabbi Kalmy Katz, who has been selling esrogim in the Harmony Farms neighborhood of Jackson and in Lakewood, N.J., for over a decade. “By the more Litvishe, they may take one without a pitom if it is cleaner. Nevertheless, some are worried that when the pitom fell off during the growth of the esrog, it may have left a hole, and it if the hole goes down to the chadrei hazera, where the seeds are located, the esrog will be pasul. I have inspected many esrogim by cutting them open, and I can say it is very rare that the hole reaches the chadrei hazera. Yet some check this out by sticking a hair into the hole to determine how deep it is, although this does not always work, since if the hole twists along the way, it will block it.”

As far as lulavim are concerned, Rabbi Katz says that besides checking the top to ensure it is closed, one must also check the straightness of the lulav. Many customers prefer a thick lulav as well. “One thing that is often overlooked is to check the color, since it can present two problems: If it is pale, the lulav may be drying out, and if there are dark areas, it may be a sign of mold, which can be problematic.”

Stephen Colman, proprietor of the Arbaah Minim Center, is based in the Golders Green Beis Medrash, commonly referred to as “Munks.” When asked to describe the preferences of his customers, he breaks them down into three basic groups.

“The first group consists of those who are not familiar with choosing the arbaah minim, and they don’t pretend to be. They will ask for help and follow the advice and guidance of our staff. The second group consider themselves experts and come with their loupes in hand. Yet I often spy them checking over their shoulders and looking at the fellow nearby to see what he is doing so they can copy him. Finally, there are those who truly know what they need and want, and they sort of take care of themselves.

“We set up a beis horaah, which is an independent group of Rabbanim who are located nearby who rule over the kashrus of the minim we sell,” reports Stephen. “This way, each customer can have a Rav examine his choice and give an opinion about it.”

When a customer asks for assistance with checking an esrog, Mr. Colman shows them how to begin the examination. “I explain that they should first peer downwards at the chotem, the ‘nose’ or top of the esrog, since this area is the most vital. If it is relatively clean, chances are it will be kosher, or even mehudar. Next, there are preferences in the shape. The more baalebatish people give more importance to the shape; some prefer with a ‘gartel,’ meaning it appears the esrog is cinched around the center like it’s wearing a gartel. The more Litvish people are more concerned about the yichus (pedigree) of the esrog, and most ask for Chazon Ish esrogim. They are quite particular about the cleanliness of the chotem and less concerned with the shape.”

When it comes to lulavim, Stephen explains that the Deri lulavim that come prepackaged are popular. Lately, he adds, he has brought in Spanish lulavim, which are quite good as well. “The Moroccan lulavim are of lesser quality, with only 30% of them considered good.”

The Midrash teaches that the arbaah minim represent the different segments of our nation. When they are bound together, we unite in serving Hashem with simchah. May we soon be joined together as we celebrate the joy of the Yom Tov in Yerushalayim Habenuyah.