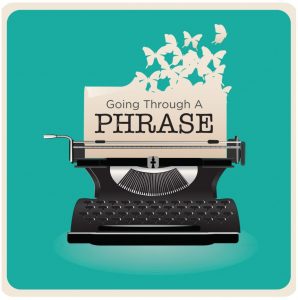 I was walking to shul one Shabbos and I saw an ID tag that someone had lost. It had his name and picture, and his title: ORDERLY.

I thought of making a card with my name and picture, and the title: DISORDERLY.

Before I knew it, my mind was off and running on a column. But it was Shabbos, so I couldn’t write anything down.

One of the hardest things for people to get a handle on is the concept of prohibited “work” on Shabbos. Relax. I’m not a Rabbi and this is not a sermon. Just from the language angle, in After the Return, Rabbi Mordechai Becher and Rabbi Moshe Newman explain:

“In prohibiting work on the Shabbat the Torah does not use the term ‘avodah’ (labor) as it does regarding the work of the Jews during their enslavement in Egypt. The use of the term ‘avodah’ would imply that physical exertion is prohibited, and would be similar to the scientific definition of work (Work = Force x Displacement). The term used in the context of Shabbat is ‘melachah,’ which implies a more subtle definition of work, similar to its use in regards to the building of the Mishkan (Tabernacle), where melachah actually means ‘skillful, constructive activities.’”

I like to believe that my column is skillful and constructive. But just thinking without writing isn’t an activity. So, even though it was Shabbos, I allowed myself to think about the column.

Then, as I was walking and thinking, I got a sign; I saw the handwriting on the wall. OK, it wasn’t handwriting. But it was a sign and it was on a wall.

I passed a shop that had a building code violation. And on the wall, outside the shop, in big, bold letters, the sign said: “STOP WORK ORDER.”

What’s work and what’s play? If you are blessed with enjoying your work, the line between work and play is blurred. Mark Twain said he never worked a day in his life. “It has been play. If it had been work I shouldn’t have done it. … The work that is really a man’s own work is play and not work at all. … When we talk about the great workers of the world we really mean the great players of the world. The fellows who groan and sweat under the weary load of toil that they bear never can hope to do anything great.”

I once heard an interview with an author who said, “I’m not really a writer. I’m a word-dancer.”

I say words are my tools and my toys. I play with words — like LEGO blocks — to see what I can build with them.

Wordplay is more than a technique, though. It’s a mentality.

James Thurber was a meticulous craftsman, constantly rewriting and polishing. But his method was as much play as work.

A writer collaborating with Thurber mapped out a plot for a story, and got to a point where he didn’t know what to do with the characters. Thurber said he wouldn’t be able tell him until he “sat down at the typewriter and found out. I don’t believe the writer should know too much where he’s going. If he does, he runs into old man blueprint — old man propaganda.”

Thurber told Paris Review, “I never quite know when I’m not writing. Sometimes my wife comes up to me at a party and says, ‘Thurber, stop writing.’ She usually catches me in the middle of a paragraph. Or my daughter will look up from the dinner table and ask, ‘Is he sick?’ ‘No,’ my wife says, ‘he’s writing something.’”

As children, we learn to play with words. Wise teachers nurture the association between learning and fun.

In A Cognitive Linguistics Account of Wordplay, Konrad Żyśko begins with an analysis of the meaning of wordplay. Some linguists say that any “text is a maze where anything can be considered to be wordplay.”

A more common claim has it that wordplay is a “linguistic device used for entertainment.” This fits in with the findings of British linguist David Crystal:

“We play with language when we manipulate it as a source of enjoyment, either for ourselves or for the benefit of others. I mean ‘manipulate’ literally: we take some linguistic feature — such as a word, a phrase, a sentence, a part of a word, a group of sounds, a series of letters — and make it do things it does not normally do. We are, in effect, bending and breaking the rules of the language. And if someone were to ask why we do it, the answer is simply: for fun.”

My grandson Avraham Yitzchak doesn’t know about linguistics. But he has a genetic predisposition for wordplay. While he was helping his father clean their van for Pesach, he stopped to read the label on the vacuum cleaner and said,

“Tatty, I don’t think we can use this to clean up the Cheerios.”