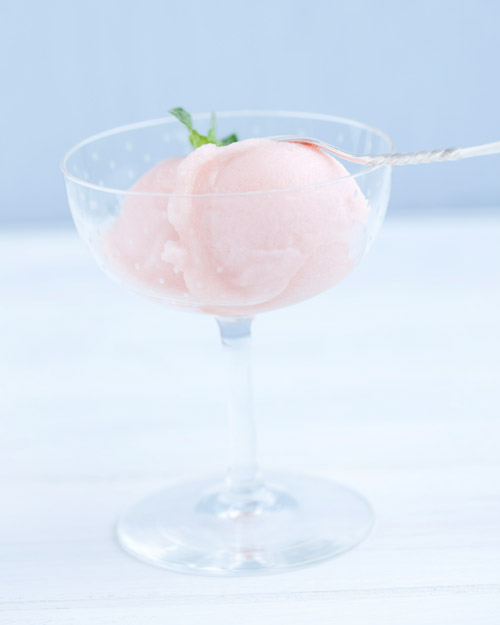 Did you know the grapefruit only became popular in the late 19th century; before that it was grown strictly as an ornamental tree? The grapefruit tree grows to be as large and strong as an orange tree and may be as tall as 20 feet high. The foliage is very shiny and dark with clusters of large, white flowers. The fruit also grows in clusters — hence the name grapefruit. The clustered growth is reminiscent of the way grapes grow on the vine.

Eating fruit in season always affords you best flavor and price. Winter peaches just don’t cut it in my book. Grapefruit is at the peak of its flavor from October to April — so enjoy it now.

Juicy grapefruit is very low in calories; it has just 42 calories per 100 grams. It is rich in dietary fiber that has been shown to reduce blood cholesterol levels. The fruit contains very good levels of Vitamin A and antioxidants, which help to protect from lung cancers.

It is an excellent source of antioxidant Vitamin C, providing about 52 percent of the government’s recommended daily amount. Potassium, also abundant in grapefruit, helps control heart rate and blood pressure.

Grapefruit comes in many varieties. The most popular varieties cultivated today are red, white, and pink hues, referring to the color of the pulp inside.

Red varieties of grapefruits are especially rich in the most powerful antioxidant, lycopene. Studies have shown that lycopene protects skin from damage by UV rays, and offers protection against many types of cancer.

Grapefruit was first cultivated in the dry sunny islands of the Caribbean. As we said, it was only in the late 1800s that people began enjoying grapefruit. Their popularity grew slowly but by the 1980s, 60 percent of world production moved to the United States, mainly to Florida, Texas, Arizona, and California. This transition was mostly due to an early pioneer in the American citrus industry called Kimball Chase Atwood, a wealthy entrepreneur who founded the Atwood Grapefruit Company in the late 19th century. The Atwood Grove became the largest grapefruit grove in the world, with a yearly output of 80,000 boxes of fruit. It was there that pink grapefruit was first discovered in 1906.

More than half of the United States’ crop is canned or frozen.

Grapefruit has since become popular as a breakfast fruit in various parts of the world, and production has expanded to other citrus-growing countries, notably Israel, Cyprus, South Africa, and Brazil. In other countries, grapefruit is not associated with breakfast but rather as a base for a popular candy treat. In Costa Rica, grapefruits are cooked in a way that removes their sourness, stuffed with dulce de leche, and served as dessert.

When buying grapefruit, choose fruits that are heavy for their size, with smooth, shiny skin. These are good indicators that the grapefruit will be juicy. Grapefruit will keep at room temperature for a week when stored in a bowl or basket with good air circulation. Kept in an airtight bag in the refrigerator’s crisper drawer, it can be stored for up to two months.

Grapefruit recipes are mostly simple so as not to mask its delicious tart flavor. Ours follow that school of thought as well.

If you really want to stick with quick, just remove the segments from 5 or 6 grapefruits, toss with a large can of mandarin orange segments and a bit of orange liquor, and serve.

This takes just seconds to prepare but makes for a sophisticated dessert.

Heat broiler with rack set 4 inches from heat. With a paring or grapefruit knife, loosen grapefruit segments from membranes and pith.

Sprinkle grapefruit halves with sugar and cinnamon. Broil on a baking sheet until tops are slightly browned, 4 to 5 minutes.

Top with yogurt, garnish with more cinnamon — and enjoy!

This recipe can also be made for Pesach, for a refreshing dessert after a heavy meal. Don’t leave out the black pepper — that’s what makes it exciting!

Combine the sugar, water, and grapefruit zest in a medium saucepan and bring to a boil over medium-high heat, stirring occasionally until the sugar dissolves. Remove the pan from the heat and set it aside to steep for 5 minutes.

Stir in the grapefruit juice and lemon juice. Strain the mixture through a fine-mesh sieve into a bowl. Stir in the black pepper, and set it aside to cool. (It will cool faster if you set the container in a bowl of ice water and stir it intermittently.)

Cover and refrigerate the sorbet base until it is thoroughly chilled, about 4 hours or up to overnight.

Place the sorbet in a wide container and freeze 30 minutes. Using a hand blender or food processor, purée the mixture and return it to the freezer. Freeze again for 30 minutes and purée once more.

Pack sorbet into an airtight freezer container, cover, and freeze until ready to serve. 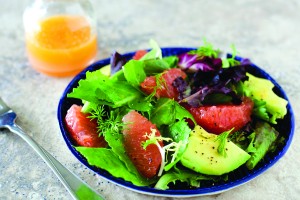 The flavors of grapefruits and avocados go well together. This unusual combination has gained popularity recently.

Slice avocado into long wedges approximately ½” thick. (This is easily done with an avocado slicer.)

Brush 2 teaspoons lemon juice over flesh of avocados; set aside.

Remove peel and pith from grapefruit using a sharp paring knife. Working over a medium bowl to catch the juice, carefully carve out segments from between membranes.