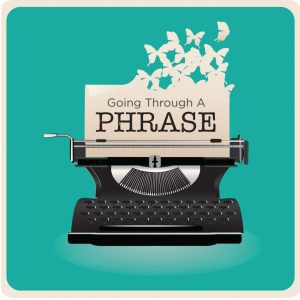 Mrs. Chaikie Brown sent me a kind note about the column. She wrote, “The subject matter is certainly of interest to me as I am a lover of good grammar (almost nonexistent these days) and etymology.”

I won’t try to prove the existence of grammar. (How many gerunds can dance on the head of a pin?) And I didn’t have the heart to tell her that I look at grammar as an arcane mystic art — more akin to numerology than to poetry.

“We often have family discussions about the origins of various words and after attending a bris, we were wondering about the Yiddish word ‘kvatter.’ Have you any idea regarding its root?”

Before we get to kvatter, it’s important to understand the word bris. It’s commonly used to mean a circumcision. But that’s an example of synecdoche — a figure of speech using part of something to mean the whole (like wheels to mean a car). The full term is bris milah — covenant of circumcision.

The meaning of bris is at the heart of one answer to an old question. The Sages tell us that the Patriarchs were so spiritually attuned to the Divine that they observed the Torah even before the laws were given. If so, why did Avraham wait to be commanded to make a bris? Why didn’t he know to do it on his own?

The Beis Halevi answers with the definition of bris. A covenant is an agreement between two parties. You don’t sign a contract with yourself.

Perhaps this covenant is why a bris is a communal event among Jews of all backgrounds. When my son Meilech was born, we lived in an Ohr Somayach outpost, a one-donkey village in northern Israel called Givat Ada. (There were buses — twice a day.) That was the first bris in Ohr Somayach Givat Ada. And virtually the entire village turned out — including the mayor.

Ah yes … you were waiting for the kvatter. Now where have I heard that before? (Caution: Don’t rely on my theory of the relativity of time and space at a bris. The schedule is relative to the relatives. And there’s an unwritten Jewish corollary to Murphy’s Law: If you depend on a simchah starting late, it will start on time.)

The kvatter is the one who carries in the baby. Rabbi Paysach Krohn, the mohel’s mohel, explains in his book Bris Milah: “The origin of the word kvatter is unclear.”

I could have told you that.

But he offers several etymologies: First, he quotes Zocher HaBris that “Some derive the word kvatter from the German word Gevatter,
which means ‘intimate friend.’”

He quickly adds that the word Gevatter in German also means godfather. But, “despite their phonetic similarity, they are totally unrelated etymologically.” And he points out that “there are no legal nor traditional ramifications or responsibilities that go along with this honor.”

Harav Dovid Cohen, Rav of Khal Gvul Yaavetz, wrote a delightful series: Yiddish: A Holy Language. He draws a fascinating correlation between kvatter and ketores — the Temple Incense. Both the sandak (from Greek suntekos — companion of the child; Rabbi Krohn) and the kvatter are compared to the holiness of the Kohen offering the Incense in the Temple.

Our enemies have historically targeted the covenant of bris milah. And — just as tenaciously — even non-religious Jews clung to the heritage.

Back in the early days of Ohr Somayach in Yerushalayim, a student came to my brother Rabbi Nota Schiller with a quandary: He never had a bris.

His mother, a Holocaust survivor, was physically liberated,
but broken in spirit. To distance herself from anything Jewish, she married a Swedish diplomat. And she never told her son that he was a Jew. As Heaven would have it, he found out by accident. Curious, he traveled to Israel, where Rabbi Meir Schuster, z”l, met him and sent him to learn in Ohr Somayach. (He eventually went on to advanced learning in kollel.)

A few days later, the student came to the office and asked to make a phone call to his mother. The “executive offices” then were a room divided by glass partitions. Any audible conversation could be heard in every cubicle.

After he told his mother he had a bris, her outcry reverberated throughout the office: “How could you do this? I tried so hard to protect you!”

Then a bloodcurdling scream: