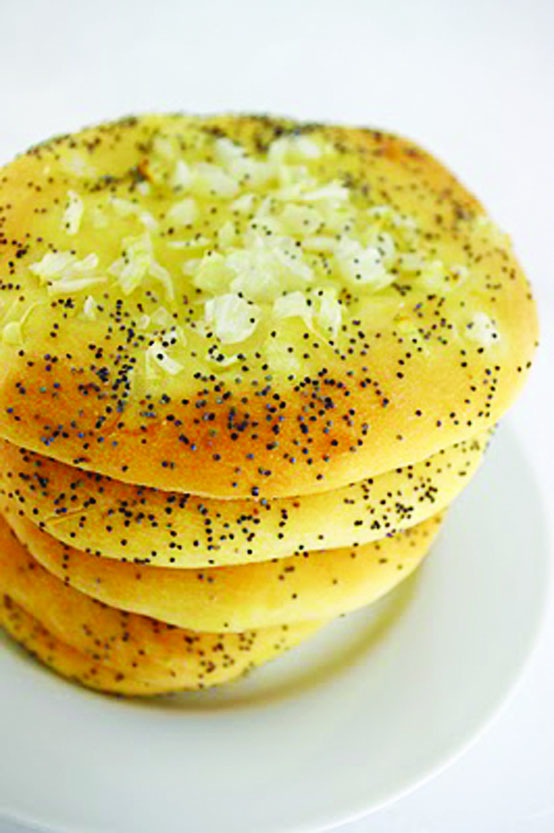 There have been Jewish people living in France for approximately 2000 years, so it’s no wonder that each culture has had an influence on the other. There are countless tales debating the origins of cabbage stews, cholent (from the words chaud  [hot] and lent [slow] — a slow-cooking hot dish) and other common foods. It is often unclear if a dish was invented by Jewish cooks and popularized by gentiles or the other way around. Either way, lots of our traditional Ashkenazic foods can trace their origins to France. Some dishes, however, are uniquely French, such as fricassee and pletzl, a type of flat onion roll. In fact, the Jewish quarter in Paris is colloquially referred to as “the Pletzl”!

This delicious French bread is great for mopping up sauce from your plate!

Place 4 cups of flour into a large mixing bowl. Add the yeast and the sugar. Add the eggs, water, ¼ cup of the vegetable oil and the salt. Mix well and knead for 10 minutes, until smooth, adding more flour if necessary. Transfer the dough to a greased bowl, turning the dough to coat lightly with the oil. Cover and let rise for 1 hour. Preheat the oven to 375° degrees and line 2 baking sheets with parchment paper.

Divide the dough into 12 pieces and form into balls. Roll or flatten each ball to about 6 inches in diameter. Put the dough on the cookie sheets and press down the center to leave a slightly higher edge, about one inch-wide, all around. Brush the dough with cold water and sprinkle some diced onion in each indentation. Brush the edges of the rounds with vegetable oil and sprinkle generously with poppy seeds. Let sit for 15 minutes uncovered.

Bake for 20 minutes until pletzls are golden brown. Serve warm.

This tasty dish probably originated as a Rosh Hashanah tradition but it can be enjoyed year round.

1 onion, peeled and cut into chunks

Sprinkle the chicken, inside and out, with salt and freshly ground pepper to taste and 1/2 teaspoon of the cinnamon.

Put the onions in a roasting pan. Place the chicken on top. Pour the chicken broth and wine over the chicken, and roast in the oven for 45 minutes.

Sprinkle the apples with the remaining cinnamon and sugar. After the chicken has been cooking for 45 minutes, add the apples to the pan. Baste with the wine, and roast for about 45 more minutes, or until the apples are very soft and the chicken is cooked.

Remove from the oven and serve hot.

This popular tart can be served as a side dish along with your entrée or as a light dessert.

12 small (Hungarian or Italian) plums, pitted and cut in half

1 teaspoon cinnamon or more, to taste

Cream the margarine and the 3/4 cup of sugar. Add the flour, baking powder, eggs and salt and beat to mix well. Batter will be soft.

Spoon the batter into an ungreased 9” springform pan or 9” quiche dish. Arrange the plum halves or slices on the batter. Mix the cinnamon with the remaining sugar and sprinkle over the top.

Bake for 40 to 50 minutes, until a cake tester inserted in the center comes out clean. Remove from the oven and let cool; refrigerate or freeze if desired. Serves 8.

Bosc pears were often put into kugel in France. Some, like this version, include onions, which add a savory dimension to the sweetness of the fruit and the dough.

Preheat the oven to 350° and grease a 9-inch springform pan with 2 tablespoons of the oil.

Peel the pears and cut into cubes.

Heat the remaining 3 tablespoons oil over medium-high heat in a frying pan. Lightly sauté the onions until they are translucent. Remove from the heat, salt to taste and let them cool.

Soak the challah in lukewarm water for a few minutes and squeeze out as much water as you can. Put in a large bowl and add ¼ cup of the sugar, and the remaining oil. Stir in the eggs, onions, and half of the diced pears, setting aside the remaining pears for the sauce.

Pour the batter into the springform pan and bake for 2 hours.

While the kugel is baking, make the sauce. In a heavy saucepan put 1 cup of water, the remaining ½ cup of sugar, the prunes, cinnamon, lemon juice, and the remaining diced pears. Cook this mixture over medium-high heat, uncovered, for 30 minutes.

When the kugel is done, remove from the oven and set on a rack to cool for about 20 minutes. Spoon half of the compote over it and allow it to soak into the kugel. Remove from the springform and serve the remaining compote on the side.