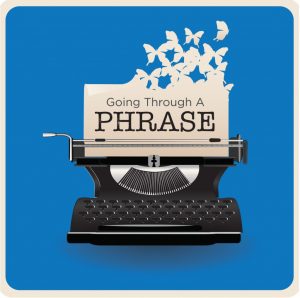 What’s another word for thesaurus?

That joke sums up the boon and bane of thesauruses.

Why not “thesauri”? Garner’s Modern English Usage says that “thesaurus — a book or online resource that supplies synonyms — has long formed the standard plural thesauri. But since about 1960, thesauruses has climbed in frequency, especially in American English.”

The plural thesauri may be heading for extinction, but jokes about verbivorous dinosaurs abound. One cartoon shows a T-Rex saying to spear-wielding hunters, “Your retardation is disadvantageous. I propound you all vamoose with great importunity.”

Most of us discovered the thesaurus in school, using it to make compositions sound more scholarly. “What’s a big word for _______?” Usually, it only made the writing pretentious or nonsensical.

A nastier use is what Chris Sadler, a lecturer at Middlesex University, dubbed Rogeting.

Times Higher Education reported that Sadler couldn’t make sense of something in a student’s paper: “common mature musicians [and] recent liturgy providers are looking to satisfy … Herculean personalized liturgies.” Even by standards of academic gobbledygook, that was a head-scratcher. So he put on his lexicographic Sherlock Holmes hat.

Elementary … Sadler uncovered the original that had been insidiously synonymized: “The current big players and new service providers are looking to supply more powerful personalized services.”

Sadler named this type of back-formation Rogeting: “disguising plagiarism by substituting synonyms, one word at a time with no attempt to understand either the source or target text.”

What a sad monument to Roget, whose magnum opus grew out of his sad life. Roget’s thesaurus, or one of its offspring, is a staple in every literate home. But, as Joshua Kendall wrote (The Man Who Made Lists: Love, Death, Madness, and the Creation of Roget’s Thesaurus), hardly anyone knows “anything about Peter Mark Roget, the eminent nineteenth-century polymath — physician, physiology expert, mathematician, inventor, writer, editor, and chess whiz — and what motivated him to write this immortal book.”

Roget’s family life was a horror story of madness and grief. In response, he imposed a sense of order by creating lists of things and words. At first, he only classified words under categories, similar to the scientific taxonomy of plants and animals. Only later did he add the index — unintentionally making it a tool for padding papers.

Ben Zimmer, lingwizard and language columnist for the Wall St. Journal, wrote in the introduction to the Oxford American Writer’s Thesaurus that it has become fashionable to bash the thesaurus. But it’s not the use of the thesaurus that’s wrong. It’s the misuse and abuse.

When Zimmer talks to student groups about the right way to use a thesaurus, he opens with a cautionary tale: A young man from a wealthy family was sent to a prestigious prep school. But he was clearly in over his head. For his first paper, in a desperate attempt to impress his professor, he consulted the Roget’s Thesaurus his mother had bought for him.

“It was a story about emotions, and I was trying to find a unique way to describe ‘tears’ running down my face. My discussion of ‘lacerates’ falling from my eyes did catch the teacher’s attention, but not in the way I had hoped.”

The professor gave him a big mark. Big, not high. It was a huge zero that showed clear through the rest of the paper. But the student learned a life lesson. “So much for trying to sound smart.”

That student was former President George W. Bush. The same Bush who famously did or didn’t tell an unreliable source, “In Texas, we don’t do nuance.”

Whoever did come up with that line never read Bryan Garner’s works on lexicography — including Black’s Law Dictionary and two books he co-authored with Justice Antonin Scalia on the fine points of legal discourse. Garner was born in Lubbock, Texas and lives in Dallas. And he sure as shooting does nuance.

In an essay titled, “Comment on Tautology and Grammar,” Mark Twain skewered writers who keep repeating the same word, like a verbal tic. It “merely exposes the fact that the writer’s balance at the vocabulary bank has run short and that he is too lazy to replenish it from the thesaurus.”

I use a stack of thesauruses, dictionaries and usage guides to help find the right word. As Twain said, “I like the exact word, and clarity of statement, and here and there a touch of good grammar for picturesqueness.”

And yes, there is another word for thesaurus. Oxford English Dictionary defines it as a “treasury or storehouse of knowledge.”

A thesaurus is a treasure. Don’t squander it. You can take that to the bank.