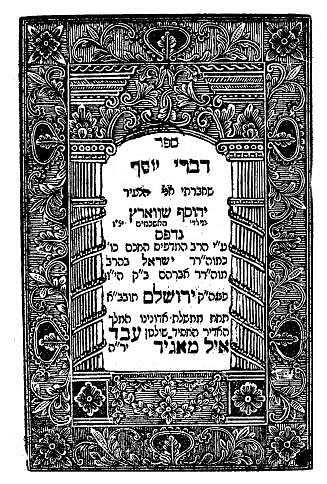 In 5704/1944, Harav Aharon of Belz, zy”a, and his brother, Harav Mordechai of Bilgorei, zy”a, were saved from the Holocaust. On this day they arrived in Beirut, where many Chassidim anxiously awaited them.

Harav Yehosef Schwartz was born on 17 Cheshvan 5565/1804 in Plaus, in the Bayern region in Germany. His father, Harav Menachem, was a talmid of Harav Nosson Adler.

Rav Yehosef wanted to fulfill his life’s dream to settle in Eretz Yisrael. At 22, in 5587/1827, he began to prepare himself with teshuvah for his forthcoming trip. He studied Toras Eretz Yisrael, and in 5589/1829 he published a map of Eretz Yisrael in Lashon Hakodesh and in German.

En route to Eretz Yisrael, Rav Yehosef traveled through Hungary, where illness delayed him for a year. He also spent a long time in Italy, due to war in the region. It was only in the winter of 5593/1833 that he was able to continue his journey.

On 13 Nissan he finally reached the shores of Eretz Yisrael, disembarking in Yaffo. Since there were no organized Jewish communities in Eretz Yisrael at that time, he couldn’t find any way to get to Yerushalayim before Yom Tov, and was forced to remain in Yaffo for the first day of Pesach.

Rav Yehosef writes in his Tevuos Haaretz that he already kept only one day of Yom Tov at that time, so firm was his decision to remain in Eretz Yisrael.

During Chol Hamoed, Rav Yehosef found a way to travel to Yerushalayim.

In Eretz Yisrael, Rav Yehosef dedicated himself totally to Torah. His family deemed it an honor to support him.

His sefer Divrei Yosef contains two parts, Tevuos Haaretz and Tevuos Hashemesh. Later he wrote Pri Tevuah and Pardes as a continuation to the earlier sefarim.

In 1915, Germany carried out its first air raid on Britain during World War I as a pair of Zeppelins dropped bombs onto Great Yarmouth and King’s Lynn in England.

In 1960, the Treaty of Mutual Cooperation and Security between Japan and the United States of America was signed by both countries in Washington, D.C.

In 1981, the United States and Iran signed an accord paving the way for the release of 52 Americans held hostage for more than 14 months.

In 1992, German government and Jewish officials dedicated a Holocaust memorial at the villa on the outskirts of Berlin where the notorious Wannsee Conference had taken place.