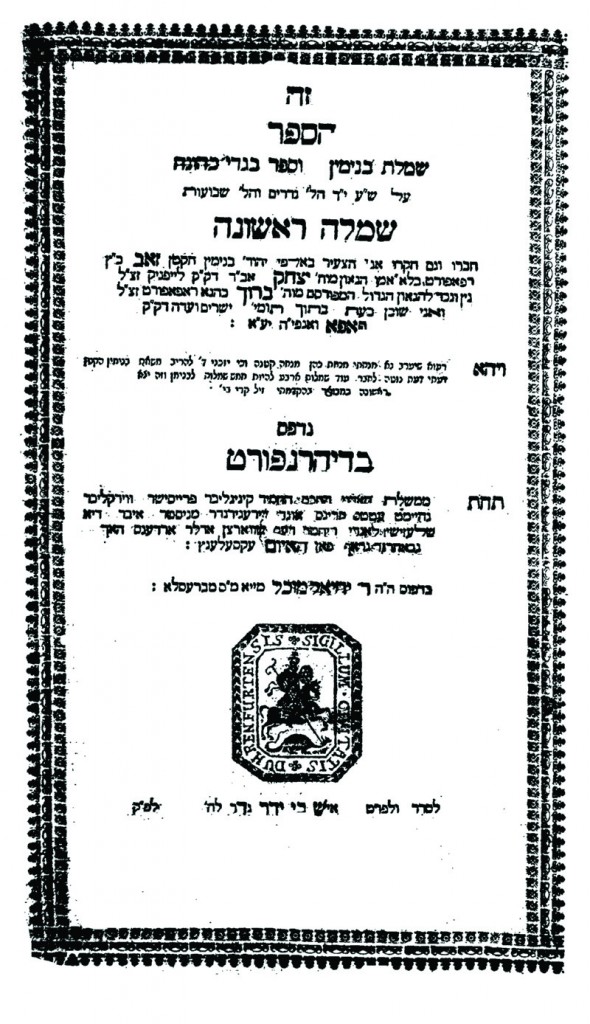 Harav Binyamin Zev Hakohen Rappaport was born in 5514/1754. His father was Harav Yitzchak, the Rav of Leipnik. Reb Yitzchak was descended on his mother’s side from the Rebbe Reb Heshel of Cracow. The mother of Reb Binyamin Zev was the daughter of Harav Gershon Pulitz, who served as Rav in Nikolsburg.

In his youth, Reb Binyamin Zev learned under the tutelage of his father and grandfather.

At the age of 27 he was appointed Rav in Pupa, Hungary, where he served for the next 56 years, until his petirah.

When Reb Binyamin Zev was 34 years old he published his first sefer, Simlas Binyamin U’bigdei Kehunah, on the halachos of nedarim and shevuos.

Twelve years later, Reb Binyamin Zev published the second part of his sefer, under the name Simlah Shniyah, covering many sugyos in Shas.

He was survived by his son Harav Menachem, who was known as a talmid chacham of stature.

In 1413, England’s King Henry IV died; he was succeeded by Henry V.

In 1815, Napoleon Bonaparte returned to Paris after escaping his exile on Elba, beginning his “Hundred Days” rule.

In 1912, a coal mine explosion in McCurtain, Okla., claimed the lives of 73 workers.

In 1922, the decommissioned USS Jupiter, converted into the first U.S. Navy aircraft carrier, was recommissioned as the USS Langley.

In 1933, the state of Florida electrocuted Giuseppe Zangara for the shooting death of Chicago Mayor Anton J. Cermak at a Miami event attended by President-elect Franklin D. Roosevelt, the presumed target, the previous February.

In 1988, 8-year-old DeAndra Anrig found herself airborne when the string of her kite was snagged by an airplane flying over Shoreline Park in Mountain View, Calif. (DeAndra was lifted 10 feet off the ground and carried some 100 feet until she let go; she was not seriously hurt.)

In 1995, in Tokyo, 12 people were killed and more than 5,500 others sickened when packages containing the poisonous gas sarin were leaked on five separate subway trains by Aum Shinrikyo cult members.