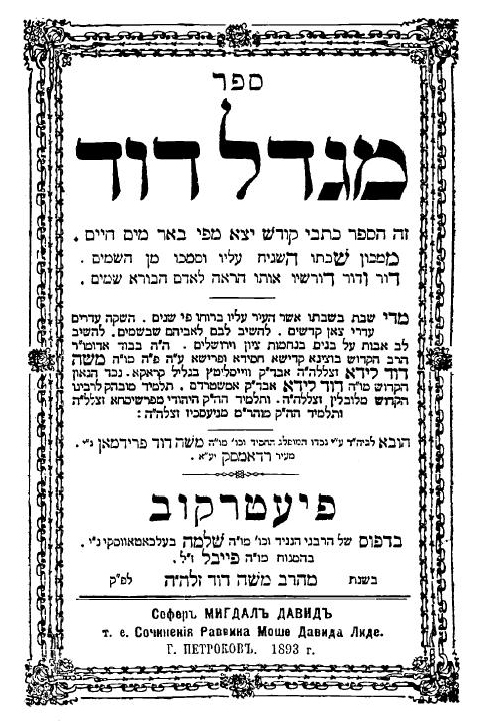 The Mishnah in Taanis enumerates five calamities that took place on this day:

The Romans totally destroyed Yerushalayim. They plowed it under and renamed our holy city Aelia Capitolina.

This is also the day that Yirmiyahu Hanavi was born.

In 5050/1290, in the first-ever national expulsion of Jews, King Edward I expelled all the Jews (numbering approximately 4,000) from England.

In 5252/1492, the Jews of Spain (about 300,000) were expelled by King Ferdinand and Queen Isabella, terminating many centuries of flourishing Jewish life in that country.

In 5754/1994, Arab terrorists exploded a bomb in the Jewish community center (AMIA) in Buenos Aires, Argentina, killing 86 and wounding more than 120.

Harav Moshe David Lida was born in 5540/1780. He was a direct grandson and namesake of Harav Moshe Lida, Rav of Amsterdam, noted mekubal and author of several sefarim.

From his youth, he was noted for his intense tefillah and avodas Hashem.

The Chozeh would send many young chassidim to learn from the ways and teaching of Reb Moshe David. Among his talmidim were Harav Yitzchak of Vorka; Harav Klonimus Kalman, the Ma’or V’shemesh; and Harav Meir of Apta, the Or LaShamayim.

Later, Reb Moshe David was appointed Rav in Weisslitz, near Cracow. Although the town was small, it became famous due to the tzaddik who resided there.

Reb Moshe David was noted for his emotional tefillos and for his tzedakah works. Many traveled to him to receive his brachos, which were known to work wonders.

In the summer of 5588/1828, Reb Moshe David traveled to the resort city Altendorf, in Hungary, where he was suddenly niftar, on the night of Tishah B’Av, at the age of just 48. It has been noted that he thus shares the same yahrtzeit as his Rebbe, the Chozeh of Lublin.

Reb Moshe David was buried there, and his kever became a noted place of tefillah.

His son was Harav Chaim, while his son-in-law, Harav Aryeh Leibish of Zhelichov, succeeded him as Rav in Weisslitz.

Many of his Torah thoughts and talks were compiled and published as Migdal Dovid.

In 1790, a site along the Potomac River was designated the permanent seat of the United States government; the area became Washington, D.C.

In 1935, the first parking meters were installed in Oklahoma City.

In 1945, the United States exploded its first experimental atomic bomb in the desert of Alamogordo, N.M.

In 1964, as he accepted the Republican presidential nomination in San Francisco, Barry M. Goldwater said “extremism in the defense of liberty is no vice” and that “moderation in the pursuit of justice is no virtue.”

In 1969, Apollo 11 blasted off from Cape Kennedy on the first manned mission to the surface of the moon.

In 1999, John F. Kennedy Jr., his wife, Carolyn, and her sister, Lauren Bessette, died when their single-engine plane, piloted by Kennedy, plunged into the Atlantic Ocean near Martha’s Vineyard, Mass.