This Day In History 7 Teves/December 25 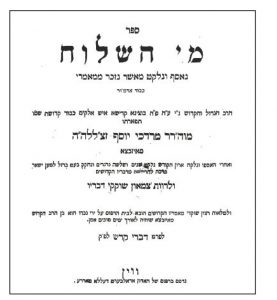 The child was orphaned of his father at a young age, but since his mother’s family was well-to-do, he didn’t lack for care. As a young boy, Mordechai Yosef showed immense potential, and he was renowned for an outstanding memory and for his hasmadah.

Rav Mordechai Yosef married the daughter of Rav Yosef, zt”l, the Rav of Tomashov. After his marriage, already known as a Gadol baTorah, he began to travel to the court of the Rebbe Reb Bunim of Peshischa, zy”a. This was due to the influence of Harav Menachem Mendel of Kotzk, zy”a, who resided at the time in Tomashov.

For nine years Rav Mordechai Yosef stayed in Peshischa, returning home only for short intervals. He was considered one of the leading Chassidim.

After the petirah of the Rebbe Reb Bunim, the Kotzker Rebbe became his successor. Rav Mordechai Yosef was one of the first to follow him.

When the Rebbe moved on to Kotzk, Rav Mordechai Yosef stayed behind in Tomashov, but traveled frequently to Kotzk. He was among the leading Chassidim, very close to the Kotzker Rebbe.

He continued traveling to Kotzk for the next few years, until the Kotzker Rebbe began the period of his detachment. It was at this time that Rav Mordechai Yosef left Kotzk. On Simchas Torah of 5600/1839, he broke away with a group of his followers.

They moved to Wengraub, near Kotzk. Rav Mordechai Yosef remained there for a short time, settling ultimately in Izhbitze. He built up his court, attracting a large contingent of Chassidim from Kotzk.

Rav Mordechai Yosef led his Chassidim with compassion, like a father. Aside for his concern for their growth in ruchniyus, he was also involved in their material welfare.

For 13 years Rav Mordechai Yosef led his flock, disregarding the pains he suffered which made him weaker and weaker. In the beginning of 5614 his condition worsened from day to day, until he was niftar on 7 Teves.

After his petirah, many of Rav Mordechai Yosef’s divrei Torah were compiled under the name Mei Hashiloach.

In 1776, Gen. George Washington and his troops crossed the Delaware River for a surprise attack against Hessian forces at Trenton, New Jersey, during the American Revolutionary War.

In 1868, U.S. President Andrew Johnson granted an unconditional pardon to all persons involved in the Southern rebellion that resulted in the Civil War.

In 1979, the U.S.S.R. invaded Afghanistan in a bid to halt civil war and protect U.S.S.R. interests.

In 1998, seven days into their journey, Richard Branson, Steve Fossett and Per Lindstrand of Sweden gave up their attempt to make the first nonstop round-the-world balloon flight. They ditched near Hawaii.