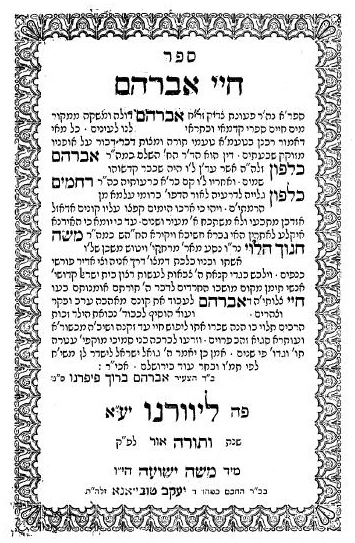 Harav Avraham Kalfon was born in Libya in 5495/1735. His father was Rav Refael. The family was a distinguished one, their lineage stemming from Parnassim and Dayanim.

He was fluent in both nigleh and nistar.

Harav Avraham was interested in history and searched through archives for manuscripts, becoming fluent in the Jewish history of ancient Tripoli.

He had a special relationship with the Chidah; the two exchanged many letters. In 5564/1804, Harav Avraham went to Livorno, living there near the Chida for a year and a half.

Harav Avraham was renowned for his acts of tzedakah, especially for needy talmidei chachamim.

His love of Eretz Yisrael impelled him to move there in 5566/1806. He settled in Tzefas, where he remained for the rest of his life.

He wrote numerous sefarim. The best known is Chayei Avraham, on the reasons for the mitzvos.

In 1608, John Smith was elected president of the Jamestown Colony council in Virginia.

In 1813, an American naval force commanded by Oliver H. Perry defeated the British in the Battle of Lake Erie during the War of 1812. (Afterward, Perry sent out the message, “We have met the enemy and they are ours.”)

In 1846, Elias Howe received a patent for his sewing machine.

In 1945,Vidkun Quisling was sentenced to death in Norway for collaborating with the Nazis. He was executed by firing squad in October 1945.

In 1962, the U.S. Supreme Court ordered the University of Mississippi to admit James Meredith, a black student.

In 1979, four Puerto Rican nationalists imprisoned for a 1954 attack on the House of Representatives and a 1950 attempt on the life of President Harry S. Truman were freed from prison after being granted clemency by President Jimmy Carter.

In 1990, the main building at Ellis Island was reopened to the public as the Ellis Island Immigration Museum.