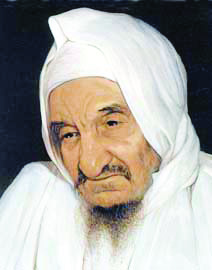 The Baba Sali was born on Rosh Hashanah of 5650/1889 into the illustrious Abuchatzeira family, Rabbinic leaders of the Moroccan city of Tafilalet for over a century.

The young Rav Yisrael observed how his father, Rav Masoud, would lock himself in an attic for hours, deep in study of both the revealed and hidden Torah. His brother Rav Dovid, 24 years his senior, never slept in a bed; rather, he would doze off a bit at the table, over his sefer.

Unlike most children his age, the young Rav Yisrael never longed for toys or sweets. All he wanted was a new siddur. He learned to daven with great devotion.

After his bar mitzvah, he went on to master Shas with many Rishonim and became expert in such areas as shechitah, milah and safrus.

Most of Moroccan Jewry began emigrating to Eretz Yisrael after 1948. Rav Yisrael’s brother Rav Yitzchak founded a kehillah in Ramle, and urged Rav Yisrael to share the challenge of reorienting Moroccan Jewry to their new environment.

In Elul 5711/1951, Rav Yisrael boarded a ship for Eretz Yisrael, which arrived on Erev Rosh Hashanah at the Haifa port.

Rav Yisrael went to Yerushalayim, where he intended to settle. He was deeply pained by the spiritual condition of Yerushalayim at that time. After much thought, he decided to leave Eretz Yisrael.

At first, he went to France. In 5713/1953 he decided to return to Tafilalet, which had a then-stable government.

Rav Yisrael lived near his son, Rav Meir, who served as the regional Rabbi and Dayan. In 5723/1963 Rav Yisrael turned 73, the age when both his father and grandfather were niftar. That year Rav Yisrael did not travel, so that if he was niftar he could be buried alongside them in Tafilalet, in accordance with Chazal’s teaching that when a man reaches the life span of his father, he should prepare himself for death.

But the year passed and Rav Yisrael was healthy and vigorous. In 5724/1964 he moved back to Eretz Yisrael and settled in Netivot, a small city in the Negev with a largely Moroccan-Jewish population.

From the moment Rav Yisrael arrived in Netivot, it became a magnet for people in need of a tzaddik’s wise counsel.

The Baba Sali had a profound impact on Netivot and its surrounding settlements. Many residents of these towns changed their lifestyle and began to observe mitzvos.

Rav Yisrael had seen Rav Meir as his replacement, to continue the family tradition. After Rav Meir’s death on Chol Hamoed Pesach 5743/1983, it was clear that Rav Yisrael was not well. He was rarely able to receive the public and would often remain in bed. On 4 Shevat 5744/1984, he returned his pure soul to its Maker.

In 1914, Ford Motor Co. greatly improved its assembly-line operation by using an endless chain to pull each chassis at its Highland Park plant.

In 1966, Fifth Avenue and Madison Avenue in Manhattan were converted from two-way to one-way streets to improve traffic flow. (To this day, vehicles head south on Fifth Avenue, while traveling north on Madison Avenue.)

In 1994, United States President Bill Clinton and Russian President Boris Yeltsin signed an accord to stop aiming missiles at any nation. The leaders joined Ukrainian President Leonid Kravchuk in signing an accord to dismantle the nuclear arsenal of Ukraine.