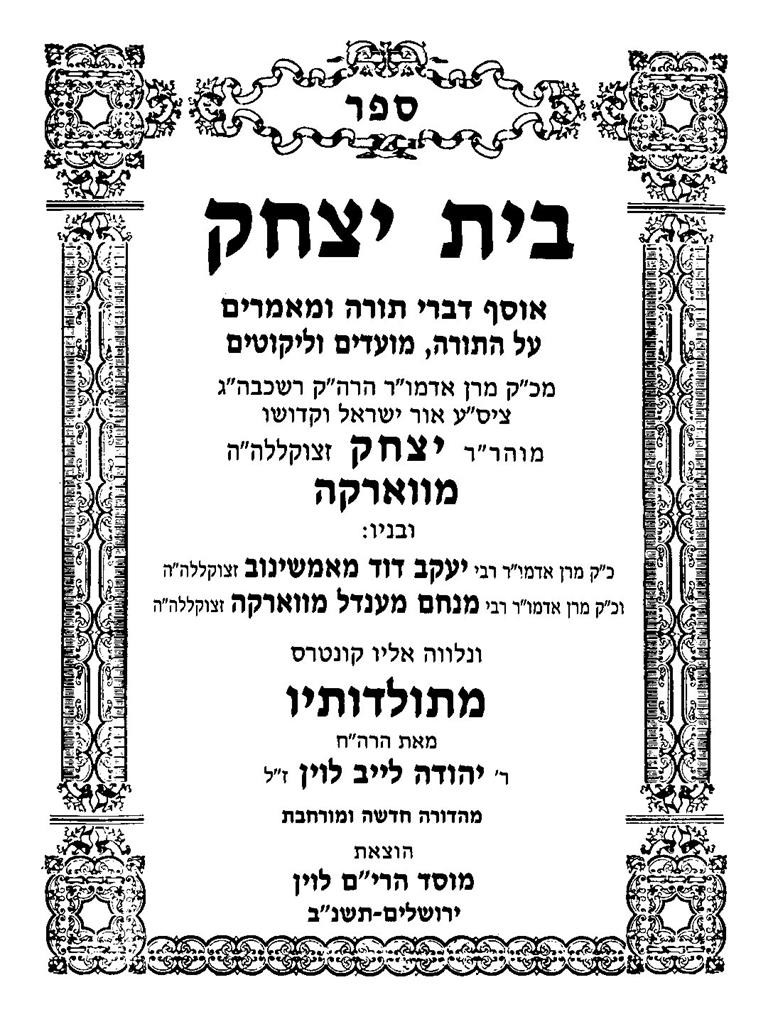 In 3411/351 B.C.E., the last prophecy of the last Navi, Zechariah, was that the Jews not mourn on Tishah B’Av during the Second Beis Hamikdash.

Harav Yaakov Dovid was born in Zarik in 5574/1814. His father was Harav Yisrael Yitzchak, zt”l, the Alter Rebbe of Vorka. When Reb Yaakov Dovid was about 15, they moved to Vorka from Lelov.
Reb Yaakov Dovid was already known in his youth for his diligence and brilliance. He was erudite in all aspects of the Torah, especially in hilchos Shabbos.
He became the son-in-law of Reb Shmuel Partzover, one of his father’s Chassidim. After his chasunah, with the support of his father-in-law, he was able to toil in Torah and reach great heights.
Eventually he was appointed Rav in the town of Gorbachov. After a short while he moved to Peshischa, and then, after only a year and a half, he became Rav in Amshinov.
Reb Yaakov Dovid’s Rebbetzin, Sarah Leah, passed away just after marrying off their daughter, Feige.
He remarried; his second Rebbetzin was the daughter of Reb Yaakov of Zarnavtza, a devoted Vorker Chassid.
In 5608/1848, Reb Yitzchak, the Alter Rebbe of Vorka, was niftar. His younger son, Reb Menachem Mendel, succeeded him, after which Reb Yaakov Dovid received Chassidim in his own court in Amshinov.
Like his father, Reb Yaakov Dovid knew no rest when it came to klal matters. The Rebbe commented that he saw his father at his side urging him to continue to plead on behalf of Klal Yisrael.
The Amshinover Rebbe also invested great efforts in the mitzvah of pidyon shevuyim.
He was revered by all contemporary Rebbes and Rabbanim, who cherished him for his unique personality and tzidkus.
During the last years of his life, when he experienced severe weakness, he traveled to Meran, Italy, seeking a cure. On 4 Kislev he was niftar in Italy and was brought back to Amshinov for kevurah.
His divrei Torah were collected and published in Beis Yitzchak, Niflaos Yitzchak and in Ohalei Tzaddikim.
Yehi zichro baruch.

In 1945, the United Nations Educational, Scientific and Cultural Organization (UNESCO) was founded at the conclusion of a conference in London.

In 1993, President Bill Clinton signed the Religious Freedom Restoration Act, making it harder for government to interfere with religious practices.