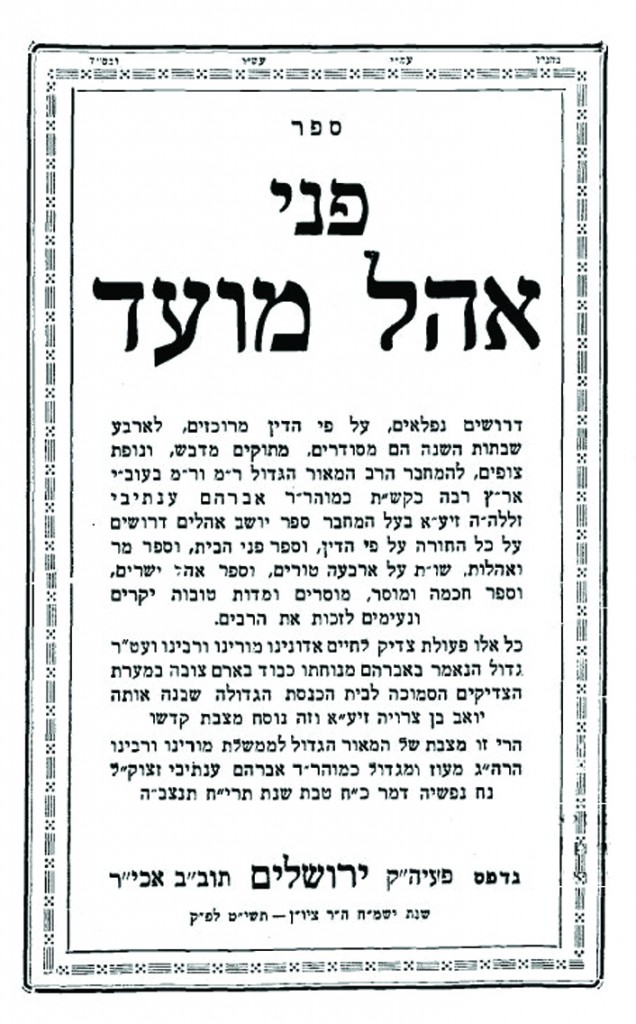 Harav Avraham Entebi was born in 5525/1765. His father, Rav Yitzchak, one of the Gedolim of the generation, was a member of the elite group of Rabbanim in Aram Tzova which included Harav Tzadkah Chutzin, Harav Yehudah Yom Tov Katzin, Harav Yitzchak Brachah and others.

Rav Avraham studied under the tutelage of his father.

Rav Avraham stood out among the many Torah leaders in his generation for his sharpness, clarity in learning and his psak. Many halachic she’eilos were addressed to him from across the Torah world.

Rav Avraham was the Rosh Yeshivah and Rav in Aram Tzova for over 40 years. As Rav, he showed his authority and never feared ruling in favor of the underdog, even against affluent members of the kehillah.

Rav Avraham wrote many sefarim, a number of which were published. These include: Yoshev Ohalim on the Torah; Pnei Habayis on the Toras Habayis of the Rashba; Pnei Habayis on the commentary of the Beis Yosef on Choshen Mishpat; She’eilos U’teshuvos Mor Ve’ohalos on the four sections of Shulchan Aruch; Ohel Yesharim; Chachmah U’mussar, his mussar work; and Pnei Ohel Moed on Even Ha’ezer. Many of his other sefarim were never published.

In 1861, Florida became the third state to secede from the Union.

In 1863, the London Underground had its beginnings as the Metropolitan, the world’s first underground passenger railway, opened to the public with service between Paddington and Farringdon Street.

In 1901, the Spindletop oil field in Beaumont, Texas, produced the Lucas Gusher, heralding the start of the Texas oil boom.

In 1920, the League of Nations was established as the Treaty of Versailles went into effect.

In 1946, the first General Assembly of the United Nations convened in London. Fifty-one nations were represented.

In 1962, an ice avalanche on Nevado Huascaran in Peru resulted in some 4,000 deaths.

In 1984, the United States and the Vatican established full diplomatic relations for the first time in more than a century.

In 2005, a landslide occurred in La Conchita, California, killing 10 people, injuring many more and closing U.S. Route 101, the main coastal corridor between San Francisco and Los Angeles, for 10 days.