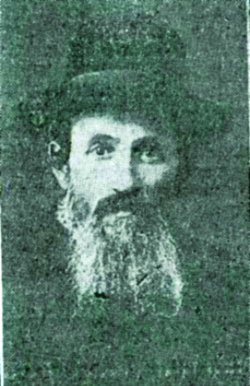 Besides his activities on behalf of Yiddishkeit in America, Reb Yisrael also supported the beis medrash of his father in Tzfas, sending large sums of money for its upkeep. He founded and sponsored an orphanage in Tzfas.

Reb Yisrael was niftar on 3 Cheshvan 5703/1942 at the age of 66. He was buried in the Beth David Cemetery in Long Island, where an ohel was built on his kever.

A few years ago, a group of askanim traveled to the kever of the Rebbe; finding it in a very neglected condition they undertook to renovate it. They have also organized a nesiah to the kever in honor of the yahrtzeit.

In 1777, the second Battle of Saratoga began during the American Revolution. (British forces under Gen. John Burgoyne surrendered 10 days later.)

In 1929, former Interior Secretary Albert B. Fall, one of the main figures of the Teapot Dome scandal, went on trial in Washington, D.C., charged with accepting a bribe from oil tycoon Edward L. Doheny. (Fall was found guilty and sentenced to a year in prison and fined $100,000; he ended up serving nine months. Ironically, Doheny was acquitted at trial of offering the bribe that Fall was convicted of taking.)

In 1985, Palestinian gunmen hijacked the Italian cruise ship Achille Lauro in the Mediterranean. (The hijackers, who killed Jewish American tourist Leon Klinghoffer, surrendered two days after taking over the ship.)

In 1992, trade representatives of the United States, Canada and Mexico initialed the North American Free Trade Agreement during a ceremony in San Antonio, Texas.

In 2001, the current war in Afghanistan started as the United States and Britain launched air attacks against military targets and Osama bin Laden’s training camps in the wake of the Sept. 11 attacks.