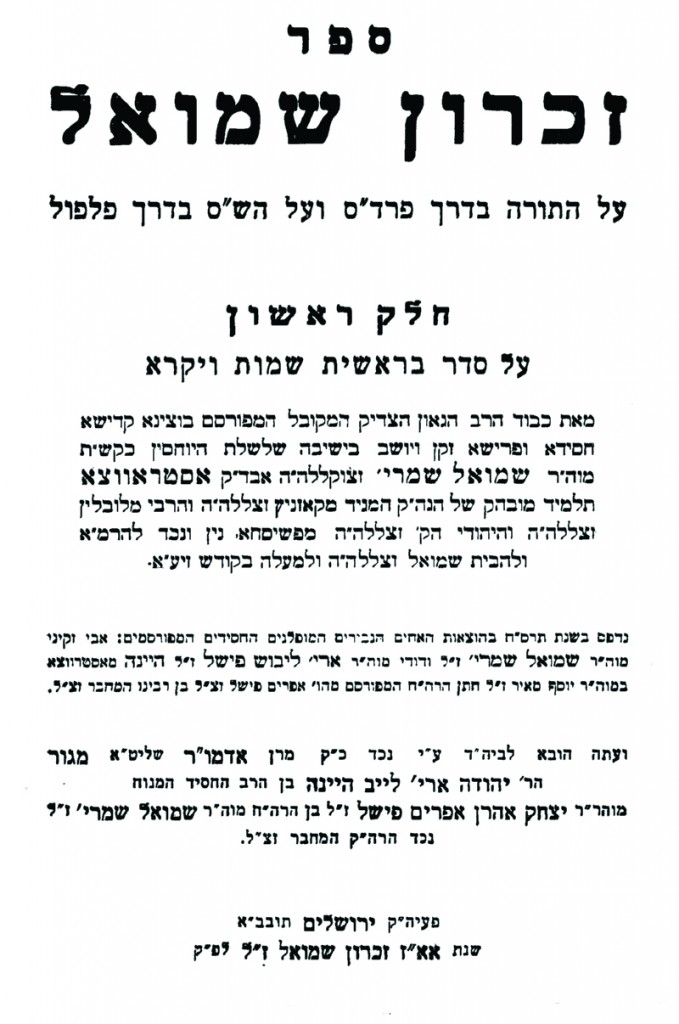 In 5701/1941, within a few days of their effort to invade Russian-occupied territory, the Nazis overran Vilna, Kovno, Bialystok and Riga, thereby closing the famed Slabodka and Telshe yeshivos, among others. The invasion brought about massive pogroms by the local populations in which thousands were killed.

He was the son of Harav Yaakov of Zhvalin, a grandson of Harav Shmuel of Fiorda, the mechaber of Beis Shmuel on Even Haezer. He was also a descendant of the Rema.

Reb Shmuel was a close talmid of the Kozhnitzer Maggid, the Chozeh of Lublin and the Yehudi Hakadosh of Peshischa.

After their petirah, he traveled to the court of Harav Yerachmiel of Peshischa and to Harav Moshe Elyakim Biyeh of Kozhnitz.

Reb Shmuel served as Rav in Ostrovtza for close to 50 years. He also served as Rosh Yeshivah in the city, teaching multitudes of bachurim. Among his more famous talmidim were Harav Shimshon, Rav of Kintzk; Harav Dov Berish, Rav of Zelichov; and Harav Moshe Yehudah, Rav of Konstantin.

He wrote many chiddushim, on the Torah and in drush, including many divrei Torah from his Rebbes that were previously unknown; he serves as the only source for these divrei Torah. These were later published, some 80 years after his petirah, by his grandsons, under the name Zichron Shmuel.

The sefer was held in high esteem, and was printed with the haskamos of many of the generation’s foremost Gedolim including Harav Meir Yechiel of Ostrovtza; the Knesses Yechezkel of Radomsk; Harav Shalom Mordechai of Brezhan and others.

In 1776, Richard Henry Lee of Virginia proposed to the Continental Congress a resolution stating “That these United Colonies are, and of right ought to be, free and independent States, that they are absolved from all allegiance to the British Crown.”

In 1862, William Bruce Mumford, a Confederate loyalist, was hanged at the order of Union military authorities for tearing down a U.S. flag that had been flying over the New Orleans mint shortly before the city was occupied by the North.

In 1863, French forces occupied Mexico City during the Franco-Mexican War.

In 1892, Homer Plessy, a “Creole of color,” was fined for refusing to leave a whites-only car of the East Louisiana Railroad. (Ruling on his case, the U.S. Supreme Court upheld “separate but equal” racial segregation, which it overturned in 1954.)

In 1929, the sovereign state of Vatican City came into existence as copies of the Lateran Treaty were exchanged in Rome.

In 1942, the World War II Battle of Midway ended in a decisive victory for American forces over the Imperial Japanese.

In 1993, the U.S. Supreme Court ruled that religious groups can sometimes meet on school property after hours.