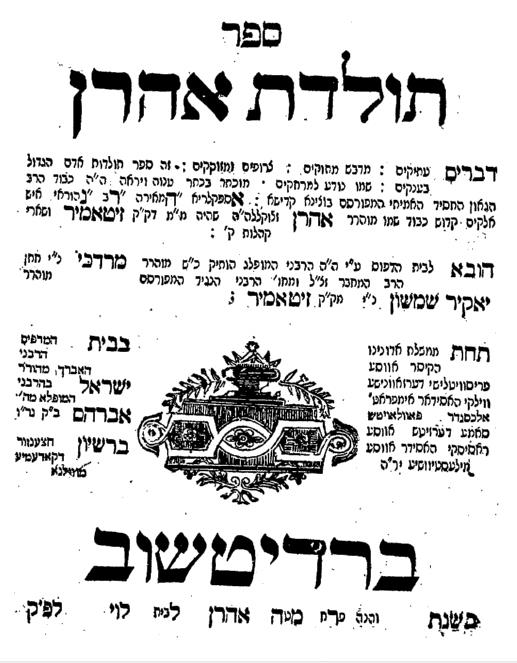 Reb Aharon of Zhitomir (son of Rav Mordechai) was considered an iluy and an outstanding talmid chacham; despite this, he supported himself by working rather than taking a Rabbinical position. He was renowned for his fiery drashos, mostly of chizuk in limud haTorah.

Reb Aharon was renowed as a tzaddik and a k’dosh elyon. The Ohev Yisrael of Apta, zy”a; Harav Yisrael of Pikov, zy”a, the son of Harav Levi Yitzchak of Berditchev; and Harav Mordechai of Chernobyl, zy”a, all wrote warm haskamos to Toldos Aharon, attesting to the mechaber’s great tzidkus and high madreigos.

He was the maggid in Zhitomir for three years. Afterwards he moved to Hungary, where he was active in spreading Toras Hachassidus, especially in the cities of Krali and Ashver where he resided.

Wherever he lived, he gave drashos that aroused the hearts of the listeners to improve in Torah and kiyum hamitzvos. He was zocheh to see the fruits of his labor, with many doing teshuvah after hearing his drashos, and some even becoming his Chassidim.

Reb Aharon was niftar on 26 Tishrei, a day after the yahrtzeit of his Rebbe, Rav Levi Yitzchak of Berditchev. He was buried in Zhitomir.

It is said that when his talmidim saw that his end was nearing, they began to cry.

“Why are you crying?” Reb Aharon asked them. “The end of every person is death.”

“How can we not cry, when our Rebbe is leaving us?” the talmidim sobbed. “We will be left a flock without a shepherd. The other tzaddikim of the generation are more hidden in their avodas Hashem, unlike our Rebbe, to whose derech in avodas Hashem we have become accustomed.”

“Know then,” Reb Aharon answered, “that before Moshiach comes there will be tzaddikim greater than I, and whatever they do, they will be meyached more yichudim than we accomplished even in all our learning and davening!”

His divrei Torah were written down by one of his closest talmidim, Reb Levi of Zhitomir, after every Shabbos and Yom Tov. Reb Aharon himself edited these notes. Toldos Aharon was first printed in Berditchev shortly after his petirah in 5577 by his son-in-law, Reb Mordechai, and his son-in-law’s father, the nagid Reb Yakir Shimshom of Zhitomir. Other divrei Torah of Reb Aharon are printed in Pisgamin Kaddishin.

In 1888, the public was first admitted to the Washington Monument, for which there had been plans for more than a century.

In 1974, businessman Oskar Schindler, credited with saving about 1,200 Jews during the Holocaust, died in Frankfurt, West Germany. At his request, he was buried in Yerushalayim.

In 2001, in the 2001 anthrax attacks, the second mailing of anthrax letters from Trenton, New Jersey, took place.