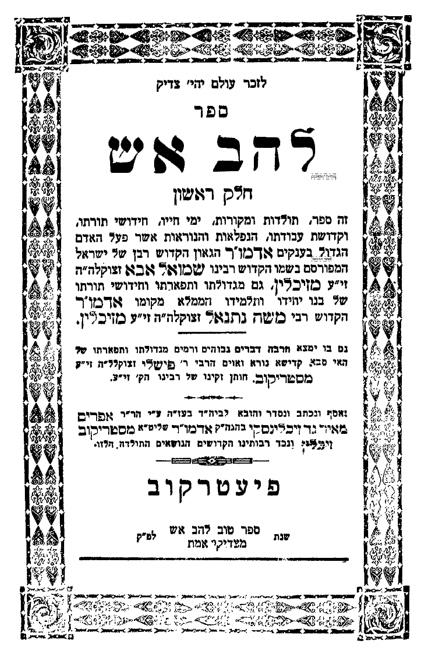 Second day of Creation: Hashem separated the upper waters and the lower waters. According to the Midrash, Gehinnom was created on this date as well.

In 5108/1348, the Jews of Zurich were accused of causing the Black Plague. Some were burned and the rest expelled. Hy”d.

1758/1845, Rav Chaim Pinto of Mogador. The famous Pinto family was dispersed worldwide — primarily to Morocco, the Ottoman Empire, and Holland — after 1497 when Portugal expelled its Jews.

Rav Shmuel Abba was born in Loibitch in 5570/1810. His father was Rav Zelig, son-in-law of Rav Fishele of Strikov. Prior to his birth, his parents received a brachah from the Kozhnitzer Maggid to have a son who will “light up the world.”

He grew up under the wing of his revered grandfather, Reb Fishele, and visited the Rebbe Reb Bunim of Peshischa — who was very close to his grandfather — a number of times. In addition, he was a talmid of his uncle, Rav Yaakov of Brezhan, the son of Reb Fishele.

He learned Toras Hanigleh from Harav Aryeh Leib Charif of Plotzk and from Harav Moshe Aharon Zilberberg of Kutna, the Zayis Raanan.

At a young age Reb Shmuel Abba became known as the iluy of Loibitch. He was famous for his unique blend of fiery avodas Hashem, Chassidus, and vast knowledge and diligence in Torah.

After his marriage, Reb Shmuel Abba moved to his father-in-law’s town of Bodzanov. There, talmidim and Chassidim began flocking to him; with time, numerous former Chassidim of his late zeide became attached to him and they crowned him their Rebbe.

In 5604/1844, Reb Shmuel Abba moved to Zichlin. There he further expanded the scope of his Chassidus, and he became one of the revered Rebbes of his time.

The Zichliner Rebbe was known as a poel yeshuos and baal mofes. Interestingly, he despised doctors and their opinions, feeling that refuah is up to Hashem Alone; during his own illnesses he never allowed a doctor to see him.

Many of his mofsim and divrei Torah were printed in Lahav Eish by his grandson, Efraim Meir Gad Zichlinski.

Reb Shmuel Abba was arrested and jailed in the great Lontchitz prison because of his outspokenness against the Russian authorities. He was released after three weeks.

He was succeeded by Reb Moshe Nesanel, his only son.

In 1813, an American naval force commanded by Oliver H. Perry defeated the British in the Battle of Lake Erie during the War of 1812. (Afterward, Perry sent out the message, “We have met the enemy and they are ours.”)

In 1846, Elias Howe received a patent for his sewing machine.

In 1974, the West African country of Guinea-Bissau became fully independent of Portugal.