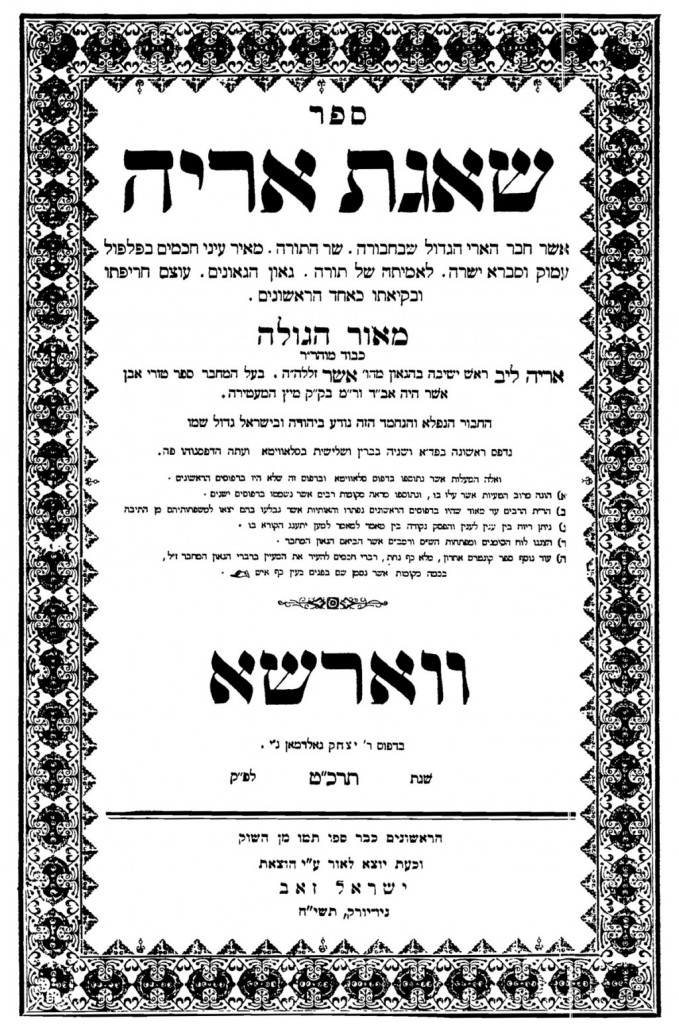 When the entourage passed the R. Hoe and Company factory, its non-Jewish workers threw refuse and rocks at the bier. Local police arrived at the scene, and a terrible fight, heavy with anti-Semitic overtones, ensued. More than 300 Jews were hospitalized as a result.

Harav Aryeh Leib was born in 5455/1695, in Lithuania. His father, Harav Asher, was Rav in Pinsk and one of the leading Rabbanim of his time.

His first post was as Rosh Yeshivah in Volozhin. One of his prize talmidim was Harav Chaim Volozhiner.

Interestingly, his sefer Shaagas Aryeh was already published at this time, yet he was not given a fitting post and was forced to constantly move on.

It is related that once, Reb Aryeh Leib was in Frankfurt and he took lodgings at the home of Harav Pinchas Horowitz, the author of Hafla’ah and Panim Yafos. He didn’t recognize his guest, and offered him a bed. The “simple” guest asked for three Gemaros for the night — Yevamos, Kesubos and Kiddushin. The Hafla’ah was surprised, but willingly filled his guest’s request. Some hours later, the Hafla’ah peeked into the room of his guest and saw him laboring over the Gemara. By morning, he had finished all three masechtos — no small feat by anyone’s standards! The Hafla’ah began to ask him questions on his learning. Within minutes, he realized that this guest was none other than Reb Aryeh Leib, the Shaagas Aryeh.

When he accepted the position of Rav in Metz he was nearly 70 years old. The leaders of the community expressed doubts because he was already an elderly man. He asked them how long they expected a Rav to last, and they answered, for about 20 years. Indeed, he was niftar some 20 years later, when he was 90 years old.

A few months before his petirah, Reb Aryeh Leib invited the community for a siyum haShas. He was in especially high spirits at this siyum. When he was asked what the reason was for this, he explained that this was his thousandth siyum on the Shas.

He wrote Shaagas Aryeh; Gevuras Ari on maseches Yoma, and Turei Even on maseches Rosh Hashanah.

In 1608, the city of Quebec was founded by Samuel de Champlain.

In 1775, Gen. George Washington took command of the Continental Army at Cambridge, Mass.

In 1863, the three-day Civil War Battle of Gettysburg in Pennsylvania ended in a major victory for the North as Confederate troops failed to breach Union positions during an assault known as Pickett’s Charge.

In 1898, the U.S. Navy defeated a Spanish fleet outside Santiago Bay in Cuba during the Spanish-American War.

In 1913, during a 50th anniversary reunion at Gettysburg, Pa., Civil War veterans re-enacted Pickett’s Charge, which ended with embraces and handshakes between the former enemies.

In 1938, President Franklin D. Roosevelt marked the 75th anniversary of the Battle of Gettysburg by dedicating the Eternal Light Peace Memorial.

In 1950, the first carrier strikes of the Korean War took place as the USS Valley Forge and the HMS Triumph sent fighter planes against North Korean targets.

In 1988, the USS Vincennes shot down an Iran Air jetliner over the Persian Gulf, killing all 290 people aboard.

Ten years ago: The U.S. put a $25 million bounty on Saddam Hussein, and $15 million apiece for his two sons. (The $30 million reward for Odai and Qusai Hussein went to a tipster whose information led U.S. troops to their hideout, where the brothers were killed in a gun battle.)

Five years ago: The Pentagon announced it had extended the tour of 2,200 Marines in Afghanistan, after insisting for months the unit would come home on time.

One year ago: A federal judge in Amarillo, Texas, found Clayton F. Osbon, a JetBlue Airways pilot who’d left the cockpit during a flight and screamed about religion and terrorists, not guilty by reason of insanity of interfering with a flight crew.