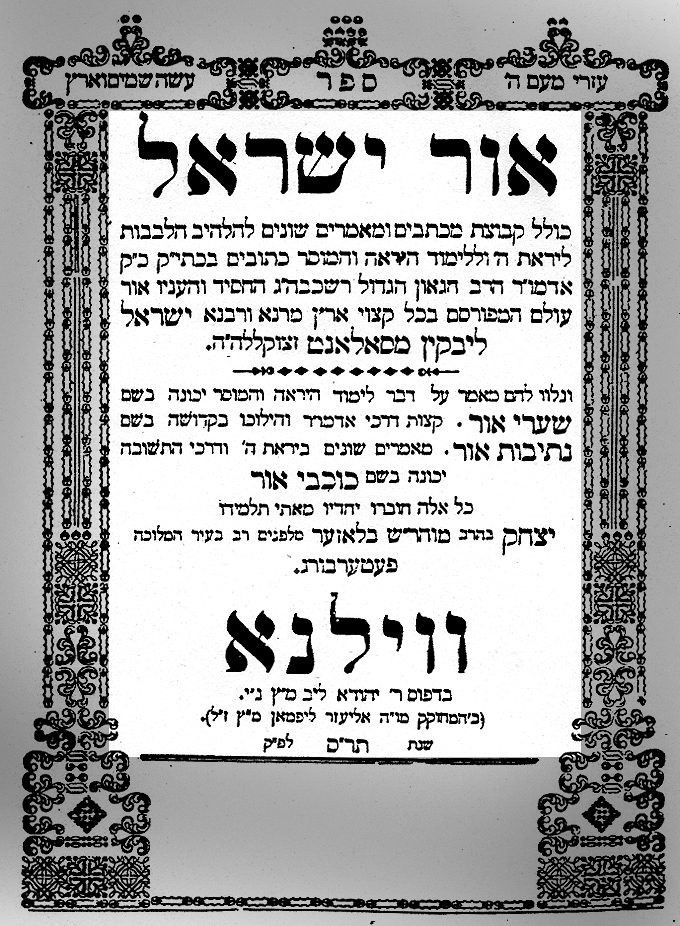 In 5591/1831, the French government provided financial support to Jewish institutions on a par with Christian institutions.

Harav Yisrael Lipkin was born in 5570/1809 in Zager. His father was Harav Zev Wolf, the Rav of the town, mechaber of Hagahos Ben Aryeh, printed at the back of the Gemara.

As a child, Yisrael gained a reputation as an iluy; by age 10 he was delivering drashos to the talmidei chachamim in the local shul. When he was 12, his father brought him to Salant to learn under its Rav, Harav Tzvi Hirsch Broide, known for his tzidkus and brilliance in Torah.

At age 14, Rav Yisrael married the daughter of Harav Yaakov Eisenstein of Salant.

His primary Rebbe was Harav Zundel of Salant, who, despite his greatness in Torah, appeared to be a simple Jew and spent hours alone in the forest. Rav Yisrael would follow him secretly, watching as Rav Zundel studied mussar and conversed with Hashem. Once Rav Zundel noticed Rav Yisrael and said to him: “Yisrael, learn mussar, and you will be a yerei Shamayim.” From then on he became Rav Zundel’s talmid.

Rav Yisrael decided that the times in which he lived did not allow him to remain a nistar. “One has to be ready to give up even one’s own Olam Haba in order to help others, to increase kvod Shamayim…” Rav Yisrael writes.

As Rosh Yeshivah in one of Vilna’s yeshivos, he realized how the haskalah movement was breaching the walls of our most hallowed institutions, and he fought it with a holy fire. He began publishing Hatevunah to fortify the yiras Shamayim of the Jews. By initiating a particular derech in mussar-study, he saved many from the temptations of haskalah. In addition, the fiery shmuessen that he delivered to the masses melted his listeners’ hearts and drew them closer to Yiddishkeit.

Rav Yisrael drew the anger of the ruling Russian authorities who attempted to confer legitimacy on the Reform movement by forcing Rav Yisrael to accept their “rabbinical” candidates. Rav Yisrael fled Vilna and settled in Kovna, where he further expanded the mussar movement and opened a yeshivah.

After a number of years he moved to Germany, which had been spiritually ravaged by the Reform movement and was on a very low level of mitzvah observance. From 5617/1857 until his petirah, Rav Yisrael lived in Koenigsburg, and although he kept in constant mail contact with his talmidim, he remained there for the rest of his life.

In 1783, Britain’s King George III proclaimed a formal cessation of hostilities in the American Revolutionary War.

In 1789, electors chose George Washington to be the first president of the United States.

In 1919, Congress established the U.S. Navy Distinguished Service Medal and the Navy Cross.

In 1962, a rare conjunction of the sun, the moon, Mercury, Venus, Earth, Mars, Jupiter and Saturn occurred.