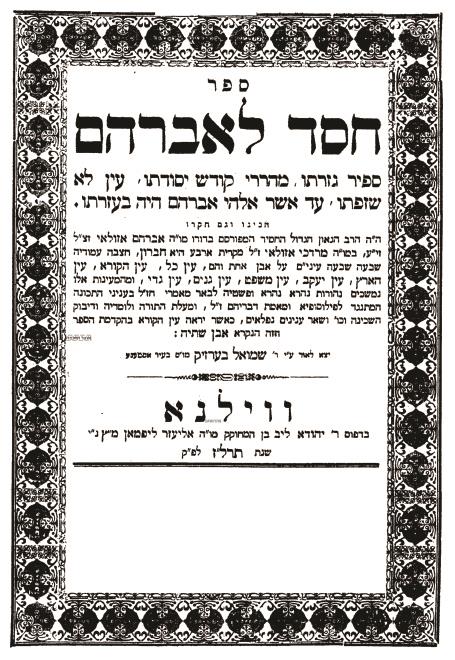 Until the age of 40, Rav Avraham resided in Fez. Then, in 5360/1600, he finally managed to realize his lifelong dream and set out for Eretz Yisrael.

En route, a storm struck and the ship was wrecked. Although the passengers were rescued, all of Reb Avraham’s chiddushim were lost. Instead of falling into despair, Reb Avraham said, “The loss of our possessions expiates our sins. If not for the miracle that occurred to us, our fate would have been the same as that of our belongings. Let us thank Hashem for rescuing us, and accept our lot with love. As soon as we reach Eretz Yisrael, I will compose new chiddushim.”

Reb Avraham’s great-great-grandson, Harav Chaim Yosef David Azulai (the Chida), relates this episode in Shem HaGedolim, adding that from then on Reb Avraham commemorated this miracle by signing his name in the form of a ship.

After the voyage, Reb Avraham settled in Chevron.

In the beis medrash in Chevron, Reb Avraham once found a number of loose pages in a sefer. They turned out to be a manuscript in the handwriting of the Arizal. After that, Reb Avraham searched through the city’s batei medrash and found many more such pages. Reb Avraham said that to some extent, the pain of losing his chiddushim was lessened by finding these previously unknown manuscripts.

However, Reb Avraham’s peaceful life in Chevron did not last long. An epidemic broke out, forcing him and his family to move to Yerushalayim. To their dismay, the plague spread to Yerushalayim, too, and they were forced to move on again, to Aza (Gaza).

Reb Avraham made a neder that if Hashem would protect him and he would return safely to Chevron, he would write a sefer of all his chiddushim over the years.

In Aza, Rav Avraham wrote Baalei Bris Avraham, a peirush on the whole Tanach, and Chessed L’Avraham, which contains deep, kabbalistic explanations based mainly on the works of the Ramak and the Arizal.

When the plague finally passed, Reb Avraham returned to Chevron, where he lived until his passing on 24 Cheshvan, 5404/1643. Reb Avraham was buried in the old cemetery of Chevron.