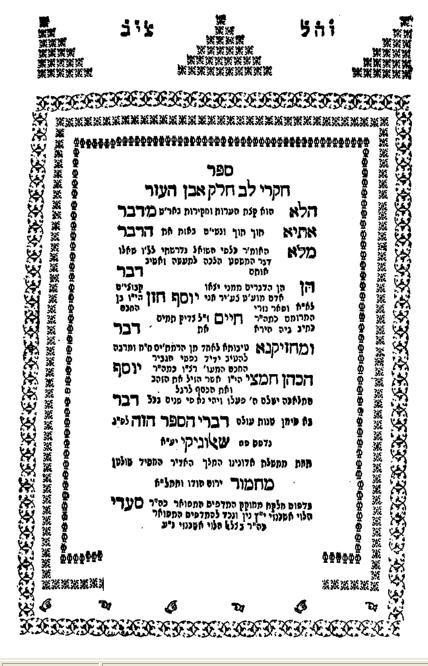 In 3598/164 B.C.E., the stones that gentiles set up in the Beis Hamikdash during the rule of the Greeks were removed.

Harav Refael Yosef Chazan was born in 5501/1740 in Izmir, Turkey. His father was Harav Chaim, the son of Harav David Chazan, mechaber of Chozeh David, a peirush on Tehillim. It was after this grandfather that Reb Chaim named his son Yosef.

Reb Refael Yosef unfortunately lost his father at a young age. He wrote about this period in the hakdamah of his sefer Chikrei Lev, expressing gratitude to all those who cared for him during those years and making special note of the support and encouragement offered by his father-in-law and other family members.

The hasmadah of young Refael Yosef was legendary. He gave his first public shiur at the age of 17.

Reb Refael Yosef delivered many fiery drashos, speaking from the heart and causing his listeners to improve themselves in the issues that he spoke about.

Reb Refael Yosef had a strong desire to go to Eretz Yisrael. His dream finally came true, and he was zocheh to move to Eretz Yisrael in 5573/1813, settling first in Chevron. He was appointed Rav in Chevron almost immediately after establishing himself there.

Two years after his arrival in Eretz Yisrael, the Rishon LeTzion, Harav Yaakov Koral, zt”l, was niftar, and he was asked to succeed him. Reb Refael Yosef consented to the request.

Once appointed to this position of honor, Reb Refael Yosef became the leader of all communities, Ashkenazim and Sephardim. Despite becoming Rishon LeTzion at an advanced age, Reb Refael Yosef fearlessly initiated new takanos in Yerushalayim.

Reb Refael Yosef left 13 volumes of his classic, Chikrei Lev, covering thousands of teshuvos on all topics of Torah and halachah. His many drashos were published in the two-volume Maarchei Lev, which was printed in Salonika directly after his petirah, in the years 5581-82/1821-22.

In 1935, Parker Brothers began marketing the board game “Monopoly.”