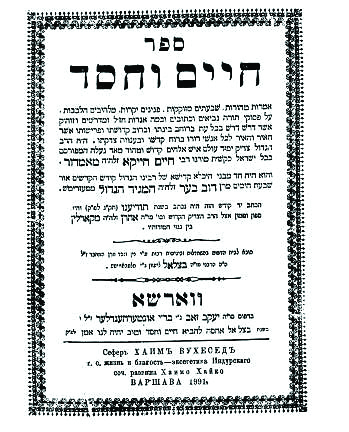 In 2449/1312 B.C.E., Bnei Yisrael began building the Mishkan. The construction of the Mishkan was completed on 25 Kislev; but Hashem’s command to erect the edifice came only three months later, on 23 Adar, when Moshe was instructed to begin a seven-day training period.

Harav Chaim Chaika (Chaikel) Levin was the son of Harav Shmuel. The family descended from many leading Rabbanim.

In his youth, Reb Chaikel was known as a genius in learning and an outstanding masmid. He was a talmid of the Vilna Gaon.

Drawn to the ways of Chassidus, he became a Chassid of the Mezritcher Maggid. The Maggid spoke of Reb Chaikel even before he came to Mezritch, telling his Chassidim that there was a menorah in Amdura that was lacking only the match to light it.

How did it happen that he became a Chassid? The Mezritcher Maggid once told his close Chassid, Reb Aharon of Karlin, when he took his leave, to return with “good merchandise.”

When Reb Aharon chanced upon Reb Chaikel, he understood that this was what, or whom, the Rebbe was referring to. Reb Aharon met Reb Chaikel and asked him why he didn’t learn Torah lishmah. Reb Chaikel answered him in surprise, “But how am I learning — not lishmah?” Reb Aharon answered him, “If so, you are making the Tanna Rabi Meir a liar.” (This was a reference to the Mishnah that he who learns Torah lishmah receives many good things; since Reb Chaikel didn’t have all the things mentioned by Rabi Meir in the Mishnah, he was effectively refuting Rabi Meir.)

Reb Aharon walked away, but Reb Chaikel ran after him and asked him how one reached the level of learning Torah lishmah. Reb Aharon answered that he himself didn’t know the answer; he added that if Reb Chaikel would like to find out, he should travel to his Rebbe, in Mezritch, and ask him.

Together they went to Mezritch, where Reb Chaikel became a devoted Chassid of the Maggid.

After the petirah of the Maggid, the Chassidim wanted Reb Chaikel to be their Rebbe, but he refused.

On Tuesday, 23 Adar 5547/1787, two days after the petirah of his close colleague the Rebbe Reb Elimelech of Lizhensk, Reb Chaikel was niftar. He was buried in Amdur.

For many years, Reb Chaikel’s divrei Torah remained in manuscript form; they were not published until 5651/1891, more than 100 years after his petirah. When his sefer was finally published with the title Chaim Vachessed, it received many warm haskamos from the leading Gedolim of that era.

In 1931, “The Star-Spangled Banner” became the national anthem of the United States after President Herbert Hoover signed a congressional resolution.

In 1996, Israel declared “total war” against the militant group Hamas after a bus bomb in Jerusalem killed 19 people, including the bomber, the third such suicide attack in eight days.