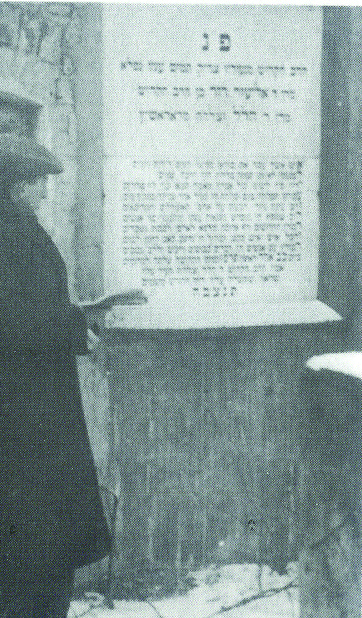 In 5109/1349, the Jews of Uberlingen, Switzerland, were massacred al kiddush Hashem.

In 5190/1430, a miracle happened in the kehillah of Rome. When the authorities decreed that every Jew must either convert or be killed, an earthquake rocked the city and the decree was annulled.

In 5693/1933, the infamous Dachau concentration camp was established in Germany. The camp, one of the first established by the Nazis, was originally designated as a prison camp for political criminals of the Nazi party.

After Kristallnacht, the number of Jews imprisoned there kept growing until over 200,000 victims passed through its gates, most of whom perished. The Nazis built a gas chamber in Dachau, but it was never used. This concentration camp was liberated in April of 1945 by the U.S. Army.

Following the petirah of his father on 23 Teves 5661/1901, Reb Eliezer Dovid was appointed Rebbe in Radoshitz.

Reb Eliezer Dovid was known as a tzaddik who led an ascetic lifestyle. He undertook many fasts. He would eat frugally, and even when he ate, he ingested only the barest minimum.

Reb Eliezer Dovid would spend many long hours davening, standing up all the while.

He was famously known for his mofsim. At times, he would only answer requests after immersing in the mikveh; some days he would immerse himself dozens of times. He would also demand that those who came to request his brachos would first tovel. He could tell who had been in the mikveh and who hadn’t.

Thousands of petitioners flocked to his court, and many stories are related of the miracles that he worked.

Reb Eliezer Dovid spoke with his chassidim in Lashon Hakodesh, and on Shabbos he would only converse in that language.

In his later years, Reb Eliezer Dovid was blind. But despite not being physically able to see them, he would recognize anyone who had been before in Radoshitz.

Reb Eliezer Dovid was succeeded as Rebbe in Radoshitz by his son Harav Chaim Asher. His other son was Harav Yisrael Yosef, who was appointed Rav of Radoshitz. Reb Eliezer Dovid’s son-in-law was Harav Elimelech Yaakov Yitzchak Rabinowitz of Sochdenyov.

In 1789, the Constitution of the United States went into effect as the first Federal Congress met in New York. (The lawmakers then adjourned for lack of a quorum.)

In 1813, President James Madison was inaugurated for a second term of office.

In 1861, Abraham Lincoln was inaugurated as the 16th president of the United States.

The Confederate States of America adopted as its flag the original version of the Stars and Bars.

In 1863, the Idaho Territory was created.

In 1987, President Ronald Reagan addressed the nation on the Iran-Contra affair, acknowledging that his overtures to Iran had “deteriorated” into an arms-for-hostages deal.