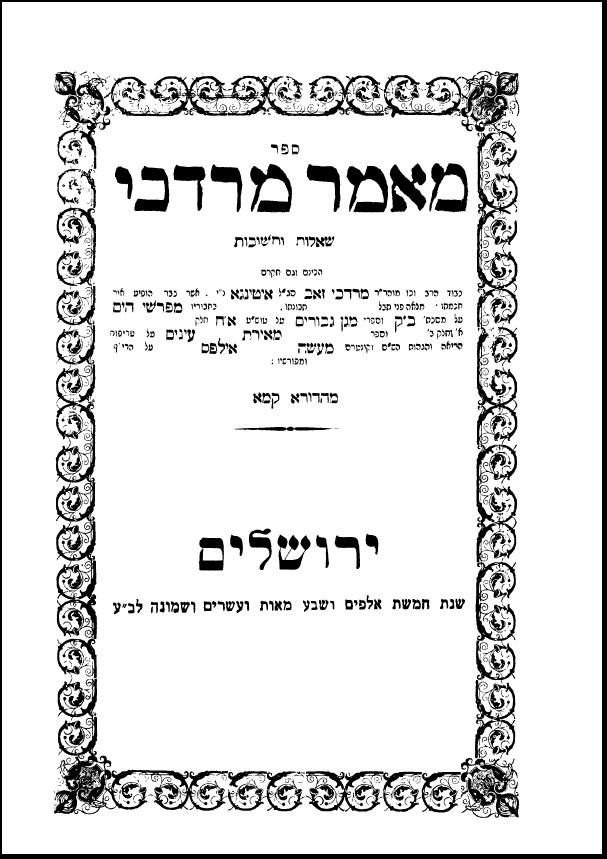 Harav Mordechai Zev Itinga was the son of Harav Yitzchak Aharon. He was born in 5565/1805.

Reb Mordechai Zev was renowned as an outstanding talmid chacham who dedicated all his time to learning Torah. Although he could have served as a Rav, Reb Mordechai Zev preferred not to support himself from Torah.

His greatness in Torah and halachah is evident in his Maamar Mordechai, his correspondence with the other Gedolim of his generation. His other sefarim include Magen Gibborim, on Shulchan Aruch Orach Chaim, which has become one of the basic sefarim on Orach Chaim; and his notes, written together with his brother-in-law Harav Yosef Shaul Natanzohn under the name Mefarshei Hayam are also well known.

Reb Mordechai Zev was also known for his acts of tzedakah and chessed, especially towards the poor of Eretz Yisrael.

In 1692, the first official execution resulting from the Salem witch trials in Massachusetts took place as Bridget Bishop was hanged.

In 1861, during the Civil War, Confederate troops routed Union soldiers in the Battle of Big Bethel in Virginia.

In 1942, during World War II, German forces massacred 173 male residents of Lidice, Czechoslovakia, in retaliation for the killing of Nazi official Reinhard Heydrich.

In 1963, President John F. Kennedy signed into law the Equal Pay Act of 1963, aimed at eliminating wage disparities based on gender. The same day, Kennedy delivered a commencement address at American University in Washington, D.C., in which he declared, “If we cannot end now our differences, at least we can make the world safe for diversity.”

In 1967, the Middle East War ended as Israel and Syria
agreed to observe a United Nations–mediated cease-fire.