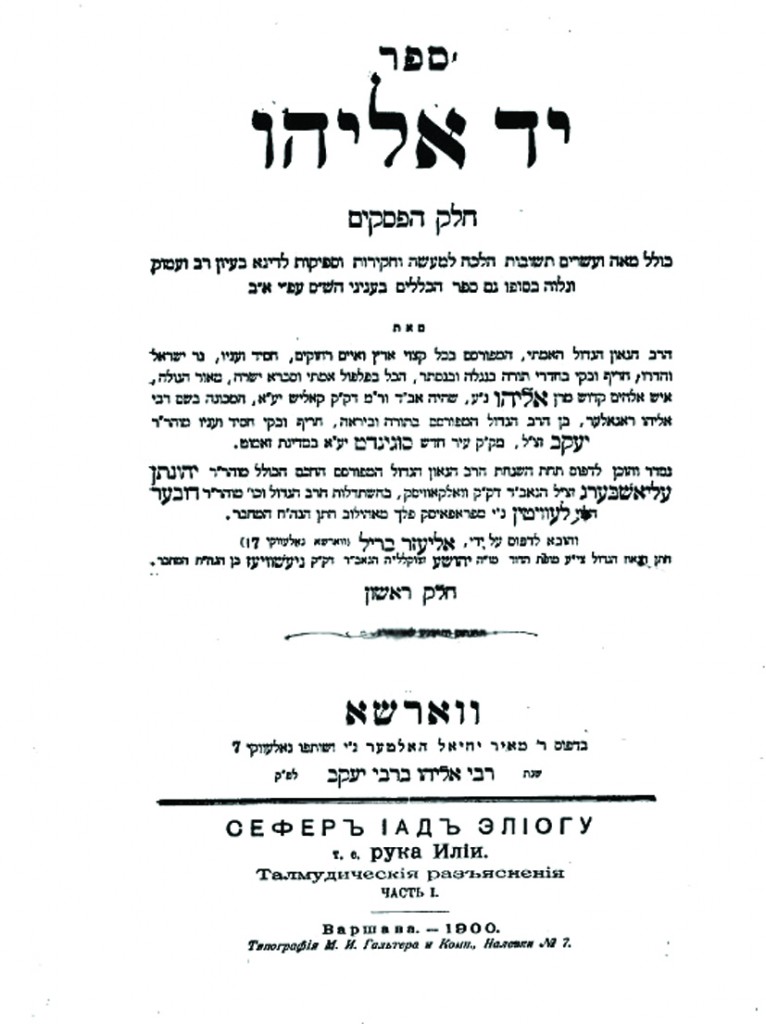 In 5767/1906, the Chofetz Chaim completed his monumental work, the Mishnah Berurah.

Harav Eliyahu Rogler was born in 5554/1794 in Soginad, near Zamut, Lithuania, at the Prussian border. His father Reb Yaakov was a talmid chacham who managed to conceal his lofty ways. He ran a hotel; after the guests were asleep, he would learn until the morning. The family descended from the Chacham Tzvi and Harav Mordechai Yaffe, the Levush.

In his youth, Eliyahu learned under his father. Shortly after his bar mitzvah, he was betrothed to the daughter of Reb Dovid Gardomer. Reb Dovid was an affluent man, who willingly undertook to support a chassan who would devote himself to learning.

Reb Eliyahu was known for his derech halimud: beginning with the Rishonim and learning their sefarim thoroughly, then going on to the Acharonim.

Reb Eliyahu went to Volozhin, where he was a talmid of Harav Chaim Volozhiner. When he returned home, both Reb Eliyahu’s father and his father-in-law had come upon hard times and could no longer support him, so he was forced to seek a post as Rav.

His first rabbinic position was in Shott, near Kaidan.

Three years later, in 5584/1824, he was offered the position of Rav in William-Pally, near Kovno. He headed a yeshivah there, attracting hundreds of bachurim.

In 5608/1848, Reb Eliyahu fell ill and became bedridden. He wrote a letter to the kehillah absolving them of responsibility to him and allowing them to appoint a new Rav, as he could no longer function at full capacity.

Reb Eliyahu was niftar on 19 Cheshvan 5610/1849, and was buried the next day. He was buried near the kever of the Magen Avraham.

Many of his teshuvos were published as She’eilos U’Teshuvos Yad Eliyahu.

In 1910, Blanche S. Scott became the first woman to make a public solo airplane flight, reaching an altitude of 12 feet at a park in Fort Wayne, Ind.

In 1915, tens of thousands of women marched in New York City for the right to vote.

In 1942, during World War II, Britain launched a major offensive against Axis forces at El Alamein in Egypt, resulting in an Allied victory.

In 1954, West Germany was invited to join the North Atlantic Treaty Organization, which it did the following year.

In 1956, a student-sparked revolt against Hungary’s communist rule began; as the revolution spread, Soviet forces started to enter the country, and the uprising was supressed within weeks.

In 1980, the resignation of Soviet Premier Alexei N. Kosygin was announced.

In 1983, 241 U.S. service members, most of them Marines, were killed in a suicide truck-bombing at Beirut International Airport in Lebanon. A near-simultaneous attack on French forces killed 58 paratroopers.

In 1991, Cambodia’s warring factions and representatives of 18 other nations signed a peace treaty in Paris.

In 2001, the nation’s anthrax scare hit the White House with the discovery of a small concentration of spores at an offsite mail processing center. President George W. Bush announced that he authorized money for improved post office security following the deaths of two postal workers from inhalation anthrax.